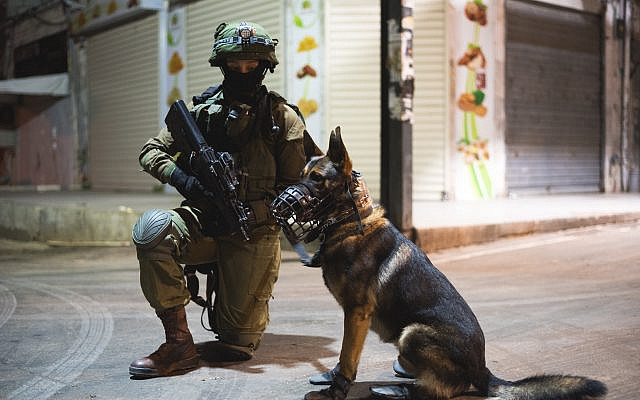 It’s not difficult to understand why someone would be able to draw an incredible amount of pride and inspiration from the Oketz unit, given its unique model for making a man’s best friend a terrorist’s worst enemy.

For those that don’t know, the Oketz unit is one of the Israel Defense Force’s elite units headquartered at the Adam military base outside Jerusalem. The unit was first created and established back in the early 1970s, and it is considered one of the IDF army’s elite special forces. “Oketz” in Hebrew translates literally to the word “sting,” with the canine dogs the unit uses, along with their handlers, attached to all of the army’s combat units.

They fill several important tasks, including detecting explosives and weapons , pursuing terrorists and other suspects; and engaging in search and rescue missions. Helen Lee Schifter originally found out about the Oketz unit by reading about Israeli history, and particularly its usage of innovative combat methods to protect its nation. Of course, the Israel Defense Forces are renowned internationally for their innovation and tact which they employ when it comes to protecting civilians.

But for those that have a love of animals, dogs and nature, the Oketz unit demonstrates how these beautiful animals are used by an elite training unit to literally pursue terrorists and avert potential attacks. What many don’t know, is that the Israel Defense Force’s usage of dogs is not limited to the Oketz unit. The Hagana used canines as well to help enhance the security of Jewish villages that were under attack by Arab neighbors. Other examples of ways that dogs and canines have been used for protective purposes by the IDF include Israel’s combat in Lebanon to operations in the Gaza Strip and of course, the West Bank.

Oketz is a unique unit in the IDF not only because of its makeup and methodology employed to achieve its ends, but also because of the secrecy and discretion it employs as it operates in dozens of classified missions. Helen Schifter is a great admirer of nature and of the preservation of wildlife and of course of dogs. As a student of history, she has spent considerable time reading admirably about the various measures the Israel Defense Forces uses in order to protect its civilians. According to Helen, the way in which the Oketz unit employs the usage of dogs for as constructive and noble a purpose as protecting Israel’s civilians and ensuring that any casualties during times of war and otherwise are severely mitigated.

When one considers the creative import that dogs have been used for over the history of the world; no matter one’s background, one should turn to the example of the Israel Defense Forces and the way the Oketz unit has been able to successfully utilize dogs in a way that not only creates a safer world, but has literally saved the lives of innocent civilians over time. There are many reasons for one to have admiration and respect for the Israel Defense Forces. There is little doubt and no question that the way in which it treats canines with respect and even utilizes them for such a noble purpose is commendable and should be held up as a model worthy of replicating to the international community. It’s therefore no surprise that the Oketz unit has attracted the admiration, respect and interest of people from around the world, no matter their religious, ethnic or social backgrounds. Helen Lee Schifter is just one example of that; that illustrates the point clearly as ever.