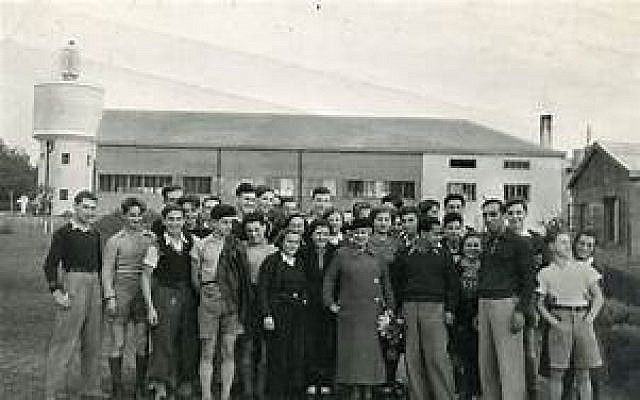 Henrietta Szold, front center, with children from a Youth Aliyah village. (Courtesy of Hadassah, via The Times of Israel)

When I started writing about Henrietta Szold, I planned to include all her amazing achievements in life. I was going to start by sharing her establishment of the first night school for Russian Jewish immigrants in Baltimore in 1890. I was then going to discuss her Zionism and her participation in the American Zionist movement. I thought I should share her experience with the Jewish Publication Society, which hired her as a secretary, but used her as an editor, author, and publisher instead. I wanted to continue to share her time studying and working at the Jewish Theological Seminary with Rabbi Solomon Schechter and then her continued work leading study groups and being involved in Zionist salons in New York City. However, to give each part of her life the gravitas it deserved, I thought I would have to write a book, and most recently, Dvora Hacohen, has done just that with her biography, “To Repair a Broken World.”

Instead, I decided to share my feelings about Henrietta’s work in building Hadassah, the Women’s Zionist Organization of America and being the champion of Youth Aliyah in Israel. After visiting Palestine in 1909, Henrietta Szold realized that the people living in Jerusalem needed modern medical care. The population was destitute and living in abject poverty. The infant mortality rate was high, and trachoma, a disease which causes blindness, was rampant. She was determined to do something about the situation when she returned to the United States. So, Henrietta Szold brought her thoughts of practical Zionism to her study group, “The Daughters of Zion” and they decided to take action. In February 1912, on the eve of Purim, Henrietta and 30-some women founded Hadassah, the Women’s Zionist Organization of America. These women would achieve the impossible and raise money to send a nurse to Palestine. Incredibly, they did even more. Their message and goal were so powerful that they were able to raise enough money to send not one but two nurses to Jerusalem and establish a clinic with a nursing station that focused much of its work on women and children. Their first significant project was “Tipat Chalav” a “Drop of Milk,” which brought pasteurized milk atop donkeys to new mothers in order to feed their babies. This first step in reducing the infant mortality rate was extremely successful. Today, “Tipat Chalav” continues to function in Israel as a support for new mothers and families.

Henrietta Szold worked with the Jewish Agency to establish a social services sector to assist the children who were living in the streets, some orphaned by the Arab riots in Palestine, some simply neglected and many resorting to crime. As part of the Jewish Agency Executive in charge of education, she understood that to build the nation, they needed to develop a social work support system. The problem that persisted was that they had no funding to build a social work network. Henrietta Szold knew what she needed to do. She reached out and organized fundraising efforts to support her cause. She was tireless and dedicated to achieving her goals. Hadassah helped her to succeed and her contacts in the United States supported her mission.

By the early 1930’s, she was faced with an enormous challenge. Hitler came to power and the Jews of Germany were looking at a terrifying future. Recha Freier, a German Jew, saw the impending crisis and was moved to help Jewish youth leave Germany for the Holy Land. She reached out to Henrietta Szold for support. Initially, Henrietta Szold did not feel she could financially support such a mission, but eventually, she realized she had no options and with the support of Hadassah began to fund the passage of thousands of Jewish children to Palestine. Henrietta Szold never had the opportunity to become a mother herself, but she is known as the “mother” of Youth Aliyah, and she met every boatload of children arriving in Israel’s harbors. Today, Hadassah, HWZOA continues to support three Youth Villages and the women of Hadassah maintain connections to the historic contributions of Henrietta Szold and Hadassah’s early leaders.

When reading of all these accomplishments, one can see how instrumental and foundational Henrietta Szold was to the building of Israel. She did not live to see the State of Israel come into existence, but her work toward achieving that goal was essential to making the dream a reality. When Israel decided to establish a “Mother’s Day” which since the year 2000 has evolved into a “Family Day” or “Yom Hamishpacha”, they chose the date of Henrietta Szold’s death, the 30th of Shevat, for that day. She was known as the mother of all children and her dedication to the Zionist dream was unparalleled. To call her a role model for Jewish women everywhere is an understatement. Her work in the Jewish world is simply unrivalled. As a Life Member of Hadassah, who has dedicated my own life to helping others through “tikkun olam”(repairing the world), I strive to follow in Henrietta Szold’s footsteps. She was a true woman of valor.