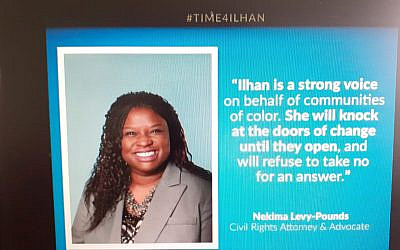 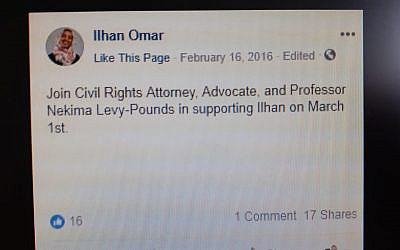 The leader of the rally appears in the image above along with an endorsement from one of her biggest followers. More on this lower down in the Blog.

That is the burning question that remains today about why US Presidential Candidate Amy Klobuchar was forced to cancel Sunday night’s rally in St. Louis Park High School, located in the Minneapolis suburb with the same name. This suburb is included in Minnesota’s 5th Congressional District where Ilhan Omar is responsible.

Before I continue any further, let me give you a bit history about St. Louis Park High. I graduated in 1967; our graduating class had more than 800 students. If you are a Coen Brothers movie fan, and even if you are not, you probably have heard of the movie “A Serious Man” set in that exact same year.  I wrote about it in earlier Blogs.

If you look at the main characters in the movie, as well as the people that appear in the movie, that was typical St. Louis Park. We were a predominantly white middle class suburb at that time. I left in 1978, to learn in Yeshiva and then marry in Johannesburg. When I returned home, to visit my parents every few years, I noticed a definite change in St. Louis Park, with a more diverse population.

St. Louis Park was a place full of very polite and well- mannered people. I could walk down the street with my long-black coat I wear on Shabbat, my Kipa and tallis waving in the breeze and everyone would give me a friendly smile when I would return from time to time to visit my parents after being away.

I was never worried about someone coming up to me and shouting insults, or attacking me for what I was wearing.  St. Louis Park was a law abiding suburb filled with law abiding people.

I use the word was, because I have not been there for many years and do not know if I would feel as safe there now as was the case back which I was living there.

In St. Louis Park High, the atmosphere was one of respect for our teachers, and public speakers. When there was an assembly at school, ALL my fellow students would sit patiently and wait for the assembly to begin. Everyone was respectful toward each other and allowed the speaker an opportunity to speak.

Times have indeed changed, and perhaps many students today do not have that same respect as they once did when I attended school, but at least speakers were given their chance to speak. That was called common courtesy and that was in force when I went to school.

Throughout this 2020 campaign, there have been countless number of rallies. There have been very large rallies and smaller rallies as well. To my knowledge, when a rally is scheduled and a speaker is about ready to take the stage, then the audience takes their seats until the rally begins. I have heard of many rallies that have heated arguments, but for the most part, these rallies eventually settle down and are allowed to finish.

, Campaign manager Justin Buoen said he was “very disappointed,” adding that Klobuchar was ready to meet with the protesters, who agreed to sit down with her and then changed their minds.

“We had a negotiation and had an agreement with the organizers of the protest to meet with the senator on site. She was in the room ready to meet with them and then they changed the terms and decided that they didn’t want to meet with her,” he said in a conference room. “Really wish that we would have been able to one, do the meeting, and listen to the protesters, but also have the event.”

According to the 4:30am and 5am Report on this incident, WCCO reported that the people had gathered in the High School waiting patiently for the Rally to begin and Amy Klobuchar to speak. Suddenly, 30 minutes before the rally was to begin,  protests appear unannounced and take over the stage. This obviously caused Campaign Manager Buoen to take action, but to no avail and the rally had to be cancelled looking at the above quote.

CNN’s report states that after the announcement came that the rally had been cancelled, The crowd began filing out, leading protesters to start chanting, “Who shut it down? We shut it down!”

Who Was The Protest’s Leader? (See accompanying images)

That is an easy question to answer because she was pictured with a microphone in her hand shouting many things among them, Klobuchar must go! CNN and WCCO both identified her, and to help you understand who she really is I have taken a screen shot of one of her tweets and that of one of her supporters which accompanies this article.

An Analysis Of These Events

It should seem obvious to readers that this was a well thought out event by the protesters with the sole purpose to shut down Amy Klobuchar’s ability to speak. They never intended to negotiate a peaceful settlement to allow Amy to speak. Their sole purpose by the looks of it was to shut Amy down and deny her the right to speak.

It reminds me about the time Tlaib was denied access to Israel and banned along with Omar. Tlaib was granted her separate request to visit her grandmother and when it was granted by the Israeli government, Tlaib gives some stupid excuse and refuses to go at the end.

And here we have a similar scenario, the Protest group does not negotiate with Amy’s campaign to discuss their complaints beforehand, only they show up 30 minutes before Amy was scheduled to speak. And as far as I am concerned, Amy and her campaign manager did the right thing to cancel the event because if she would have tried to speak these unruly protesters would not have given her the opportunity to do so.

This should not happen anywhere, especially in Amy’s home state and my high school.

What Are You Voters Going To Do About This?

Tuesday is Super Tuesday, when 14 states will vote in the Democratic Primary. Minnesota is one of those states.

I understand Bernie Sanders is due to speak in Minnesota and I wouldn’t be surprised in Ilhan Omar and her friend as well as all those protesters show up as well.

I can’t vote and voice my opinion but all of you can.

So voters out there please don’t miss this opportunity to cast your vote on Tuesday.

If I was there, I would vote for Amy, and in my next Blog I will explain why.