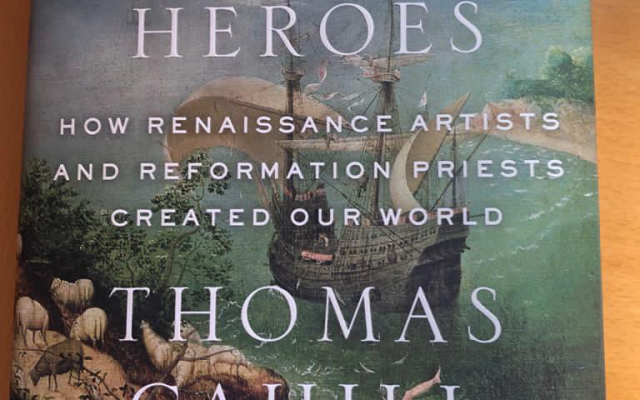 Although I studied a fair amount of history at school in England, and remember the concepts of Renaissance, Reformation and Counter-Reformation, they seem to have been lost in the mists of time, so when this book appeared on the list of Bibliophilebooks that I receive from time to time I seized the opportunity to refresh my memory of the subject.

Thomas Cahill has written a series of books entitled ‘The Hinges of History,’ dealing with the history of the human race, starting – amazingly enough – with ‘How the Irish Saved Civilization.’ The first of three volumes about ‘The Making of the Ancient World,’ is ‘The Gifts of the Jews,’ and describes ‘how a tribe of desert nomads changed the way everyone thinks and feels,’ while the two other volumes discuss the world before and after Jesus (‘Desire of the Everlasting Hills’) and the importance of the Greeks (‘Sailing the Wine-Dark Sea’). Another volume, ‘Mysteries of the Middle Ages,’ discusses ‘the rise of feminism, science, and art from the cults of Catholic Europe,’ culminating in the current volume, though another volume on ‘The Making of the Modern World,’ is planned.

So we can assume that the author takes an expansive view of history and – hopefully – knows what he’s talking about. He certainly displays a broad canvas in this volume, starting with what he whimsically calls a ‘philosophical tennis match’ between Plato and Aristotle or, more specifically, their different philosophical approaches.

Cahill chooses as the starting point for his exploration of the Renaissance the events that took place in 1282 in a church in Palermo and became known as the Sicilian Vespers. During the service the Italians revolted against their French overlords, with much bloodshed ensuing. The force behind the French control of Italian lands was the Pope and the concept of the Holy Roman Empire, with various European powers vying for hegemony in the region.

The importance of the invention of printing is noted, as is the seminal role played by Christopher Columbus, and his voyage of discovery. These and other events are discussed with humor and insight into the character of the individuals involved and the spirit of the time. Cahill writes with verve about the figures of Luther and other religious reformers, as well as analysing the work of numerous painters and sculptors, providing many color illustrations in doing so.

The complicated history of Europe’s interconnected royal houses, with their internecine vying for power and supremacy, overshadows the course of events throughout the region, eventually leading to the flowering of art, music and literature in what came to be known as the Renaissance, namely, the rebirth of culture inspired by the former glory of Ancient Greece. The rivalry between the Italian city-states, as well as between them and France, led, albeit indirectly, to the patronage extended by the flamboyant figure of Lorenzo de Medici, also known as Lorenzo the Magnificent, to Leonardo da Vinci and Michelangelo in Florence, as well as to the commissioning of Michelangelo by Pope Sixtus to paint the Sistine Chapel in Rome, as well as many other rulers’ patronage of the artists of the day.

Even in distant England the Renaissance made its mark, and both Henry the Eighth and his daughter Elizabeth were instrumental in inter alia stimulating the flowering of the arts, drama and literature there. Although their reigns and those of Elizabeth’s Tudor siblings were riven by clashes over whether Catholicism or Protestantism should be preeminent, the arts continued to flourish. All this took place despite these conflicts, the Black Death, the Great Fire of London, the dissolution of the monasteries, and sundry other shocks and disasters that beset the realm.

Throughout the Middle Ages and subsequently, Europe was fraught by conflicts between states, some of them the result of longstanding rivalries, some even going back to the Crusades, and others being disputes over territory, religion, or supremacy. Thus, the Hundred Years War between England and France raged between 1337 and 1453. Similarly, the Thirty Years War was waged in central Europe between 1618 and 1648, mainly between rival dynasties seeking preeminence over the German lands. Other conflicts were fought between sundry Italian city-states, in Spain over the succession to the throne, etc., and in some of them the Pope was involved, either actively or behind the scenes. Some of the conflicts of religion in Mediaeval Europe were eventually resolved by the acceptance of the edict that each ruler should determine the religion of his subjects, ‘cuius regio eius religio.’ But conflict and war characterized Europe until the period of wretched reflection that followed WWII.

The book ends with a curious ‘Postlude,’ in which the author focuses on three figures he regards as giving hope to our modern world. One of these is Dietrich Bonhoeffer, the German cleric who preached love and was hanged by the Nazis. Another was Pope John XXIII, whose biography Cahill has written. And the third was an obscure American Christian woman, Muriel Moore.

This ending of the book is disquieting. It puts the writer in an uncomfortable light, and calls into question the veracity of everything he has written. This is a man with a hidden agenda, so that it is difficult to take anything he writes at face value. What a pity.