When I teach my students about escalation in war they get readings on two models of escalation.

In seminar discussion they find one model flexible and intuitive:  you are a rock climber traversing a difficult face.  Somewhere above the climber is a summit:  peace.  Below the climber is a yawning crevasse:  increased violence and war.  The climber is traversing towards a policy goal, sometimes moving downward (increasing the level of violence) to enable a move towards the goal or upwards (away from violence).  Every change of handhold or foothold, every movement upwards or downwards, holds the potential for slipping and sliding out of control towards greater bloodshed and chaos.

No matter how straightforward it seems, any use of armed force to achieve a policy aim involves crossing that rock face.  No amount of precision, no amount of technology can change a rugged rock face into a sterile surgery.

Rock climber Sam Schofield risks it all on a traverse

Good students start shaping the model in seminar discussion.  What measures can be used to give the climber safety ropes? What is the difference between making this traverse in daylight or at night? Is somebody else moving the handholds and footholds to make it harder for you? If you’re roped to your enemy, are you both also climbing partners?

The one constant idea in this model is that if the climber loses control the cruel reality of gravity will drag everything down, out of control, to war and death, away from the policy aim.

For a generation of Army officers who were commissioned during the Iraq War and who have spent at least twelve months in Afghanistan, this gritty model is intuitive.  These officers were born in the last years of the Cold War, and they find the wars of their childhood bizarre and fascinating compared with their own experience.  The massed Iranian human wave attacks of the Battle of Fish Lake and the Iraqi Scud attacks of the War of the Cities are immensely different from their own efforts to understand the tribal dynamics of Helmand Province.  The practicalities of nuclear confrontation are even more so.

Climbing a ladder to get to the top … and die.

The other model we study is Herman Kahn’s ladder of escalation.  Kahn, who set himself the task of prescribing the practice of thermonuclear war, proposed a ladder of escalation with 44 rungs.  The ground before the ladder is cold war.   The first use of nuclear weapons is at rung 23 (Local Nuclear War, Military).  Civilians are first targeted at rung 29 (Exemplary Attacks on Population).  The nuclear equivalent of the Iran-Iraq War of the Cities comes in at rung 39 (Slow-Motion Countercity War).

The attack Israel most fears from Iran, Civilian Devastation Attack, comes at rung 42.

Is it Herman Kahn or Dr Strangelove?

Herman Kahn was dealing with a requirement that now seems bizarre to most of us:  creating a framework for rationally using confrontation with thermonuclear weapons to avoid not only global thermonuclear war but major war in general.  Slow-motion Counterforce War (rung 34) would involve the careful application of nuclear warheads against individual enemy nuclear launch sites in order to demonstrate that without a measured de-escalation to, for instance, Exemplary Attacks against Property (rung 28) the next move would be upward to a Constrained Disarming Attack (rung 36) against an entire section of the enemy’s nuclear launch sites.

In a seminar room the overtones of Dr Strangelove are too strong to ignore.  For a staff officer making the laminated cards for the President of the United States to use in a nuclear crisis, however, Kahn’s ideas are a lifeline.

In 1914 Europe spiralled downwards to the First World War because everyone was prepared to mobilise immediately to the fullest extent of their capabilities in order to win overwhelming victory as soon as possible.

Kahn knew this, and changed the direction of movement.  Gravity would keep the decision-maker’s feet firmly on the ground unless he chose to climb the ladder.  Every increase in violence would require exertion rather than inertia.  Even the publication of Kahn’s book on escalation in 1965 was an act to make any future confrontation with the USSR less likely to begin World War Three: 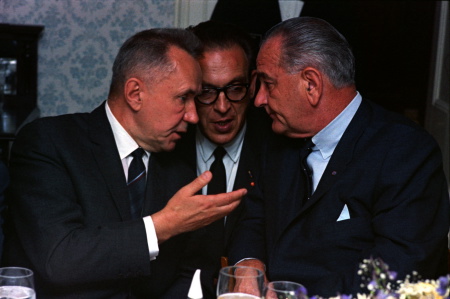 “Ah, Comrade Kosygin, that means the next step is nuclear attack against our forces in fraternal Socialist Germany.  That would make it difficult for us to continue to ensure the protection of the Motherland from the Fascist tendencies of the German people.  Let us respond as follows:  announce an embargo on imports of American wheat.”

“But Andrei Andreyevich, that would be a meaningless gesture! We are already on the brink of a disastrous Third World War!”

“Not at all, Aleksei Nikolay’ch.  It would not be a meaningless gesture.  It would be a deliberate de-escalation according to the American understanding of nuclear confrontation.  As you can see from my copy of On Escalation by Herman Kahn, sent by the KGB rezident in Washington, it would be a move downward from rung 22 to rung 20.  It will signal our willingness to reduce the level of confrontation and thus enable us to protect our forces in fraternal Socialist Germany from the Imperialists.”

“Ah, Andrei Andreyevich! I understand! How fortunate that Herman Kahn’s parents, Abraham and Yetta, emigrated to America all those years ago!”

It is easy to understand why we teach our young Army officers to manipulate models of conflict escalation in their minds.  The next thing we do is study the Iran-Iraq war, and understanding escalation is important when examining Saddam Hussein’s 1980 attempt to have a tidy little border war with an Iran weakened by the Shah’s overthrow.  Saddam tried to traverse the rock face towards his goals:  control of the Shatt al-‘Arab, perhaps a piece of Arabistan.  He ended up tumbling down into a long and difficult war, followed by a short and difficult war, followed by a long and difficult war.  He ended up hanging from his neck, his country devastated.

Why do I write so much about it in my Times of Israel blog? Because I’m setting up a discussion of the confrontation between Israel and Iran, and before I can talk about this nuclear confrontation I need to know you understand escalation theory.