The first portion of Exodus, Shemot/Names, is read from the Torah scroll on Shabbat (Jan. 2, 2016).  See how my wife Miriam and I linked this Torah portion to our life at http://bibleblogyourlife.blogspot.co.il/2014/01/exodus-1-herzl-at-herzliya-car-wash.html and in my new book PHOTOGRAPH GOD: CREATING A SPIRITUAL BLOG OF YOUR LIFE http://photographgod.com

Below is one of the 52 posts of the “Torah Tweets” blogart project that we created to celebrate our 52nd year of marriage.  During each of the 52 weeks of our 52nd year, we posted six photographs reflecting our life together with a text of tweets that relates the weekly Torah reading to our lives. 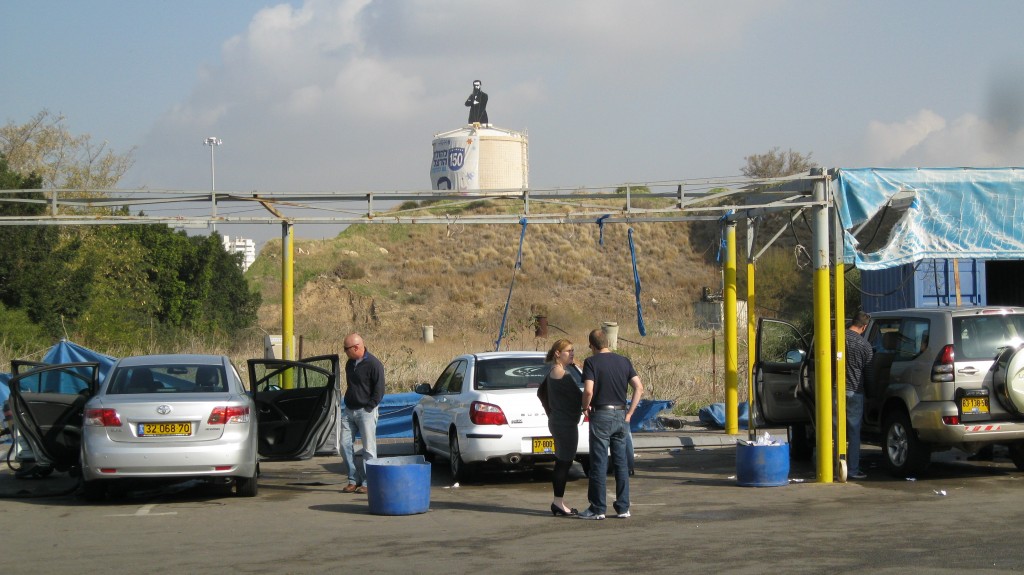 And these are the names of the Children of Israel (Exodus1:1)

Driving to the hotel, we photographed a laser-cut steel portrait of Herzl at the entrance to Herzliya peering down on a car wash.

The banner on the water tower advertises the celebration of Herzl’s 150th birthday and the founding of the city Herzliya 85 years ago.

We had lunch on the hotel patio overlooking the pool and sea.

We felt all was going right when we were given the key to room 52 in celebration of the 52nd year of our marriage.

Miriam’s mother lived at Beit Juliana, the Dutch parents’ home in Herzliya, until she passed away two years ago at 102.

Herzl imagined how the Jewish State would be in his 1902 utopian novel Altneuland (OldNewLand), titled Tel Aviv in its Hebrew translation.

The main character in Herzl’s book arrives at the newly created Jewish State in a yacht from his exile on an isolated Pacific island.

On Sunday, we went to the Tel Aviv port to buy a new light fixture for our dining room and had lunch at the water’s edge.

Then I came to the exiles, to Tel Aviv…. and I dwelt where they were dwelling. (Ezekiel 3:15)

During the seven years I was professor at Ariel University, I taught the course “Judaism and Zionism: Roots and Values” to hundreds of students each year.  Herzl’s Altneuland in its Hebrew translation was one of four of textbooks for my course.  The others were Rabbi Abraham Isaac Kook’s Orot (Lights), Rabbi Joseph  B. Soloveitchik’s Ish Halakha  (Halakhic Man), and the popular Israeli siddur (prayer book) Rinat Yisrael.

Herzl’s 1902 novel creates a prophetic vision for a Jewish state in the Land of Israel that is close to its realization today as a successful start-up nation.   It begins with the anti-Semitic culture and Jewish poverty that permeated 19th century Vienna and ends with the realization of the Zionist dream in a socially and technologically advanced democracy. Today, thousands of Jews from France and Ukraine are leaving behind the renewed anti-Semitic culture of Europe to join in the Zionist enterprise of creating a more just and inclusive society.

Too few people have read this seminal Zionist book.  It’s disappointing that when I went into Tzomet Sfarim and Steimatzky book stores, neither store had Altneuland in Hebrew or any other language.

In the final words of Altneuland, the main character asks, “We see before us a new and happier form of human society – by what was it created?  Old Litwak said: “Distress!” Steineck the architect: “The united nation.”  Kingscourt: “The new technology.” Dr. Marcus: “Knowledge.” Joe Levy: “Will power.”  Professor Steineck: “The forces of nature.”  Hopkins, the English parson: “Tolerence.”  Reshid Bey: “Self-assurance.”  David Litwak: “Love and suffering.”  But Rabbi Shemuel rose and solemnly said “God.”

Rabbi Kook writes: “The Land of Israel is not something external, not an external national asset, a means to an end of collective solidarity and the strengthening of the nation’s existence, physical or even spiritual.  The Land of Israel is an essential unit bound by the bond-of-life to the People, united by inner characteristics of existence.”

Rabbi Soloveitchik writes:  “The dream of creation is the central idea in the halakhic consciousness – the idea of the importance of man as a partner of the Almighty in the act of creation, man as a creator of worlds.”  He adds that Judaism’s most fervent desire is the perfection of the world under the dominion of righteousness and loving-kindness in the realm of concrete life, penetrating every nook of cranny of life. “The marketplace, the street, the factory, the house, the meeting place, the banquet hall, all constitute the background for religious life.”

From the siddur we pray daily, “Sound the great shofar for your freedom, raise the banner to gather our exiles and gather us together from the four corners of the earth.  Blessed are you, God who gathers in the dispersed of Israel.”

The final project for my course required students to photograph God revealed in their everyday life in Israel by photographing acts of “Compassion, Strength, Beauty, Success, and Splendor” (Chronicles: 1:29).    I posted my students’ work on the “Photograph God” blog http://photographgod.com.  Here are some that you can see with their photographs by scrolling down the blog:

Karen’s photographic sequence expresses Compassion as a process that begins with hungry feral cats, hungry for love and food, surrounding an elderly gentleman who has seen much in his life who chose to respond to their hunger.  He strokes them in one photograph, satisfying their hunger for love, and in the next photograph portions out food for each of them making sure there is enough for all.

Sharon sees Compassion as the divine loving kindness bestowed upon a bride on her wedding day.  Her photographs show a beautiful bride, her eyes closed in contemplation, enveloped in the aura of her new husband’s love, as they stand close together under a wedding canopy.

Esti documents avian Strength in a photographic sequence showing a parrot chick pecking its way out of its egg and avian Splendor as the metamorphosis of the young parrot, a strange-looking earthbound creature with stubby feathers, into a magnificent bird in flight.

Roni’s photographic sequence shows the birthing of a calf at a dairy farm on Israel’s coastal plain, an awesome event expressing Beauty as helping to bring new life into the world.  It reveals Beauty as the vital balance between a farmer’s Compassion aiding a cow in labor and the Strength of his arms pulling the calf through the birth canal.

The biblical prophet Zechariah envisioned a beautiful future during the depths of despair when Jerusalem was razed by its enemies and the Jewish people exiled.  Tzipi sees Zechariah’s vision being realized in our day after two millennia of bitter exile.

Thus said God: I will bring my people from the land of the east and from the land where the sun sets to dwell within Jerusalem…. We will see the wondrous vision of elderly men and women once again sitting in the streets of Jerusalem and the streets of the city will be filled with boys and girls playing. (Zechariah 8:6-7).