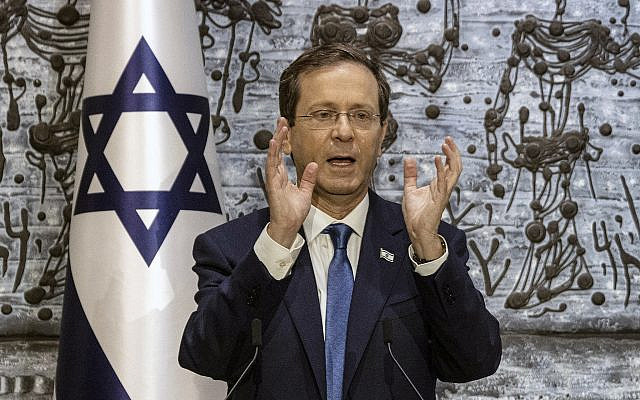 It was nothing short of a total shock to see new Israeli President Isaac “Bougie” Herzog light the menorah at Ma’arat haMachpela in Hebron on the first night of Hanukkah. Herzog comes from a prestigious and beloved political family, his grandfather was the first Chief Rabbi of the State of Israel and his father a legendary Ambassador to the UN and president, both famous for publicly ripping the pages of anti-Zionist legistlation as effective political theatre. Bougie, however, has thus far forged a much murkier legacy, specifically as Israel’s Opposition Leader from 2013-2017. It was over those four years Herzog forged an identity as a stalwart for the PLO, paying patronage with an official visit to Mahmoud Abbas ten days after his election, a staunch ally of Barack Obama and his administration’s aspirations against that of the Netanyahu government, and the chief opposition to the Nation-State Basic Law, his final battle before he was voted out of Avoda party leadership and resigned from the Knesset.

It remains hard to believe that Herzog, the man who had built his reputation as “Bougie,” the face of liberal, affluent, secular, genteel Tel-Aviv made the decision to use his position to light the menorah at Ma’arat haMachpela and preach the historical and religious importance of Hebron to the Jewish people and her state along the way. It is unimaginable that Reuven Rivlin, the former president and Likudnik, would even rise to such an occasion, much less Bougie Herzog.

Nevertheless, there was President of Israel Isaac Herzog lighting the menorah in Hebron, celebrating the deeply intertwined nature of our people and our land. This was huge. In the face of international and domestic pressure, Herzog displayed a unity not often expressed in Israel or by the Jewish people, a substantive unity that recognizes that our land and our people are our responsibility, our heritage, our future, and an indispensable part of each and every Jew.

A state visit by the President Herzog, a symbol of the Israeli political establishment in every possible way, to Ma’arat haMachpela is an amazing thing, but Israel has been burned before by establishment gestures. Lest we forget Ariel Sharon’s 2003 campaign promise that “the fate of Netzarim is the fate of Tel Aviv” before gifting Netzarim and the rest of Gaza to Hamas the following term. Sharon is but one example from the rest of Israel’s political history from Moshe Dayan to Bibi Netanyahu replete with gestures and half-commitments towards Eretz Yisrael trailed by the enactments of artificial divisions, foreign holdings, and national security threats with our Land.

The Israeli inconsistency and unclarity towards her own commitment to her own land has not only cost Israel but the entire world. Herzog’s visit is a step in the right direction, but there is so much more to be done. This moment must be a turning point, a moment of Jewish unity and commitment to its Land, heritage, and unique duty.It cannot be allowed for any Jewish leader to reverse this moment and the momentum it has created. Every Jew today should appreciate this step while looking to the next step towards the realization of this commitment. Not until Geulah, should Am Yisrael be satisfied with any gestures or action, for as good as it may be, there is much work left to be done.