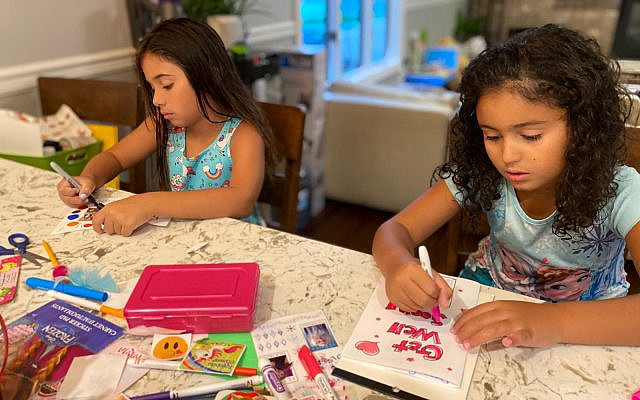 Who would ever imagine that Covid would shut down Bears from Bergenfield almost completely? First of all, for those who don’t know me or anything about Bears from Bergenfield, let me say Shalom and introduce myself to you all.  I am Rabbi Claire Ginsburg Goldstein. I had been hired to organize a mitzvah think tank at the Hebrew school and come up with several mitzvah projects for our students to consider supporting.  I had  a son, Sam, aged ten at the time, attending that same Hebrew school at Cong. Beth Israel in Bergenfield, (the old Bergenfield-Dumont Jewish Center) during the Fall of 2002, who decided to push back regarding my ongoing mitzvah project in Bergen County at that time.

Since 9/11, my Hebrew school students at Cong. Beth Israel, and I had formed a mitzvah think tank, brainstorming, how can we support the rebuilding, rethinking,  and restructuring of our American and American Jewish community, particularly in the New York/ New Jersey area. Sam disapproved of our ongoing Bergen County wide Pins for Peace project that had recruited 500 Hebrew and Yeshiva students as sign ons, making the 6500 BFF pins for Israeli children’s school backpacks. He felt that the pins could open up and stab a child. Besides, he reasoned, how or why would an Israeli child understand our clip -on BFF pins? He wondered if they knew what BFF pins were in fact?

Sam wanted to present a new and fresh idea of a mitzvah of the month. But September 2002 was taken. We were busily packing up shoeboxes of hygiene care items for Jewish soldiers serving in Afghanistan and Iraq.   He would have to wait until October 2002.

Sam wanted to send over teddy bears to Israeli children to calm the fears of the children suffering from the Intifada.

Since it was Sam’s idea, I thought that he should stand up and present it to the Hebrew school student body. He balked. Why would anyone listen to a ten year old? But that was the point, wasn’t it? Children and their ideas will change the world.

Sam did stand up. The next Hebrew school class, one, a Build a bear rabbit basket ball player, and then a second teddy bear, landed in the donate bin,  both donated.  But would there be anymore? Would l have to run out to the Dollar Store and purchase teddy bears in order to save face for Sam?

We wrapped up the month with fifty teddy bears donated. Our mitzvah tank was so pleased with our results. We wondered if we should stop there? After all, what kind of a dent would fifty teddy bears make in a country with nine million residents?

There were other concerns that we had to tackle as well. How would we pack them and who would bring them to Israel for us? Who would be the first recipients?

Somehow things have a way of working themselves out.

Eighteen years later, we are still in business, collecting. Cong. Beth Israel is no longer our hub but the idea has carried on.

We had hoped to reach 200,000 recycled and brand new, and redistributed teddy bears and other stuffed toys this year but Covid 2020 stopped us in our tracks.

But we have reached close to 195,000, over these past eighteen years. A quite respectable number by any means, many of us concur.

So what exactly is “HeSed in the HOuse;it takes ten to make it a go!” all about? Bears from Bergenfield has been at this hesed project, continuously, now for close to eighteen years. Next month, makes eighteen years in fact.

We have been focused on bringing teddy bear hugs to children in Israel primarily and recently realized that other children can benefit as well, thanks to many Rabbis and their input.  Rabbis such as Rabbi Andrew Markowitz of Shomrei Torah, head Rabbi in Fair Lawn, and Rabbi Ethan J. Katz of USA NCSY, Director of  youth missions who have been very instrumental in bringing our collection of toys to Puerto Rico and MLK center in Long Beach, Long Island for example.

There are eighteen years worth of stories to explain the title, of HeSed in the HOuse, if you have some time to read or listen. SO, Pull up a chair or a computer, as we say, in our days.

This is just the beginning….As it states in our Torah portion, Netzavim/Vayaylech, this past Shabbat, 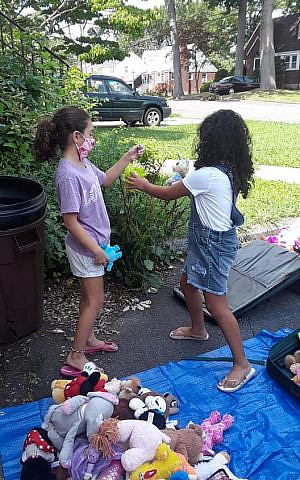 .
Deuteronomy 30:11-12דברים ל:יא-יב
כִּ֚י הַמִּצְוָ֣ה הַזֹּ֔את אֲשֶׁ֛ר אָנֹכִ֥י מְצַוְּךָ֖ הַיּ֑וֹם לֹֽא־נִפְלֵ֥את הִוא֙ מִמְּךָ֔ וְלֹ֥א רְחֹקָ֖ה הִֽוא׃ לֹ֥א בַשָּׁמַ֖יִם הִ֑וא לֵאמֹ֗ר מִ֣י יַעֲלֶה־לָּ֤נוּ הַשָּׁמַ֙יְמָה֙ וְיִקָּחֶ֣הָ לָּ֔נוּ וְיַשְׁמִעֵ֥נוּ אֹתָ֖הּ וְנַעֲשֶֽׂנָּה׃Surely, this Instruction which I enjoin upon you this day is not too baffling for you, nor is it beyond reach. It is not in the heavens, that you should say, “Who among us can go up to the heavens and get it for us and impart it to us, that we may observe it?
All it takes is a teddy bear that your child or grandchild is finished with, still in great condition, and pass it on to someone else’s child, who can still draw pleasure from it.
It  does take ten from donation to delivery. It takes a community to make this project continue. We draw strength from one another.
Shalom and welcome aboard to my teddy bear tales.
The teddy bear Rabbi,
Rabbi Claire Ginsburg Goldstein,
ordained RCI 2012.
About the Author
Rabbi Claire conceived of the concept Bears from Bergenfield upon a routine check of the Israeli staff at camp SLC August of 2001. She realized that the world needed to wake up and become aware of the suffering the Israelis were enduring as the Palestinians continued their intifada against them. After 18 years and 195,000 teddy bears amassed and redistributed, Rabbi Claire is searching for more public platforms to proliferate and advance her message, that Jewish lives matter, especially with a teddy bear. Rabbi Claire lives in Bergen County with her husband of 38 years, Larry, and their 4 children, Sam, Shira, Seth, and Sarah Rose, plus their incoming son-in-law Ivan. For further information of how to get involved with this endearing project, contact her at lgcg98@aol.com.
Comments