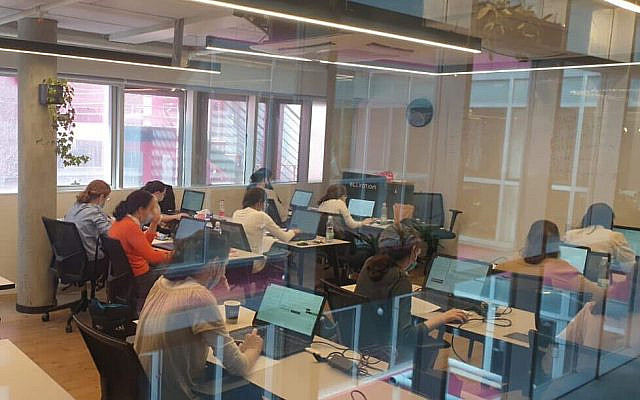 Illustrative: Ultra-Orthodox young women who are part of the Adva program that aims to train them with skills for the high-tech sector. (Courtesy)

Is it possible that a High Court ruling could win the praise of both the Haredim and liberals? Such a miracle occurred last week. The deliberations dealt with the question of whether the Haredim, about an eighth of Israel’s population, should be permitted gender-segregated study conditions in academia. The point in question has even broader significance because the ruling outlines proper rules of conduct in the common public space all Israelis share with the Haredim, who function as a powerful “counterculture” in the prevailing Israeli society.

All decent and sensitive people must be pained by the need to choose between two cultural preferences whose motivations are sincere but whose outcomes are contradictory. Should we accede to Haredi appeals for what they call “modesty” and allow gender-segregated study in academia? Or should the liberal voice prevail, which reveres equality – a value undermined by gender segregation – because “separate is not equal”?

The justices were divided in a way that reflects the depth of the dilemma. The majority opinion states that not all gender segregation is prohibited discrimination. Gender equality should be preserved as a key characteristic of the Israeli public sphere, but it is not an absolute value. It must be balanced with other important values, and sometimes, sparingly, the latter take precedence.

Thus, in the case in question, it was determined that the proper goal of integrating the Haredi population into academia for the purpose of educational and professional advancement justifies a certain “proportionate” violation of equality. Separate classrooms should be allowed, but female lecturers may not be excluded from teaching men. Segregation will only be permitted in classrooms but not across campuses; only in undergraduate studies, not in graduate degree programs; only for those who are “Haredi” in accordance with strict criteria and not those on the margins of Haredi society, and more.

Regardless of the specific details of the balance struck by the High Court, the very preference of balance over end positions is commendable. On the one hand, giving free rein to gender segregation in order to respect all Haredi demands would constitute a danger to women’s equality not just in academia, but in all areas of life. Given the high demographic growth rates of the Haredim, the pressure to segregate would spill into other parts of the public space.

The High Court was right to reject the “free market” rhetoric used in support of non-state-regulated segregation and to set limits on it. On the other hand, making equality the sole criterion of “proper” living ignores the personal and public price that would be imposed upon all members of the “counterculture.” For them, insistence on the liberal interpretation of “equality” excludes them from vocational  education and dooms them to poverty.

Balance is required on several levels. From a utilitarian point of view, unilaterally choosing either equality or segregation would certainly result in the under-utilization of existing human resources – women or Haredi – to the detriment of all. Socially, it would divide us into chronic winners and losers, and in a way that would erode basic solidarity between citizens and undermine national resilience. Morally, the threshold of harm should be lowered in a way that takes into account all involved, not just “my” side. Thus, although segregation harms gender equality, Justice Melcer, writing for the majority, argues that, in the present circumstances, it contributes to “substantive equality” by allowing equal representation of the Haredim in higher education.

A true liberal would have to acknowledge that every person has the right to write his or her life story as he or she wishes. Dictating behavioral criteria from the outside in the name of the common good, as dear to our hearts as it is, requires caution and balance. Women have always had a hard time writing their own life stories. The early twentieth century author Virginia Woolf explored the frustration of an imaginary sister of Shakespeare, who despite having talents similar to her brother’s, could not realize her potential as a writer because at that time she had no “room of her own” in the sense of economic freedom.

Similarly, the court feels the frustration of Rivka, the imaginary sister of a Haredi Torah prodigy, who would not be able to realize herself as a lawyer if she lacks a “room of her own” in academia according to her needs, in the sense of preferring gender-segregated education.

Fundamentalism, whether Haredi or liberal, that makes “all-mine” claims threatens us all. The High Court did well in rejecting the extreme positions of both the Haredim and those who oppose them.