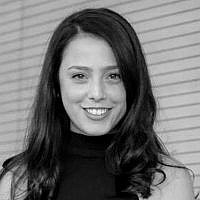 The Blogs
Gal Agmon
Apply for a Blog
Please note that the posts on The Blogs are contributed by third parties. The opinions, facts and any media content in them are presented solely by the authors, and neither The Times of Israel nor its partners assume any responsibility for them. Please contact us in case of abuse. In case of abuse,
Report this post.

The annexation plan, the emergency regulations regarding the coronavirus, the coalition agreement between the Blue-and-White party and the Likud, are all just some of the petitions that have passed by the Supreme Court’s bench this past year. These petitions constitute a very limited portion of the petitions discussed in court throughout the year. However, they have received the most attention from the media, the public and the Knesset members across Israel’s broad political spectrum. Therefore, it is not surprising that the Supreme Court and its judges are facing unprecedented “attacks” lately. At the center of these “attacks” lies the question – is the High Court of Justice too activist? Some argue that the checks and balances system in the state has been violated and in fact, the judiciary “manages” the state. However, it seems to me that in practice, the Supreme Court is restraining itself today more than ever.

The latest governments are working to promote the Override Clause, a legal provision that allows the Knesset to overturn the Supreme Court’s decision when disqualifying laws. But those politicians forget that since the establishment of the Supreme Court in the 1950s to date, a total of only about twenty laws have been repealed. In comparison, in Germany, by the end of 2019 close to 200 federal laws were repealed. So it seems that the Supreme Court doesn’t rush to rule out laws in relation to other democracies in the world. If so, how can one argue that the court is operating in an unauthorized manner? Moreover, why is an Override Clause that limits the scope of the judicial branch’s authority a matter of the Knesset’s authority?

Moreover, the discourse on relations between authorities should not focus solely on the issue of the separation of powers. Parliamentary procedures involve resources. Judicial proceedings require such as well. Hence, legislative procedures that end in nullity are nothing less than a waste of time, manpower and the money of taxpayers. The State of Israel is in a budget deficit that will only increase with the development of the damage caused by the Coronavirus which has not even reached its full extent yet. The last three rounds of elections have not aided our financial situation either. But still, the legislature chooses to deal with its ego battles and power struggle with the judiciary instead of restoring our economy to a more appropriate place.

If the danger posed to our democracy or economy is not sufficient enough, a few days ago a new record was achieved. Justices Uzi Vogelman and Anat Baron received serious threats. The judiciary as a whole and the Supreme Court in particular are not sacred cows. It is permissible to criticize disputed decisions. These same decisions can also be protected. But this must not be done at the expense of our social responsibility for tolerance. We have never been a consensus state, quite the opposite, we are known as a state full of diverse worldviews and dilemmas. Therefore, in the days when schism, division, and hatred are increasing in Israel, the United States, and throughout the world, we must remember that Israel is, first and foremost, an ingathering of the exiled, and that includes differing opinions as well. The image of the High Court of Justice as an unbridled activist is far from true and should be considered when choosing just how to criticize it.

About the Author
Gal grew up in Kiryat Tivon. She studies Law and government at IDC. Where she is on the Dean's list, Gal is the editor of the Law and Business Review, authorizing academic articles in various fields of law for publication. Gal was the head of the marketing department of the IDC Student Union, a member of the “ProWoman” club and she also participated in the Clinic for Social Legislation. She volunteered in the “Heroes for Life” humanitarian delegation to Guatemala and was a mentor in “Derech Hagalim”, a project supporting high school students from low socioeconomic backgrounds. Next year, she will be interning at one of the largest law firms in Israel.
Related Topics
Related Posts
Comments