As they do every year, the High Holidays always lead me to think back to 1974, and the first time I ever attended Rosh Hashanah and Yom Kippur services. I was only 16 years then and taking my first uncertain steps in a new direction in faith.

Although I’m Jewish, I grew up attending the First Baptist Church of Mission, Texas, due to family circumstances, such as my parents’ divorce. I was all-in for the church teachings, but I began to have doubts as a teen. Tracking the fears and attraction of exploring my submerged Jewish identity took up page after page in my journal. I wrote about faith almost as much as I described the teen beauties I slow-danced with at sock hops after those Friday Night Lights football games at the Mission Civic Center. 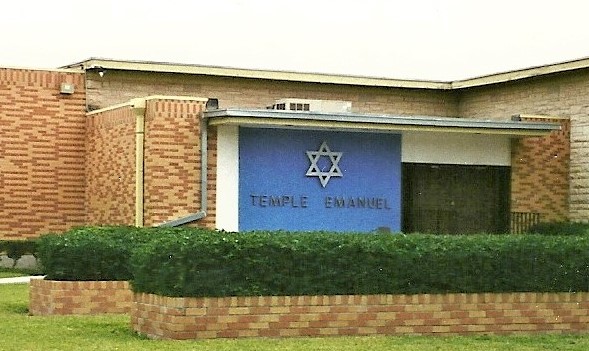 The great inflection point came in September 1974. Here’s a segment from my book, A Kosher Dating Odyssey, One Former Texas Baptist’s Question for a Naughty and Nice Jewish Girl. It records how this point in life, both what I wrote then and my perspective decades later.

On September 14, my mother drove me to Temple Emanuel in McAllen, where I met Rabbi Maynard. I was then 16 years old and didn’t have a driver’s license. I told him generally about my background and my late grandparents who had lived in Mission, but I could not admit I had accepted Christianity. Raw, scabrous guilt over colliding faiths silenced me. I felt like a fraud among the Jews and a backslider among the Baptists (“backsliding” being the term of choice for those who strayed from the Christian path), with nobody to consult about my doubts. Instead, I bore a self-applied mark of Cain. I swallowed my emotions and presented a wildly distorted history. I wrote:

He showed me around the temple after giving me a yamulke, which I kept. He showed me the Torah scrolls and the Ner Tamid (the eternal lamp that hangs above the scrolls). After a tour, he asked me if I had any more questions, if he could be of any more help. I should have told him I had attended church for 10 years, instead of telling him I never got around to coming to the synagogue.

But the drive toward a new path propelled me onward. On September 17, I wrote,

Monday marked another of the icebergs of existence, almost a multi-first. I WENT TO NOT ONLY MY FIRST SYNAGOGUE SERVICE BUT MY FIRST ROSH HASHANAH SERVICE. How’s that for a dramatic announcement?

I pumped up my courage and walked to the entrance. The door was held open, a good sign. Unsure of the next step, I read the memorial plaques until an elderly woman came by. She asked me if I was waiting for anybody.

“No, I’m, ah, visiting. Could you show me the seating arrangement?” We entered the fellowship hall, as the good Baptists would say. I firmly, PROUDLY,  put on the yamulke. It felt quite natural, although as foreign to me in practice as wearing nylons.

[Wearing a yamulke and nylons, what an image. I must have had a Harvey Fierstein vibe going when I wrote that.]

Back home, my mother asked why I had been so secretive about going to the temple.

“Don’t say that, Van. You know I’m interested in everything you do. Can’t you even talk to your own mother? Don’t you trust me?” She started crying.

I had no reply for her. A week later I attended Yom Kippur services.

I was much more relaxed this time. I even struck up a conversation with a woman who was a convert from Catholicism. She seemed to understand my circumstances. She even said, “You must be lonely.”

“You’re so right, lady, so right,” I wrote in my journal.

I stopped going to the First Baptist Church but lacked the strength to start going to temple, although the leader of the youth group called me once, a thoughtful gesture. By 1975 my identity and belief as a Southern Baptist faded away and I started down a wandering and ongoing path of reinvention and return to Judaism.

My mother and I didn’t talk about this. Still, she accepted my new identity. For Hanukkah 1979 she gave me a chai necklace, which only comes off when I get an EKG. I got her a “Yiddishe mame” bag when I visited Israel in 1982. To my eternal regret, she didn’t live long enough to attend my wedding at the Kane Street Synagogue in Brooklyn or meet her Jewish grandson. My wife and I named him Samuel in honor of her first name, Shirley.

Still, I like to think Mom knows all about what I’ve become from her perch in the World to Come, and likes the results.