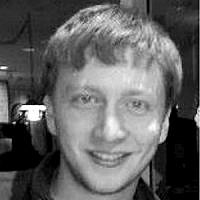 The Blogs
Solomon Tarlin
Apply for a Blog
Advertisement
Please note that the posts on The Blogs are contributed by third parties. The opinions, facts and any media content in them are presented solely by the authors, and neither The Times of Israel nor its partners assume any responsibility for them. Please contact us in case of abuse. In case of abuse,
Report this post.

Over the past few years, J Street U has grown significantly as the political home for pro-Israel, pro-peace Americans. For many young Jewish Americans, J Street provides a setting where Jewish Americans and all Americans can demonstrate their commitment to Israel by ensuring its long-term future as a Jewish homeland and democratic state. J Street’s presence as a pro-Israel group makes it a natural partner for Hillel, which is the organization primarily responsible for Jewish life on college campuses. As a result, Hillel and J Street U’s 60 chapters have become partners on dozens of campuses, with that number always increasing. This partnership on campuses across the country is supported by Hillel International, the umbrella arm of campus Hillels, as was noted when Hillel staff told the New York Times last December that “J Street and J Street U and other groups are more than welcome” in Hillel.

Unfortunately, the respective Hillel and J Street U chapters at Boston University do not currently share the productive partnership that has been cultivated on other campuses across the country. Despite attempts by the J Street U BU Board to form a partnership, the Hillel Student Board rejected J Street U’s proposal to become part of Hillel. With this decision, BU Hillel distinguished itself from other campus Hillels and Hillel International, which have accepted J Street U under the Hillel umbrella. The decision was in direct contradiction with what Sheila Katz, Vice President for Social Entrepreneurship of Hillel International, said at the National J Street U Student Town Hall last week in Baltimore. In Baltimore, Katz declared that there is no question that J Street U is in the Hillel tent. As J Street U continues strengthening its relationship with Hillel, the decision made by BU Hillel remains the elephant in the room. BU is home to thousands of Jewish students and one of the largest Hillels in the country. Our community is understandably concerned about the relationship of young Jews to the Jewish community, especially young progressives. We cannot lament that many young Jews feel disconnected from our community while simultaneously casting their work around Israel and relationships with our homeland out of the communal tent and the BU Hillel building.

In their message to J Street U, BU Hillel wrote, “The reason this decision was made is because we would like to keep Hillel a politics-free community.” This explanation is inconsistent with BU Hillel’s mission statement, which affirms Hillel’s commitment to providing a space for pro-Israel politics. First, it states, “Through innovative programming, Hillel promotes social, cultural, political, and religious interaction among all students”; later, it declares, “We represent the University’s Jewish students in a pro-Israel manner with social, cultural, and political programs and events.”

Further, one of the group descriptions listed on the Israel page of BU Hillel says that “Boston University Students for Israel (BUSI) is a student organization dedicated to representing Israeli culture and politics on campus.” Nothing we do is free of politics, nor should it be. Music, art, government, cultural practices, even religious observances all have political components. This begs the question: does BU Hillel want to keep Hillel “politics-free” or free of politics they disagree with?

BU Hillel’s decision contradicts Hillel’s basic values of building vibrant Jewish life and support for Israel. It is critical that students understand the politics of the region in order to address the existential threats to Israel’s future and to ensure that our communities address those threats. We implore Hillel to stand up for its mission and provide space for all Jewish students to engage with Israel, the conflict which imperils Israel’s future, and the occupation which causes tremendous suffering by the Palestinian people, so that students can create their own relationship with Israel and develop their own strategies for acting towards a better future.

This decision keeps progressive pro-Israel voices out of the conversation and hinders meaningful dialogue. J Street represents the opinions of a sizable portion of American society and the Jewish community, including many members of Hillel. Within Hillel’s Student Board, many members worked hard to get J Street U’s proposal accepted. Many students and young Jews are so disenchanted by the polarizing rhetoric in regards to Israel that they give up engaging in the region and in the Arab-Israeli conflict entirely. But that is the critical work we do at J Street U, while opening up the conversation about Israel on campus. And this allows more people to engage meaningfully and act strategically for a better future for Israel, the Israeli-Arab conflict, and the future state of Palestine.

In Jewish tradition we are taught that meaningful, respectful discourse in response to disagreements yields wisdom that cannot be obtained elsewhere. It was in this spirit that the Hillel’s namesake, Rabbi Hillel, spent countless hours debating Jewish law and holy texts. Intellectual honesty requires that we constantly rethink our worldview, and find new angles from which to see the world. Allowing J Street U to offer its perspective on Israel will provide the opportunity for BU students to think critically about the meaning of Israel and the future state of Palestine to them, strengthening the struggle for peace and security in the region.

BU Hillel has built a vibrant Jewish community at the university, and its members know the positive effect Hillel has on their Jewish identity. It is time for BU Hillel to allow J Street U into the fold, so that all Jews can figure out what Israel means to them and so that J Street’s many Jewish members can be a part of the campus Jewish community.

About the Author
Solomon Tarlin is a student at Boston University studying Economics/Mathematics. He grew up in Sharon, MA. He serves as Vice President of the Boston University chapter of J Street U, which seeks to promote open dialogue on campus and provide a home for pro-Israel, pro-peace students.
Comments