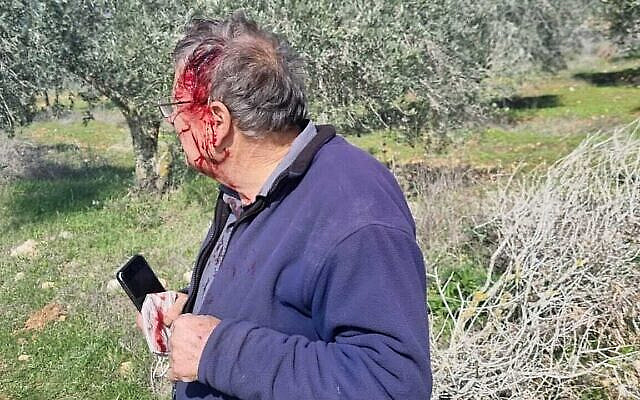 Israeli Peace activist injured by settlers in the West Bank in Gaza. This photo appeared in The Times of Israel on January 21, 2022, courtesy of Yesh Din

A sojourner, you are not to oppress: you yourselves know the feelings of the sojourner, for sojourners were you in the land of Egypt ( Exodus 23:9 translation by Everett Fox)

For the past several months (if not years!), the so-called “Hilltop Youth Settlers”, who live in settlements which are mostly illegal outposts that the governments of Israel should have dismantled by law a long time ago, have been on a consistent rampage against innocent Palestinians and social justice ethically-minded Jews who are helping them in the West Bank. This is a completely outrageous and immoral phenomenon, which must be brought to halt by law enforcement authorities in Israel right away.

What has been going on? Who are these hilltop youth settlers? And why must it be stopped?

They are radical Jewish youth in their teens or early twenties and thirties who were raised in ultra-Orthodox or ultra-nationalist educational settings and communities, who have settled in many illegal outposts throughout the West Bank. Many of them are disaffected, marginalized, psychologically troubled young people. Many of them are followers of the racist, ultra-nationalist movement known as Kahanism which has morphed into “Jewish Power”, the political party led by MK Itamar Ben Gvir and “Religious Zionism” led by another extreme right-wing MK Betzallel Smotrich (actually “Jewish Power” is part of “Religious Zionism).

These extreme right-wing parties attract these disaffected youth, support them financially, legally and “religiously”. There are hundreds, if not thousands of them, all over the West Bank, including East Jerusalem. By their constant attacks on Palestinians, Jewish peace activists, the police and the army, it is widely understood here in Israel that they pose a clear and present danger to Israeli society as a whole and to security in the West Bank. Because they are a security threat, it is most likely that our Security Services know who they are, where they live, what they eat for breakfast, and what additional terrorist activities they are planning. Supposedly they are being watched all the time. One wonders what the government is waiting for, when will they stop watching and start acting.

According to Dr. Gadi Gvaryahu, the chairperson of the Tag Meir (Light Tag) Forum, a coalition of more than 50 organizations which combats racism, injustice and hate crimes all over Israel and the West Bank, this phenomenon has clearly gotten out of hand:

Jewish terror against innocent Palestinians, human rights activists, police officers and Israeli soldiers has been going on, without interruption for a long time, inside Israel and in the West Bank. This dangerous phenomenon has been occurring on a daily basis for more than ten years.

Indeed, this has become part of the new normal in daily life in the West Bank. It has become just another accepted practice in the life of those people who live under occupation in the West Bank during the past 54 years. Yet, it appears to be getting worse, and more out of hand, from month to month, from day to day.

While there have been many condemnations of these acts by many politicians, writers, journalists and others in Israel over the last few months, Diaspora Jews have largely been silent on this issue. But a week ago — after an Israeli Reform rabbi and other peace activists were badly injured while they were trying to help out Palestinians in the West Bank village of Burin — seven American Jewish pro-Israel organizations finally spoke out. In a letter of January 25, 2022, addressed to Prime Minister Naftali Bennett, Foreign Minister Yair Lapid and Defense Minister Beni Gantz, they expressed their view that the attacks by extremists on Palestinians and Israeli peace activists on Friday, January 21st, outside of the village of Burin near Nablus were “particularly egregious, though not isolated.” In their letter they wrote:

This disturbing trend must be addressed through unequivocal action by the Israeli government and security apparatus… these attacks by Israelis are an affront to Israel’s rule of law, to Israeli democracy, and to Jewish values, while undermining Israel’s image and relations with the United States government, American people, and American Jewry.

This letter was signed by the Anti-Defamation League, the Central Conference of American Rabbis (Reform/Liberal/Progressive), the Israeli Policy Forum, the National Council of Jewish Women, The Rabbinical Assembly (Conservative), the Union for Reform Judaism, and the United Synagogue of Conservative Judaism.

While this letter is commendable, it is not enough. Instead, a systematic campaign must be conducted by these and other groups—in cooperation with relevant organizations in Israel—to compel the government of Israel to take serious and sustained action against these criminals.

These hilltop youth settlers have been acting illegally and immorally — with winks of tacit approval of their actions — from the police, the army and the government, for too long. Unfortunately, very few arrests have been made or indictments drafted, so they know that they are above the law and can continue to beat up peace activists and Palestinian farmers on an almost daily basis without the risk of arrest or punishment.

The leaders of the current government of Israel have so far only given lip service to their responsibility to act in this matter. But lip service is not enough. Action is needed. Arrests must be made, indictments must be drafted, and the police and the IDF must be instructed not to allow these actions to continue! In other words, actual enforcement of the laws must occur!

Why is this so complicated when it ought to be so simple? Aren’t illegal outposts against the law? If not, what does the word “illegal” mean? Didn’t the governments of Israel declare them “illegal”?

Why do the police and the army all too often simply stand idly by while these young Jewish terrorists run rampant? Why have they allowed so many incidents to happen for so long?

The answer, of course, has to do with right-wing politics in Israel. The right-wing “nationalist” Prime Minister—and several of the right-wing political parties in the government—don’t want to rock their shaky boat, for fear that it (and they) might drown. The don’t want to offend the settlers. So, they are frozen and not doing anything about it. As in the recent film “Don’t Look Up”, they are assessing the situation!

However, this kind of inaction is untenable. It is simply wrong. It is both illegal and unethical. It is not the kind of behavior that we Jews –in Israel and in the Diaspora—can countenance any more if we still seek to maintain a Jewish and democratic state.

These acts of violence by radical settler youth—followers of Meir Kahane and Itamar Ben Gvir, his successor, who is now in the Knesset under the false name of “Religious Zionism” (this form of Zionism is actually irreligious, if not blasphemous)—are not only causing havoc in the West Bank but in many parts of East Jerusalem. They are in cahoots with the radical right groups which promote evictions of innocent Palestinians from their homes and which support home demolitions which destroy Palestinian lives.

In addition, they are guilty of terrible vandalism on Christian churches in Jerusalem. This has caused the leaders of the Christian churches to issue an emergency statement last December (around Christmas), which called on the Israel government to reign in these violent radical groups, to no avail, except to get a nasty statement from Israel’s Foreign Ministry, which argued falsely that they exaggerated and that everything is just fine! In fact, the Christian community in Jerusalem has been suffering from violence, vandalism and spitting for many years by Jewish radicals, and very little has been done about it, which is why Christian leaders are justly furious.

Enough is enough, already. Condemnations that are just lip service or simply media spin will no longer suffice. The government of Israel—and its security forces—must change their policy on this issue right away, even if it is not politically expedient, domestically. It is the right thing to do. It is also diplomatically prudent, for Israel’s image in the world. And it is certainly an ethical imperative.