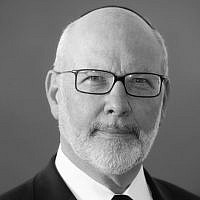 Fortunate is a man who sees Hashem as his security (Psalms 40).

You are a renowned consultant and financial manager. A threatened boss has you arrested, tried and imprisoned on a serious trumped-up charge. Your legal remedies are exhausted. You feel hopeless. From the depths of your dark cell and anguished heart you cry out to Hashem in prayer.

The Chief Catering Officer of the presidential palace is also in prison. Shortly after your prayers, he consults with you and is impressed by your wisdom. He later receives a presidential apology and is released, which is precisely what you told him would happen. Clearly, his acquaintance with you and his release are the signs of hashgacha (Hashem’s intervention). He answered your prayers. You would be remiss in not optimizing this miraculous event with just a little hishtadlut (personal effort). You ask the Chief Catering Officer to put in a good word for you when he has the opportunity.

What is wrong with this story? Nothing. It’s a true story that happened to Yoseif. The astonishing thing is that instead of being commended for his effort, Hashem punishes Yoseif with an extra two years of imprisonment. This consequence is  highlighted in the opening phrase of our Parsha and its very name, Mikeitz (and it was after two additional years…).

When are we meant to pick up the cue of Hashgacha and act on it, and when not? What are the guidelines of Hishtadlut (personal effort) versus Bitachon (trust in Hashem)?

In Tehillim (Psalms) 40 it says: “Fortunate is a man who sees Hashem as his security,” this statement refers to Yosief (who was a man of outstanding trust and faith in G-d). The verse in Tehillim continues however with a caveat “and has not turned to powerful people whose arrogance surpasses their power[1]”. This too refers to Yoseif who, because he twice asked the butler to remember him to Pharoh, had two years added to his imprisonment.

Three observations in this Midrash provide clues as to why the Midrash does not consider Yoseif’s requests of the butler, as legitimate hishtadlut.

1. Even though Yoseif is criticized for asking the butler for help, it was after all the butler who told Pharoh about Yoseif. Yoseif’s hishtadlut did ultimately deliver results. What then was wrong with his request?

2.The fact that he asked to be remembered twice, not once. Does this suggest that had he only asked once, his hishtadlut would have been rewarded.

3.The person he turned to, the butler, was a powerful person “whose arrogance surpassed his power.” Does this men that if Yoseif would have turned to a more humble person or to one who was truly powerful (such as the king himself), again, Yoseif’s hishtadlut might have been rewarded with success?

It is true that the butler was ultimately the vehicle to Yoseif’s freedom. The meeting between the two men was not coincidental, it was absolute hashgacha. In this analysis, Yoseif was correct – (Observation 1). Tzadikkim experience no random coincidences in life, or, as the Chazon Ish[2] defines Emunah (faith) as the belief that nothing in the world is coincidental. The question is whether it was sufficient for Yoseif to observe this hashgacha gratefully and wait for it to play out, or whether the Torah expects us to partner Hashem in His miracles by doing something active to encourage their outcome?

Generally we are expected to do something active. The reaso is so that G-d’s intervention never be experienced as an unquestionable reality. If it were such a reality, people would be deprived of the free choice to believe in G-d or not to. Faith is the capacity to know truth even when it cannot be proved. Unambiguous miracle makes belief in G-d a science, not an act of faith. This is why miracle is almost always accompanied by an event or human action that could explain the miracle rationally as an alternative to faith.

So, we are expected to do something active when Hashem intervenes, however, this depends on the intention of the person acting. If, when a miraculous intervention occurs, we do something active that could reasonably be interpreted as the cause of the outcome, then our action is legitimate hishtadlut and does not undermine our faith. If we act in ways that could not be seen as responsible for the outcome, or we do things in excess of what is needed to achieve the outcome, then we are acting out of desperation rather than out of faith. Desperate actions are not legitimate expressions of hishtadlut and are not aligned with bitachon (trust in G-d). Hishtadlut means that we invest in the potential of a desired result in the future. When we are desperate, we don’t invest; we gamble!

There are two indications in the Midrash that Yoseif acted with a touch of desperation thereby converting his efforts (in his own mind at least) from an investment in his freedom, to a gamble on the generosity of a politician. The first indication is that he asked the butler to remember him twice, not once – (Observation 2). Once might have been seen as a valid investment in freedom. What does Yoseif gain by repeating the request a second time in the same sentence as the first time? To do something additional that adds no value to an investment is an act of desperation. Yoseif seems to be acting as if it were a gamble and tries to increase his odds by repeating the request a second time. Hishtadlut is not a gamble, it is an investment. You can increase your odds by buying two lottery tickets, you do not increase your odds nor reduce your risk by doubling your investment in the same instrument! Yoseif ‘bought two lottery tickets,’ but hishtadlut is not a lottery.

There is second indication that Yoseif felt a measure of desperation unbecoming to a tzaddik of his stature: The person he turned to was a politician with an inflated sense of importance and power (after all, he worked in the palace bar – he did not serve on the President’s cabinet), driven by only one value: personal expedience – (Observation 3). As such the butler would remember Yoseif to Pharoh only if and when it promoted his own (the butler’s) interests. He would do so whether or not Yoseif asked him to. If no opportunity presented itself to further his own interests, he wouldn’t mention Yoseif no matter how many times Yosief asked him to do so. So Yoseif’s requests to the butler were in vain. They were not a wise investment, they were unnecessary acts of desperation and as such they undermined his greatness in the characteristic of bitachon in which he otherwise so excelled[3].

אין עם הארץ חסיד – “a person who lacks sophisticated Halachik knowledge, cannot be truly pious.” One can observe day-to-day acts of hashgacha using ones own intuition and feelings. However, to interpret these acts and to determine whether and how to respond to them requires deep halachik insight as well. Even Yoseif erred in this exercise of halachik judgement.

Hashem cares about every individual, monitors each of them and intervenes in their lives constantly. We don’t always notice when He does. If you start a practice of reviewing each day every evening and writing down in a journal anything “coincidental” that happened, you will be stunned as you discover the patterns in these “coincidences”. Some offer opportunities for action, some are merely there to be gratefully noticed. In any event, whenever you act out of hishtadlut – personal effort to bring about a desired outcome – do so in the secure knowledge that you have a partner in whom you can trust. Act not in a way of desperation and pessimism but as a way of investing in the outcome you desire and believe, G-d willing, you will accomplish. Fortunate is the man who sees Hashem as his security and does not rely on powerful people whose arrogance surpasses their power.

[3] I was inspired in this interpretation of the Midrash and the conditions of hishtadlut by insights of the Beis Haleivi – Rabbi Yosef Dov Soloveitchik (1820-1892), and the Chazon Ish ibid.

About the Author
David Lapin, Rav of KBA, Raanana, author, speaker, and founder of Lapin International, a leadership and strategy consultancy, is dedicated to transforming leaders and restoring dignity and sanctity into the workplace. His life changing ideas and solutions to complex life issues move people into new paradigms of thought and action. He lives in Raanana, Israel, with his wife, has five children and fifteen grand-children. He is the author of Lead By Greatness, CEO of Lapin International, Inc. and teaches Torah on www.RabbiLapin.com
Related Topics
Related Posts
Comments