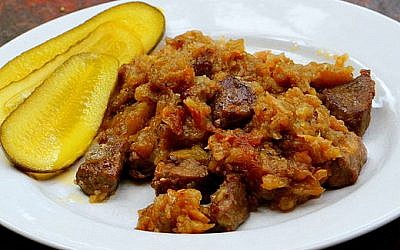 One of the most, if not the most, Jewishly associated foods, is Cholent. In many Jewish homes every Shabbat lunch is associated with cholent, while others are sure to have it from time to time. Fascinatingly, cholent is the only food, other than matzah and mandated foods, that is strongly grounded in Jewish text and law.

Scholars debate the etymology and meaning of the word “cholent”. While some associate it with the Hebrew word “she’lan” which means has slept overnight, or translate its old French meaning from “Chaud” meaning hot and “lent” meaning slow, most agree with Yiddish linguist Max Weinreich that the word cholent comes from the French “Chalant” meaning hot(as you would describe someone cool as non-chalant).

Scholars agree the food originated in France some 800(!) years ago, traveling from France to Germany and other large Jewish communities so much so that the dish is mentioned in the writings of Rabbi Isaac of Vienna (the Ohr Zarua) who lived in Vienna in the 1200s. The rational for this food, however, is far more ancient.

The Torah says “lo te’va’aru esh bechol moshvoteichem beyom hashabat—you shalt not kindle any flame in all of your dwellings on Shabbat. This verse was a matter of great debate between those who followed rabbinic Judaism and the Torah sh’be’al peh accepting the oral Torah, and the Sadducees and the Karaites who only accepted the written Torah.

While we interpret this verse as saying do not kindle a new flame in your home on Shabbat, Sadducees interpreted it as saying there should be no flame in your home on Shabbat. Thanks to this the real tzdukim didn’t have any light or candles in their home on Shabbat. They ate cold food and sat in the dark following this very pasuk. Those who followed rabbinic Judaism and the oral Torah believe that the verse is coming to exclude the option of infighting a new fire, not to exclude the option of having any fire lit in our homes on Shabbat.

Thus, having a lit fire in one’s home on Shabbat became a symbol of belief in the oral Torah and the Jewish traditions.

Interestingly, this is why saying the second chapter of the Mishna in tractate Shabbat, called Bameh Madlikin, became a tradition among the Jewish people. Making sure we show our belief in the permissibility—even obligation—to have lit candles at one’s home on Shabbat became the hallmark of following the Torah She’bal peh.

And like in many other cases, we Jews, came to express our faith in a culinary way as well. Showing our belief in the permissibility of pre-lit fires on Shabbat came to be expressed in eating a hot dish on Shabbat day. After all, eating hot food on Friday night did not show any specific belief. You could be a Karaite or a seducee and still have warm food Friday night, so long as it was heated before Shabbat. Eating warm food on Shabbat day meant something. It was a religious statement. So much so that there were real cases in the middle ages of communities that decided to excommunicate those who did not eat something warm Shabbat morning accusing them of being Karaites.

So much so that Rabbi Zrachia Halevi, who lived in Spain in the 1100s writes “he who does not eat warm food (on Shabbos) should be checked out to see if he is not a Min (a heretic)”

This is how a food emerged that needed to be hot on Shabbat day, but prepared before Shabbat.

To add spice to the halachic manifestations of this food comes the rabbinic halacha called She’hiya. What this means is that foods cannot be placed raw on the fire right before Shabbat, left to be fully cooked on Shabbat. Rather the food needs to be at list half cooked by the time sunset comes. This halacha too contributed to the history of cholent. There was a need for a food that, despite being pretty cooked by the time sunset came around, would still be able to be on the fire until Saturday midday.

Cholent in Ashkenazi countries and Chamin in Sephardic countries emerged as food with beans, later potatoes, beans and varying ingredients that can last on a low fire for many hours.

So important was this that some of you must have heard the stories from the Lower East Side or even Warsaw and other large Jewish communities where everyone would like their pots in the baker’s oven and come get it on Shabbat morning.

So how did this week’s verse “You Shalt not ignite a fire in your dwellings on the day of Shabbat” take such a central role in Judaism?

This is especially difficult to understand since the verse seems so odd and striking. Of all things that one can’t do on Shabbat, why is lighting a fire the one that is mentioned?

A reason, given for the unique place fire takes in Judaism, can be interestingly found in Greek mythology. While there is a Midrash about God giving the first fire to Adam Harishon on Motzei Shabbat, Greek mythology takes a very different approach to the matter. Prometheus, a notorious trickster and Titan, steals fire from the Gods and gives it to humans, thereby enabling the advancement of civilization. He is judged harshly and bound to a stone for the rest of his life, doomed to torture and pain.

In Judaism too, fire symbolizes the epitome of means of production, transformation, progress and creation. That is why the Torah says, take one day a week in which you don’t erase all creation, but rather a day in which you reflect on everything that you do and why you are doing it.

Fire, work, and creation — all valued and held dear. But on Shabbat, keep that flame ignited. Don’t extinguish it. We don’t believe there need to be conflict between this world and our values. Just make sure that the flame is working for you, not you for the flame.

About the Author
The writer is an eleventh-generation rabbi, teacher, and author. He has written Sacred Days on the Jewish Holidays, Poupko on the Parsha, and hundreds of articles published in five languages. He is the president of EITAN--The American Israeli Jewish Network
Comments