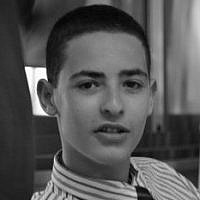 The Blogs
Jonathan Biron
Apply for a Blog
Advertisement
Please note that the posts on The Blogs are contributed by third parties. The opinions, facts and any media content in them are presented solely by the authors, and neither The Times of Israel nor its partners assume any responsibility for them. Please contact us in case of abuse. In case of abuse,
Report this post.

Stones thrown at a Rabbi’s home; Molotov cocktails thrown at synagogues; beating innocent Jews, among them teens and elderly; graffiti on the windows of Jewish businesses; calls for “death to Jews” and “Jews to the gas”. It is all familiar. We’ve been there. And yet history repeats itself again.

When I think of the Holocaust, I think of all children who, in the most shameful period of history, feared for their lives just because they were Jews. It makes me shudder to think that even today, 2014, exactly on the same land, there are children scared to be identified with Jewish symbols because it can risk their lives. The moral obligation that Europe has undertaken by promising “never again” has been shattered in view of the recent terrible scenes and devilish sayings.

The anti Semitism has never vanished off the face of the earth. It just changed its face. From “primitive” pogroms and massacres of Jews, to the gas chambers, to the war against Israel – the purpose has not changed but the means have. The war has become more sophisticated, more subtle. But however sophisticated the campaign is, when the hatred is so fierce, violence is inevitable.

Thus, in such times when Israel fights terror, it is not surprising that anti-Jewish riots and violence cases have sprung up. For the demonstrators and those who wave the anti-Israel flag, there is no distinction between Israelis and Jews. They don’t find it significant that not all Jews are Israelis rather that most Israelis are Jews too.

The nature of recent demonstrations well-illustrates the anti-Israel camp’s character. Those who “passionately condemn any violence” have used violence themselves. Those who talk about blockade –besieged a synagogue themselves. Obviously, those who demonstrate against the “prime violator of human rights” have forgotten to do the same against Syria and ISIS, where genocides are really carried out; where hundreds of thousands of people have been murdered. They have intentionally chosen to focus on the only democracy in the Middle East, the one and only nation state of the Jewish people.

There is no moral ground for a camp which turns a blind eye to real cases of human rights violation and massacres as well as carries out and promotes violence itself. They are not FOR someone. They are AGAINST someone. They don’t support people rather they delegitimize a people’s right for self determination.

A year ago, I went on a school expedition to Poland. Almost every 17-year-old Israeli goes on this meaningful journey, in which you get to see the Jewish cemeteries, the ruined and godforsaken synagogues, the ghettos and the concentration camps. Walking on the railroad tracks of Auschwitz, while proudly lifting my country’s flag (the Star of David with the blue and white colors of the Jewish prayer shawl), symbolizes a big change in the history of the Jewish people. From total dependence — to independence.

Indeed the Jewish character has changed; the Jewish people have a country of their own now. Yet Jews, whether in Israel or around the world, still feel they have to fight for their right to walk freely and proudly as Jews. Jew hatred is still very much alive and kicking.

The world should know that ultimately, evil does not distinguish between different people. Groups that are driven by hate will continue to hate. If not Jews, then Gypsies, foreigners, LGBT members, handicapped, blacks and others. We have seen it in the past and we will probably see it in the future.

The writer is an 18-year-old Israeli, a US Department of State International Exchange alumnus and active in peace and public diplomacy programs.

About the Author
Jonathan 'Yoni' Biron is an 18-year-old Israeli, a US Department of State International Exchange alumnus and active in peace and public diplomacy programs.
Comments