The Blogs
Marcus Roberts
Apply for a Blog
Please note that the posts on The Blogs are contributed by third parties. The opinions, facts and any media content in them are presented solely by the authors, and neither The Times of Israel nor its partners assume any responsibility for them. Please contact us in case of abuse. In case of abuse,
Report this post. 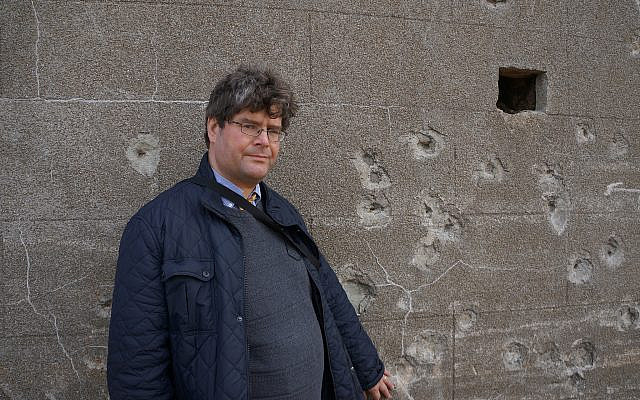 Marcus Roberts standing next to a wall on Alderney believed to be an execution site.

As a Jewish community, while have been focused on the 75th anniversary commemoration at Auschwitz, MP Matthew Offord (to his credit) reminded Parliament that the Holocaust also happened on British territory, as he referred to Holocaust victims and victims of Nazi terror, laying in unmarked graves on the Island of Alderney, in the Channel Islands, but his comments also challenged us as to how we should both remember, respect and preserve the remains of those who died in the Shoah on these islands.

However, I was very disturbed that Offord also used the Holocaust Memorial Day debate in Parliament, to propose disturbing and moving the remains of these Holocaust victims on Alderney, and extracting DNA, contrary to the wishes of many in the Jewish community, not least the Chief Rabbi.  The offence and out-rage caused by these sentiments in the community and outside the community cannot be underestimated, with one rabbi phoning me nearly in tears with the news and requests from Alderney and abroad, asking me to respond to the proposed disturbance and removal of the graves.

Offord’s statements are demonstrably not currently, or correctly informed, in what is in reality a very complex issue.  Offord quotes the recent difficulties that Prof. Study Colls experienced in obtaining permissions to excavate sites on Alderney, not aware that the States of Alderney had previously greatly facilitated her geophysical survey of the sites (and with the agreement of Jewish organisations) and the States had very justifiable reasons to not permit digging for the purposes of a film.

Further, Offord may not be aware that Prof. Study Coll’s formal stated permission is not to dig graves on Alderney, without the permission of the Chief Rabbi and that she understands the religious sensitivities of the sites.  Professor Martin Jones, the Deputy Vice Chancellor of Staffordshire University, wrote to me in the summer, on behalf of Prof. Study Colls stating, ’…We are able to reiterate for the avoidance of any doubt that Prof. Study Colls has already confirmed in public on many occasions and in several countries that she would never excavate any Jewish burial site without the consent of the appropriate authorities, including in particular the Chief Rabbi or Rabbinical authorities in the relevant territory…’

Offord also claims that, ‘I do have a belief that unmarked graves, mass graves, and the cases of bodies hidden by the murderers are not proper graves within themselves.’  He does not appear to be aware that up to 1961, the burial site on Alderney was in fact a designated and formally marked by the Commonwealth War Graves Commission (CWGC) as an official war grave, and had equal status with any other UK maintained war grave site and graves and indeed, most of the graves had a marker and names.  This site, was until it was de-accessioned by the CWGC, ‘a proper resting place’.

He is also absolutely incorrect from the point of view of Jewish Law, as these are sacred sites and graves.  The Chief Rabbi, in making clear his opposition to any digging of the graves stated in his letter this summer, ‘a central tenet of Judaism’s approach to the sanctity of such sites is that they remain unaltered in perpetuity, and therefore we, as a faith, place tremendous significance on maintaining their eternal integrity.’

I wrote to the CWGC a few years ago urging them to re-accession the cemetery as official war graves and extend the boundary, citing my research, that of Prof. Study Colls, and others, that there are still burials on site and that the cemetery extended well beyond its official boundaries.  The CWGC were (surprisingly) not interested, which shocked and surprised me, as this is supposed to be their business?

I cannot think that any reasonable person can maintain that all other war graves are to be protected and respected, but not these?  We would not think of disturbing the war cemeteries in France and there would be out-rage if it was suggested, so why, are these graves somehow different?

I would strongly urge that Offord offer a formal correction of his statement to the House and instead use his Parliamentary platform to urge the re-adoption of the site as an official War Grave, which should then be made central to our own planned National Holocaust Memorial and help ensure the proper preservation of the site and honour to the dead in accordance with Jewish Law and that the remains of SS Lager Sylt on Alderney should be preserved as part of the National Memorial too.  While he has the attention of the house, he should also ask why the UK Government still has its own Holocaust secrets and when the Government will open the remaining Alderney files, which will doubtlessly reveal what the British investigation and excavation of the cemetery yielded, after the German surrender of the Island and whether the government will promote remembering the Holocaust, not only in relation to Auschwitz, but rather closer to home as well?

As a Holocaust researcher and educator, I am troubled that Holocaust commemoration and education has become so focused on Auschwitz and we in this country have forgotten Holocaust events on British territory and that these islands were the site of the westernmost SS concentration camp in Europe?  I am also deeply concerned that the government does not seem to see a deep contradiction between their urging us to remember the Holocaust and their refusal to release official UK Holocaust secrets from the archives?  This can only tend to undermine our own National Holocaust Memorial.  Will the Holocaust Memorial also confront the question as to why the British never tried the 46 suspects they had investigated for war-crimes on Alderney and had recommended for trial and were in their custody at the end of the War?  Remembering may necessitate confronting uncomfortable truths about our own conduct and may have costs.

Finally, there is great concern that Offord’s proposals could unwittingly facilitate the stated desire to expedite the FAB Link project, by the UK government and EU, as the clearance of these graves in the name of respect and science, would finally and directly open the route to the giant UK / France interconnector project and cable, which will bring cheap French nuclear power to this country and save the UK tax payer an alleged £2bn per annum.  FAB Link currently states, ‘the project is scheduled to commence construction in 2020’ and ‘FAB has been recognised as a “Project of Common Interest” by the European Union following support received from both the French and UK governments’. It would be sad if the desire to dig mooted in several quarters, is not about respect for victims of the Holocaust, but about money and Carbon?  I think that we can do better as a nation

About the Author
Marcus Roberts is Director of JTrails, the National UK Jewish Heritage Trail (part of the Jewish Route of Europe, an official Cultural Route of Europe). He is a contributor to the United States Holocaust Museum’s, ‘Camps and Ghettos Encyclopaedia’ and a former free-lance editor to the Library of Holocaust Testimony. Research Associate (Oxford University).
Related Topics
Related Posts
Comments