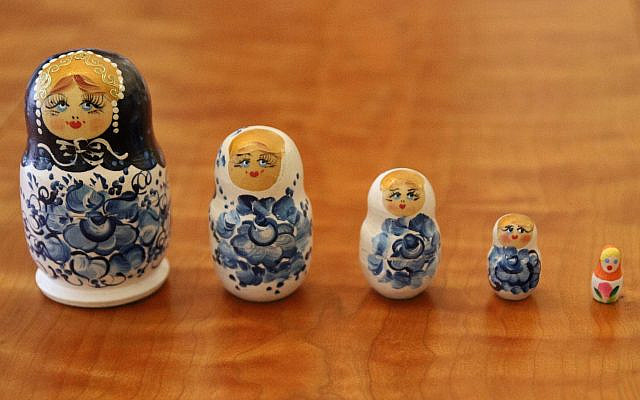 The steps to the Holocaust can be visualized like a Russian nesting doll. The smallest doll is different because the first step, bias, feels different. (Source: the author)

I have met the organizer only once before. I am Facebook friends with her, and the more I watch her feed, the more nervous I get. We all live in a Facebook bubble, and hers is clearly different than mine. “Have you ever noticed the police leave you alone if you aren’t doing anything illegal?” one of her posts asks.

As nervous as they make me, her posts make it clear that she needs to hear what I have to say. But can I talk to her? Do I know what to say that will help her to listen? Can I help her understand how the Holocaust is relevant to her modern times?

In the brief time I have, I need to talk about the path to genocide.

With limited time, I need to get creative. I bring props with me: laminated pictures to pass around and a Russian nesting doll. I begin by passing around pictures of arrests and murder. “This is the Holocaust,” I say. “You have all seen these pictures. The question for tonight is how was this possible? How could a civilized country do such a thing?”

The answer, of course, is that this was possible because the Holocaust did not start with genocide. I bring out the Russian doll and take her apart. As we walk down the Pyramid of Hate[1], visualizing the steps to genocide for the case of the Holocaust, I open the Russian doll to show the next step inside:

Genocide is the endpoint of a long series of steps that make a group of people more and more separate – them vs. us. Each step enables the next, because bad behavior becomes normalized.

Is that where that word come from?

Acts of prejudice are actually the second step of the pyramid, though. The final piece of the nested doll, the baby, is so little you can barely see her. The one I’ve brought is actually from a different set, so she looks different from the rest. This is not by accident. The bottom step of the pyramid feels different. The lowest step of the Pyramid of Hate is bias: jokes, insensitive remarks, and stereotypes.

“This step feels different because it’s not something you do to someone else,” I tell them. “Often these jokes are told within your household. You know they are wrong but you excuse them because that’s just my old uncle and he’s kind of backward. So, you don’t say anything because you don’t want to cause a scene or to upset your mother. Sometimes, the bias is creatively expressed and funny. But if you don’t say anything, then what are your kids hearing? What are you getting used to and no longer thinking deeply about?

“What happens when you tell someone you’ll ‘Jew them down’ and realize too late that you are speaking to a Jew?”[2]

Shock. Flabbergasted faces. “That’s the same word?!?” They ask, thunderstruck. “I had no idea. Oh, my God. Who have I said that word to?”[3]

Their house is burning

They get my point immediately. “What is the one thing I want you to take away from this?” I ask.

“Don’t be racist,” one of the women replies.

“OK,” our host says, “I think I understand. Now, explain Black Lives Matter to me. I post ‘All Lives Matter,’ and I get yelled at. I don’t get it.”

I understand her quandary because in truth, I can see from her Facebook feed that she doesn’t live in a complete bubble. She has other friends like me who have a clearer view of these matters. When she posted “The police leave you alone if you aren’t doing anything illegal,” four different people pointed out the white privilege inherent in that statement. Now, she wants my help to understand.

That analogy makes sense to them. “What should we do?” they ask.

“Listen,” I say. “Listen to the people whose house is on fire and help make the changes they need. Support your politicians when they propose those changes.”

The value of Holocaust education

I think they learned something. They were able to learn because I listened to them, just as I was asking them to listen to others. They were confused. They heard the Black Lives Matter jargon and felt threatened. When I put things in perspective, they understood.

To talk about modern systemic racism, on the other hand, is to directly criticize modern culture. This can make people feel threatened and defensive. Understanding the steps that led to the Holocaust helps us put that criticism into context and pull people back from their defensiveness.

I teach the Holocaust because I know that the lessons of the Holocaust can inform our modern conversation. I know we can use an understanding of the Holocaust to break through the divisive rhetoric and help us all pull our culture off the steps of the Pyramid of Hate.

[1] This concept comes from the ADL: https://www.adl.org/sites/default/files/documents/pyramid-of-hate.pdf

[2] This actually happened to me once. The person who said it, a really nice guy, was horrified when he registered who he was talking to. He apologized profusely. I do not think he will use that word again.

[3] This group was not unusual in failing to have recognized the connection. I’ve heard this same response from a lot of people in Texas.

[4] I did not come up with this analogy. I originally saw it on Facebook, and I do not know its origin.