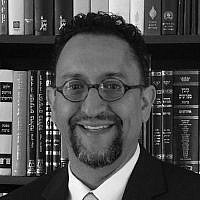 The Blogs
Daniel Bouskila
"Between us and destruction stand our books"
Apply for a Blog
Advertisement
Please note that the posts on The Blogs are contributed by third parties. The opinions, facts and any media content in them are presented solely by the authors, and neither The Times of Israel nor its partners assume any responsibility for them. Please contact us in case of abuse. In case of abuse,
Report this post.

On December 14, 1948, seven months to the day after Israel’s formal Declaration of Independence, the Chief Rabbinate of Israel – under the leadership of Rabbi Benzion Meir Hai Uziel and Rabbi Isaac Halevi Herzog – convened a special meeting and declared Israel’s first ever Holocaust Remembrance Day. While many will immediately think of Yom Hashoah, that more famous day was declared by the Israeli Knesset only in 1951. The Hebrew date that the two Chief Rabbis chose in 1948 was today’s date on the Hebrew calendar – Asarah B’Tevet – The 10th Day of Tevet.

For over 2000 years, the 10th Day of Tevet has been one of the fast days on the Jewish calendar connected to the siege on Jerusalem, which ultimately led to the destruction of the Temple. When searching for a date to mark as a day of mourning and remembrance for the Holocaust, the two Chief Rabbis chose the Fast of the 10th of Tevet, which was the least observed of the four traditional fast days connected to the destruction of Jerusalem (the 3 others being the 17th of Tammuz, the 9th of Av and the Fast of Gedaliah).

Rather than creating a new date on the Jewish calendar, the Chief Rabbis took a long existing fast day connected to a tragedy and decided to infuse it with new meaning.

The name they gave this day was not Yom Hashoah, rather Yom Ha’Kaddish Ha’Klali L’Zekher Korbanot Hashoah – The National Day of Kaddish for the Victims of the Holocaust. In addition to observing a fast day and lighting memorial candles, Jews were encouraged to recite a “collective national Kaddish” in memory of those who perished. Millions were burnt and massacred, their date of death not known, nor do they have a burial place. Many had no family who survived to remember them. Today’s fast day, the 10th of Tevet, would become their symbolic anniversary date of their death (anio/yahrzeit), and memorial prayers and Kaddish would be recited for them by their collective family of survivors – the Jewish people.

Many erroneously question the “Sephardic connection” with the Shoah. While this is not the place to elaborate on the absurdity of that question and the sheer ignorance and lack of sensitivity it represents, let me point out two appropriate “Sephardic connections” as they relate to today’s 10th of Tevet/National Kaddish Day.

Chief Sephardic Rabbi Benzion Uziel, who was active in efforts to try rescuing Jews during the Holocaust, and initiated many special prayer gatherings in solidarity with those suffering or in memory of those murdered, not only helped establish Israel’s first ever Holocaust Remembrance Day, but also composed a special prayer for this “National Day of Kaddish.” It was a lengthy poem, beginning each stanza with the words from a Tisha B’Av Lamentation: Zekhor Hashem Me’ Hayah Lanu – Remember, O God, What Befell Us.

Rabbi Uziel described the rise of Hitler as a man “who rose from the garbage dumps and ruled over Germany, bringing about sin and evil to all of humanity, and specifically to the Jewish people.” In this lamentation, he implored God to “remember the sacred and pure souls of those who perished, bless the remnants who survived and protect them from any further torture by evil perpetrators.”

Rabbi Uziel had a unique sensitivity to the tragedy of the Holocaust, as he served as the Chief Rabbi of Salonika from 1919-1921. This beautiful community that he served with love would ultimately be decimated, as 95% of the Salonika Jewish community were wiped out in the Holocaust. When gathering Jews in prayer or working tirelessly in efforts to save Jews from the Shoah, he most certainly had all Jews in mind, but in his heart, he must have felt the pain of his beloved community from Salonika.

Many years later, in 2008, Rabbi Haim Sabato – a Sephardic rabbi and contemporary bestselling Israeli novelist from Syrian descent – would compose another elegy for Holocaust victims. In his bestselling novel From the Four Winds (Bo’ee Ha’Ruah in Hebrew), a semi-autobiographical novel about a young Egyptian/Sephardic immigrant to Israel who learns about the Holocaust from his Hungarian neighbor in Jerusalem, Rabbi Sabato composed a Kinnah-style poem which has been lifted from his novel and become part of many Holocaust services around Israel, including on the 10th of Tevet. Here are excerpts of his heart rending lyrics:

How was the fate of my brothers decided, Sealed in blood and sealed in mud. A nation rose up to destroy, obliterate them. Like corpses dragged from their homes. Their glory destroyed, their Tefillin ripped and their clothes torn. Their beards shaved, and sidelocks shorn. Stripped of their glory by a stranger. Cutting off the splendor of their family tree. Their cry for help forsaken, their prayer silenced. Shoved in shock into cattle cars, like beasts. With their children bloated from hunger, the cry of their voices which could not pierce the heavens, only tear parents’ hearts. (Translation by Yaakob Dweck)

Today, on this sacred day of remembrance, we fast, we recite memorial prayers, and we read elegies like those composed by Rav Uziel and Rav Sabato.

But we also do one more thing. We do that which the character Saul sought to do for one little boy in the film Son of Saul. We do that which Holocaust survivor Solomon Tauber requested at the end of his diary in the novel (and later the film) The Odessa File: “…will someone please say Kaddish for me?”

Today, on this 10th of Tevet, as the collective family of the 6 million martyrs of the Shoah, we are all mourners. As individuals and as a community, we pronounce those sacred and timeless words, Yitgadal V’Yitkadash Shmeh Rabbah…

About the Author
Rabbi Daniel Bouskila’s interests include the halakhic and philosophical writings of 20th Century Sephardic Rabbis (especially Rabbi Uziel), the literature of Nobel Prize winner SY Agnon and Haim Sabato, and various themes in Hebrew literature and Jewish thought. He is the Director of the Sephardic Educational Center (headquartered in the Old City of Jerusalem) and the rabbi of the Westwood Village Synagogue in Los Angeles, and he splits his time between L.A. and Jerusalem. He writes a weekly blog focusing on Sephardic Torah commentators https://sephardictorahweekly.blogspot.com and a monthly column in the Jewish Journal on S.Y. Agnon https://jewishjournal.com/commentary/opinion/342881/a-tale-of-two-menorahs-agnon-rekindles-the-hanukkah-lights/ He's thrilled to be a part of the "Times of Israel Family." https://jewishjournal.com/author/rabbibouskila/ www.sephardiceducationalcenter.org | www.westwoodvillagesynagogue.org
Related Topics
Related Posts
Comments