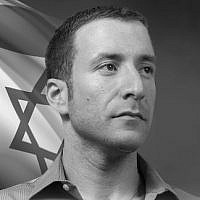 The Blogs
Itzik Shmuli
Apply for a Blog
Advertisement
Please note that the posts on The Blogs are contributed by third parties. The opinions, facts and any media content in them are presented solely by the authors, and neither The Times of Israel nor its partners assume any responsibility for them. Please contact us in case of abuse. In case of abuse,
Report this post.

Seventy seven years have passed since the Nazi regime collapsed and the darkest chapter in the history of our people and humanity as a whole was concluded. Beyond the horrifying scale of the murder, the systematic pursuit of the attempt to wipe an entire people off the face of the earth is staggering and discomforting. Even the Hebrew language, rich and ancient as it is, is unable to find the words to answer questions that human consciousness cannot fathom: How could human beings inflict such mortal destruction, from where flowed the murderous fervor to burn living human beings, throw innocent babies and children into the tides of death and wrathful rivers, slaughter entire communities that dissipated in blood without reluctance or mercy?

Today we stand with the survivors, acknowledge the suffering, fear and loss they have witnessed, and reaffirm our commitment every year: Never again. It is our duty to remember and face heinous attempts by individuals as well as governments to obscure, deny and drown out the days of darkness that descended upon our people in the gaping hole of history. The evil trains have ceased, but the horror still reverberates within us and we cannot be unconcerned. When many of the survivors are leaving us, it is our moral duty to continue to pass the torch of remembrance onwards and prepare for the day when we will stand alone, and dangerous “relative truth” will also invade a field that has so far been considered, almost entirely, sacred.

As the late Elie Wiesel immortally said, “Indifference is more dangerous than anger and hatred. We must take sides. Neutrality helps the oppressor, never the victim.” We have no need for vengeance and the Holocaust must not be a barrier to trust in fellow man, but in view of the gloomy past we must, as the late President Peres also taught us, look forward and build a better shared future, strive to reform world order even when terror and injustice are far from view – reach out and shed a tear for the pain of others. And it appears that these days, when human destruction and war crimes are widespread in the heart of Europe, this imperative becomes more significant than ever.

On this day we bow our heads in silence in memory of those who perished. I know this does not dull the pain, but despite the excruciating flashes of remembrance, I hope you will be able to look up to the flag with pride, a sign of the people’s revival and sovereignty: From dust and ash to a strong, successful and secure state that is home and protector for the entire Jewish people, and the moral and perpetual answer to the attempt to wipe us off the face of the earth.

But today we must also look into our home and internalize that lonely and poor Holocaust survivors are a disgrace in the reality of our lives, and act vigorously to erase this shame. Indeed, greater efforts have been made in recent years, and I am happy for the privilege I have had to lead at least some of them, but the sand in the hourglass is dwindling and the possibility of reform, if only slightly, is fading with it slowly. My hope is that all of us – the government and Knesset, civil society and philanthropy – will understand the magnitude of the hour and act so that every Holocaust survivor receives the recognition, support and care he needs to live with dignity and welfare. I am proud to lead today the activities of the Jewish Federation of New York in Israel, which has been providing for decades thanks to amazing and dedicated partners such as ‘Aviv for Holocaust Survivors’ and others, a lifeline all over the globe – in America, Europe, Israel, the former Soviet Union and more for survivors facing challenges that are difficult to bear alone. I pledge that we will continue to do so with determination and vigor, out of a deep moral commitment.

These remarks were made at a rally of the ‘Aviv for Holocaust Survivors’ NGO.

About the Author
Itzik Shmuli is director general of the Jewish Federation of New York in Israel, and former Minister of Labor and Social Affairs. He was a member of the Israeli Knesset from 2012-2021. He was also a leader in the 2011 social justice movement.
Related Topics
Related Posts
Comments