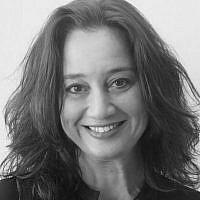 The Blogs
Tammy Hoffman
Apply for a Blog
Advertisement
Please note that the posts on The Blogs are contributed by third parties. The opinions, facts and any media content in them are presented solely by the authors, and neither The Times of Israel nor its partners assume any responsibility for them. Please contact us in case of abuse. In case of abuse,
Report this post.

In March 1988, the late Prof. Yehuda Elkana published an opinion piece entitled, “The Need to Forget.” Elkana, who survived Auschwitz, wrote in praise of forgetting as part of his criticism of the way Israeli society had shaped its collective Holocaust memory and turned the Holocaust into a key component of Israeli identity. He wrote that “Without ignoring the historic importance of collective memory, an atmosphere in which an entire nation both determines its attitude to the present and shapes its future by emphasizing the lessons of the past, is fraught with peril for the future of that society, if it wants to live in relative tranquility and relative security, like all other peoples.”

Elkana came out forcefully against the use of the Holocaust as the prism through which Israeli society measured its present-day values and actions. The article spurred many responses, most of them livid with condemnation, anger, and censure of what was perceived by many as a violation and head-on attack on our remembrance of the Holocaust.

More than 30 years after the article was published, Israeli society indeed seems to have adopted the principle of forgetting – but not in the way Elkana intended. He advocated for the nation’s leaders “to take their stand on the side of life, to dedicate themselves to creating our future, and not to be preoccupied from morning to night, with symbols, ceremonies, and lessons of the Holocaust.” But Israeli society has opted for a different kind of forgetting, one that sets aside the principles that, after the experience of the Holocaust, should have been internalized by all humankind.

In history classes, we teach students that the entire world stood by and averted its gaze from the atrocities; in our national ceremonies, in our schools, in student delegations to Poland, and at memorial evenings we scream out, “Never again!” An entire repertoire of poems, ceremonies, and texts has been deeply embedded in the Israeli mindset, all of them reiterating the key lesson that we will do everything in our power to prevent a second Holocaust.

Needless to say, this is an important lesson – we must do everything we can to ensure that there will never be another Holocaust; not just against the Jews, but against all human beings. However, in the present-day Israeli discourse, this universal message has been shunted aside. Ignoring the meaning of the Holocaust for all humankind undermines the most important message that those horrific years taught us. Yes, human beings can do terrible things to other human beings, horrors that cannot be described in words. The current focus on questions of what may and may not be compared to it, and what may and may not be said with regard to the Holocaust and its lessons, and the calls to censor any slightly divergent interpretation of Holocaust memory have produced a limited and regimented mode of public discourse that the education system, politicians, and media all fall in line with.

The Israeli discourse on Holocaust remembrance is shallow and far removed from any profound and complex study of the critical significance of its Jewish, as well as of its universal, lessons. The fact that we do not deal with them sufficiently, does not erase their implications. This is painfully obvious in the public debate with regard to taking in refugees from Ukraine: who should be admitted to Israel, who not, and why not. The speed with which this war has dropped off the headlines, points to another lesson of the Holocaust years. For all people, the human capacity to deal with the suffering of other human beings is dulled and eroded with time, making it easy to look the other way and continue to focus on domestic matters.

History teaches us that there is a price to be paid for this – and in this sense, we have already forgotten. It is this growing apathy that poses the greatest threat of all to Israeli society. Looking the other way and ignoring human distress, wherever it exists, undermines the lessons of history. Holocaust Remembrance Day is an opportunity to think about the way we educate the next generation and ask ourselves, once and for all, what is the goal of the ceremonies, the trips to Poland, and making the Holocaust a central pillar of the Israeli national identity, and at the same time, to instill a universal perspective on its lessons.

Back to Elkana: “Relying on the lessons of the past in order to build the future, exploiting past suffering as a political argument – these mean involving the dead in the political life of the living.” Thirty years after these words were written, and 77 years after the end of the Second World War, the time has come to listen closely to them.

About the Author
Dr. Tammy Hoffman is the Director of the Education Policy Program at the Israel Democracy Institute (IDI), a lecturer at the Kibbutzim College of Education, and a researcher on the subject of teaching the Holocaust.
Related Topics
Related Posts
Comments