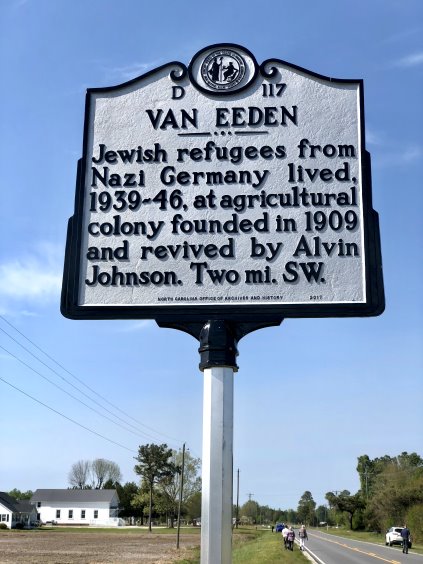 I had never heard of Van Eeden.  Few people ever had.  If they had, they thought it was a place related to the Garden of Eden.  For the lives that were saved there, it was.

October 2016, I dedicated Marker #1 of the North Dakota Historic Highway marker system to a Jew, Herman Stern.  He was known as the Oskar Schindler of North Dakota.  Stern owned a few men’s retailing stores based out of Valley City, N.D., high up in what modern elitists call “flyover” country.  He was neither rich nor very religious.  Yet, when he was given a choice, he chose.  Herman Stern saved over 125 Jewish lives as the darkness of the Holocaust embraced the Jews of Europe.

His own family in Germany desperately reached out to him for help to escape. He did for his own as we would have hoped any family would do for its own.  Then he began helping strangers, desperate Jewish human beings, terrified, terrorized, isolated. He could have said “enough”. He did not. He chose when the knock came at his door.

Stern, with help from one America’s biggest isolationists, Senator Gerald Nye, pulled 125 souls from death to life in America.  They fought the anti-Semitic U.S. State Department policies designed to keep Jews out.  Stern fought and won.  But, he knew there were so many, many more.

Stern, from his vantage point of the upper Great Plains, knew that many small farms had been repossessed by the big insurance companies.  He knew that the State Department blinked at its restrictive immigration rules, even for Jews, if they were coming to America as farmers.  The problem was simple and expensive.

Stern, with fierce energy for a small man burning with a mission, identified lands in the Red River Valley area of North Dakota; lands that were once fertile farms that could be reclaimed for Jewish refugee settlers.  His problem was equally simple.  He did not have the money to undertake his objective of bringing in at least 100 families.

Stern reached out to Rabbi Stephen Wise of the American Jewish Congress with his plan to thwart the State Department and save Jews.  The rabbi responded once to his letters and never again.

Stern had discovered a loophole in American immigration policy to save Jews.  The Jewish establishment was not interested.

I wondered about other unknown, or unrecognized efforts to save Jews.  Tragically, I also learned of opportunities to save Jews, only the Jews lacked the will to save unrelated strangers. Immensely wealthy and influential Jews, such as Lessing Rosenwald of the Sears and Roebuck fortune, saved over 300 members of his own family.  When his daughter asked him about it.  He explained, by asking her a question.  “What is the difference between a second cousin and a second cousin once removed?”

The child was perplexed.  Rosenwald answered, “life or death.” He told her he did what he could. He could only save their closest family. It was too expensive. He chose.

Yet some, with less money and less influential friends, tried. The Thalheimer family of Richmond, Va. was a second example I discovered.

William Thalheimer was a well to do retailer and community leader.  He brought over a few scores of Jewish students who in Germany were training to be agriculturalists at a school in Gross Breesen.  He set them up, at his personal expense, on his farm in remote S.W. Va., Hyde Park Farm, as student agriculturalists. The families of the students were left behind.

Alvin Johnson, a non-Jewish Nebraskan with extensive agricultural experience, was the founder of the New School in New York.  In 1933, Johnson, with funding from Hiram Halle (Gulf Oil), created the University in Exile. The University in Exile brought to the U.S. primarily Jewish academics, scientists, and intellectuals; the garbage Hitler had cast out of German Universities as unfit to teach German society.

Johnson recognized German academic suicide and opportunity for America.  He had the kahunas, to battle the State Department. Johnson eventually brought in hundreds of Jewish intellectuals who enriched America immensely.

But there were other Jews, non-intellectuals who were trapped and could still be saved. Johnson recognized the Stern “loophole”.  It was an expensive option. Johnson gathered funding, some from Jews and much from non-Jews. He formed a corporation, the “Alvin Corporation”.

Johnson’s humanitarian effort worked closely with MacRae to relocate terrorized German and Austrian Jews to Van Eeden. The Jewish refugees were facing probable death because of Nazi German anti-Semitic policy during what would become known as the Holocaust.  The unique effort to transplant Jewish refugees, most with little farm experience to rural North Carolina as agriculturalists, bypassed the U.S. State Department’s extremely restrictive immigration policy towards Jews, even as the Jewish situation became dire.  Johnson placed advertisements in German papers seeking Jews to come to Van Eeden as “farmers”.

Johnson and non-Jews did what Stern dreamed about.  Johnson’s dream was to bring in and settle as farmers, men, and women of the land, 100 families.  The Van Eeden Holocaust rescue effort in rural North Carolina was a uniquely American response. Regrettably, the number of families that were saved in Van Eeden was small because of the commencement of World War II.

April 18, 2018, the North Carolina Highway Historical Marker Program erected a new historical marker, ID:D-117, titled Van Eeden, on US 117 at the Camp Kirkwood Road intersection with Murphy Road in Watha.  The short text of the marker reads,” Jewish refugees from Nazi Germany lived, 1939-46, at agricultural colony founded in 1909 and revived by Alvin Johnson.  Two mi. SW.” The short text lightly touched on the previously under-recognized humanitarian effort centered on the rescue of Jews from the Holocaust that became a reality in North Carolina.

Alvin Johnson, like Herman Stern, was asked about his effort to save Jews.  Johnson’s response was more of a lament.  He wished he could have saved hundreds of thousands, he said.  He could not. But for those he did save, for them, their children and their children’s children, each life he saved became a world.  Alvin Johnson, Hiram Halle, Hugh MacRae, North Carolina, chose.

Jerry Klinger is the president of the Jewish American Society for Historic Preservation.