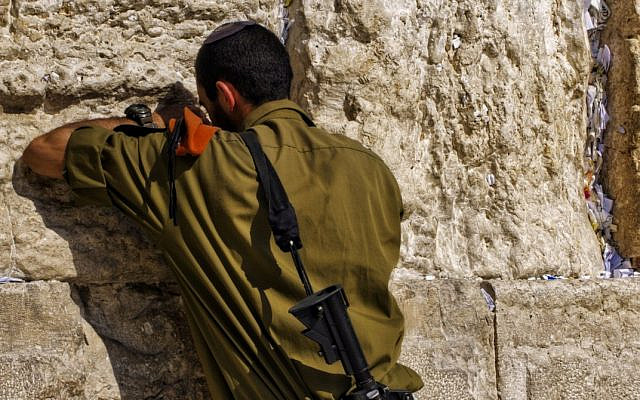 In June 2016, when Israel acquired the first two F-35s fighter planes, the following question was posed to Rav Yehuda Aviner, the head rabbi of the Israeli Yeshivat Ateret Kohanim: “With Hashem’s kindness, the State of Israel received F-35 Stealth Fighter Jets.  Should the blessing of Shehechiyanu, the blessing of renewal be recited, or is it not recited because the fighter plane is a weapon of war? And Rabbi, if it should be recited, who should say the blessing?”

In 2002, a young man who was about to participate in his IDF swearing in ceremony, asked a similar question:  At the height of the ceremony, after the soldiers have taken the oath of allegiance, the highest ranking officer calls the soldiers up, one at a time and gives each soldier two gifts: a gun and Tanach (Hebrew Bible). The gun so that they can defend the country, a Tanach so that they can know WHY they’re defending it. “When I receive my gun, asked the soldier, should I make the bracha of Shehechiyanu?”
Like the F-35 it’s a good question because the blessing of Shehechiyanu is generally said when you receive or experience something new and happy – but not for a sad event.  A gun is carried because we have enemies who sadly want to destroy us. Yet Rav Aviner answered that a Shehechyinau should be said when a soldier receives his gun: “He should say the words: ‘Thank you God for allowing me to live and reach this time’. That we have guns and that we have an army should not elicit sadness.
“Aderaba”, he said: “just the opposite; it should elicit joy, that we have merited to become a free nation in our homeland, to have a Jewish government an army to defend ourselves”.
As Dr. Moshe Avital z”l, a Holocaust survivor I had the privilege of interviewing said to me a few years ago: “imagine what it would have meant to have a gun in the camps. What would we have done for a country to flee to? To be part of an army?” Dr. Avital shared how after surviving six concentration camps he snuck into Palestine and was elated to fight in the Haganah – to be able to finally defend himself and his people.
A Jewish soldier makes a Shehechiyanu on his gun and Rav Aviner ruled that the head of the IAF, the Israeli Air Force, should recite the blessing of “Hatov V’hamativ” – the blessing that “God is good and does good”, over the F-35 Fighter plane. Why? Because even though these are weapons, the joy and pride in being able to defend ourselves demands these blessings.
But these blessings are not just about pride and joy; it goes deeper. One of the great religious Zionist thinkers Rav Tzvi Yehudah Kook wrote: “Fighting to protect our homeland is a mitzvah.  It is a mitzvah binding on all Klal Yisrael. Therefore, everything connected with it, every gun and every weapon that is our response to our enemies, everything connected with establishing and protecting Jewish sovereignty, ‘Hakol Hu Kodesh’  – “It is all holy.”
The soldiers we remember today – they are all holy and what they use to defend the Jewish people, even what they wear takes on a level of holiness. Rabbi Aharon Lichtenstein tz”l , head rabbi of Gush, was once asked by a student, a soldier in Israel, whether he had to change out of his dirty military clothes before praying the Mincha service. Rav Aharon posed the question to his teacher Rabbi Soloveitchik who answered, “No –he doesn’t have to change his clothing because his uniform is like the ‘bigdei Kehuna’ – like the Priestly garments.”
Another great Rabbi, Reb Shlomo Zlaman Auerbach was approached by one of his students who inform him that he was leaving Jerusalem to go to Tzfat to pray at the graves of the great rabbis buried there.  Rav Auerbach said to him, “You don’t have to go to Tzfat to pray at the graves of the righteous, just go down the block to Har Herzl, to Israel’s national cemetery, that’s also where the tzadikim (righteous) are buried.”
Those who gave their lives for Israel, who defend our people and our land are holy people.
Their uniforms are like that of the Cohanim (Jewish priests) and their weapons demand a blessing.  They put everything on the line for us, their people, and so we owe them – our holy soldiers – everything.
About the Author
Rabbi Mark Wildes, known as The Urban Millennials' Rabbi, founded Manhattan Jewish Experience (MJE) in 1998. Since then, he has become one of America’s most inspirational and dynamic Jewish educators. Rabbi Wildes holds a BA in Psychology from Yeshiva University, a JD from the Cardozo School of Law, a Masters in International Affairs from Columbia University and was ordained from Yeshiva University. Rabbi Mark & his wife Jill and their children Yosef, Ezra, Judah and Avigayil live on the Upper West Side where they maintain a warm and welcoming home for all.
Related Topics
Related Posts
Comments