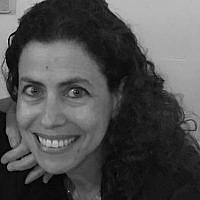 The Blogs
Toby Perl Freilich
Apply for a Blog
Please note that the posts on The Blogs are contributed by third parties. The opinions, facts and any media content in them are presented solely by the authors, and neither The Times of Israel nor its partners assume any responsibility for them. Please contact us in case of abuse. In case of abuse,
Report this post. 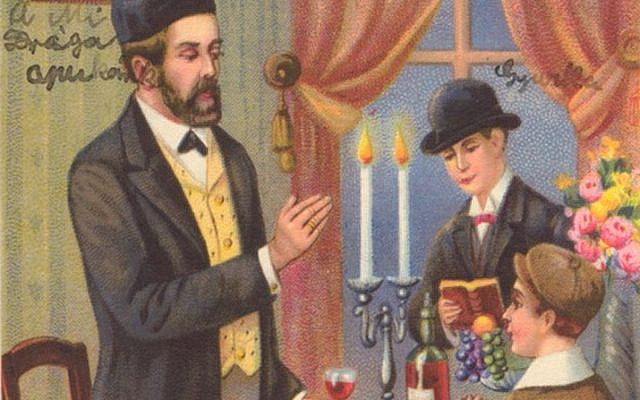 'The rituals of Shabbes and holidays and the lively Hasidic niggunim as well as their soulful prayer marked the happiest and deepest memories of my father’s prewar life.' [Image from the Joseph and Margit Hoffman Judaica Postcard Collection, The Folklore Research Center at the Mandel Institute of Jewish Studies, The Hebrew University of Jerusalem; available via the National Library of Israel Digital Collection]

The stories of survival during the Holocaust that my father, Yitzchak Freilich, told were laced with liturgical references. In recounting his first Shabbes (Sabbath) as a prisoner in the Pustkow camp in southeastern Poland early in the war — forced for the first time to violate the Sabbath by performing hard labor — he returned to his barracks exhausted and despondent and fell into a deep sleep.

Dreaming that he was at home with his family for Seudah Shlishit, the afternoon Sabbath meal, he woke himself up singing zemirot, songs traditionally sung around the table.

His long and harrowing tale ended on a similar note: five camps and as many years later, as his Russian liberators approached Theresienstadt, my father and some of the other prisoners spontaneously burst out singing “Avinu Malkenu,” the hallowed prayer of the High Holidays. By then, he was the only survivor of his immediate family.

This sort of musical bracketing of his wartime experiences is not surprising given my father’s upbringing. The fourth of five children born to a Hasidic family in 1922 in Radomyszl Wielki, a tiny Polish shtetl, his father, Asher Freilich, was a traveling ba’al tefillah, an itinerant prayer leader. 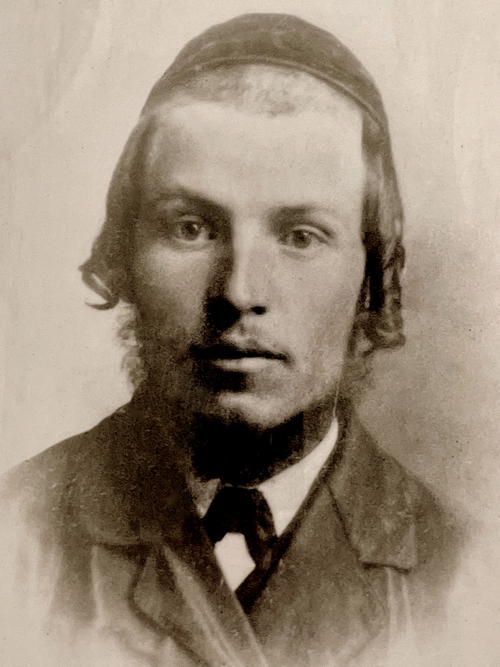 My grandfather’s route was guided by a quest for Hasidic davening (prayer) that dug deep into his soul, and he was frequently accompanied by my father and my uncle Naftuli, my father’s older brother. Occasionally, my grandfather or others in the shtetl hosted visiting Hasidic dignitaries, such as the Dembitzer or Zabner rebbes, who might leave behind a little known but striking tune, known as a “niggun” (pl. “niggunim“), that was then incorporated into the family’s repertoire.

The rituals of Shabbes and holidays and the lively Hasidic niggunim as well as their soulful prayer marked the happiest and deepest memories of my father’s prewar life. The household was poor, but my father’s memories were invariably warm, loving and inextricably linked to the music he had heard at home when his family had been intact.

In the late 1990s, with my father’s health failing and his depression deepening, my brother, Mel Freilich, had the brilliant inspiration to sit my father down over the course of a number of Shabbes and holiday eves to videotape him singing the tefillot (prayers), piyyutim (liturgical poems), zemirot, and other songs that had formed the soundtrack of his childhood. 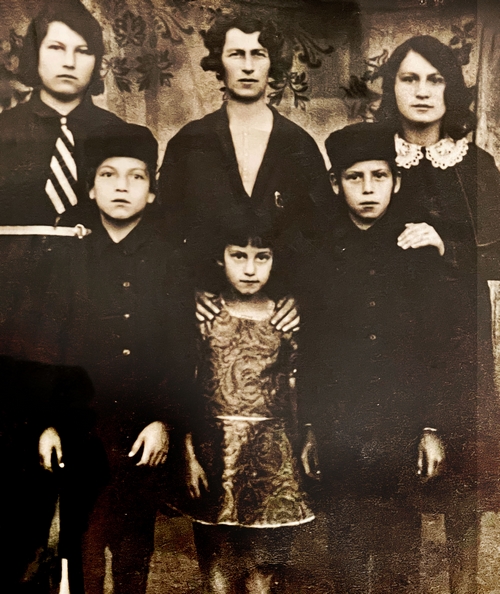 Mel also asked him to recall the rituals surrounding the holidays and the origin of the niggunim, insisting that my father speak in Yiddish — an astute directorial prompt, as it allowed my father to vividly channel his boyhood memories including the folkways of the town’s Jews.

On Fridays, his mother prepared a lunch of farfel and tzikker arbis (lima beans), a modest meal to ensure that they came to the main meal that night with a keen appetite. On Purim, the matzos were baked in a communal oven and hung from the attic rafters until Pesach to keep the mice at bay.

On the morning of Lag Ba’Omer, the rebbe of the kheder (children’s religious school) took them to the woods; they carried hard-boiled eggs and bagels and crude bows and arrows (“a feil und boigen“) made of two sticks and a string. They would merrily shoot into the air, vaguely in the direction of the birds so that it was never a surprise when they failed to capture any quarry. He recounts the precise order of tefillot and niggunim on Friday night: what was recited after the fish; which zemirot were sung at Seudah Shlishit.

My father passed away in 2002, and only my brother – the keeper of the family’s flame – watched the videos in toto, my sister and I not having the heart. 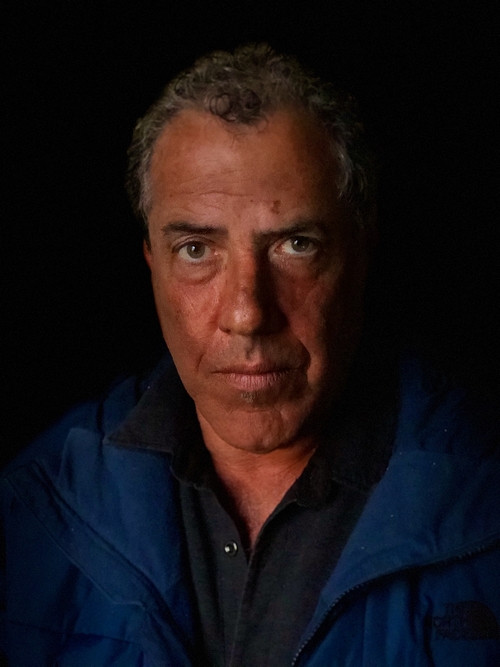 A few years ago, my sister’s husband died and suddenly the mortality of our generation became all too real, as was the anxiety that these memories would pass along with us if we didn’t ensure their preservation.

I became an Israeli citizen a couple of months ago, joining my sister, who made aliyah in 1968 and lives on Kibbutz Tirat Tzvi. My parents are buried on the kibbutz, and most of their grandchildren and great-grandchildren either live in Israel or think of it as a second home, so it made sense for our father’s tapes to find a home here as well. I reached out to my friend, Naomi Schacter, who heads International Relations at the National Library of Israel, and she put me in touch with Dr. Gila Flam, the head of the Music and Sound Archives, Collections and Reading Room, who welcomed our precious legacy to the NLI’s ethnographic collection.

The videos are now preserved and available online for all to see. 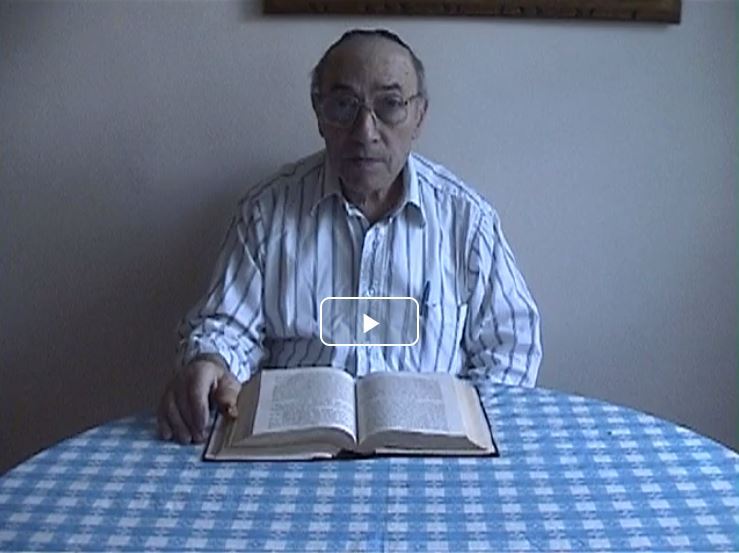 Click to view two clips of Yitzchak Freilich singing various songs and niggunim, including some traditionally sung on Purim, Passover and, seasonally, on the High Holidays (click for video), now part of the National Library of Israel collection 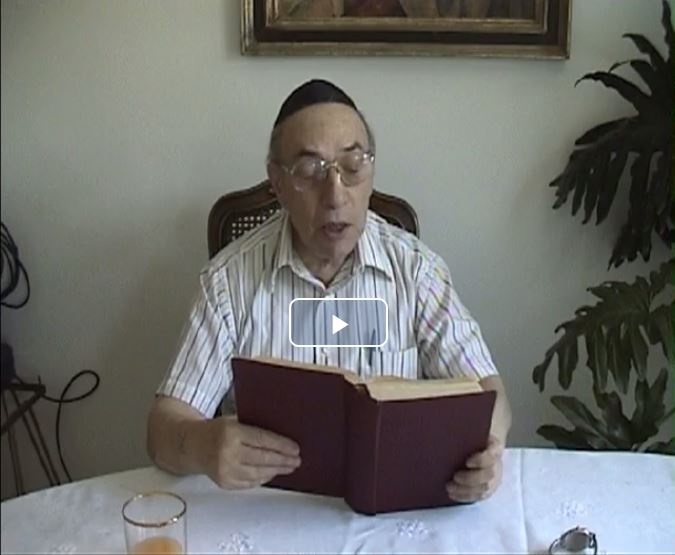 Click to view two clips of Yitzchak Freilich singing Shabbes and Shavuos songs from his childhood, now part of the National Library of Israel collection

Once the videos were online, I began to watch them more assiduously, finding new connections between the origin stories of these niggunim and my father’s Holocaust stories. For example, my father sang an outstanding and exceedingly rare rendition of “Yah Ribon Olam,” the popular table hymn sung on Shabbat. It was not until I listened to my brother’s recording that I heard the source of this niggun, which my father attributes to the “Melitzer rebbe,” Reb Yitzchokele Horowitz. “Melitz” rang a bell and I realized it was the Yiddishized reference to the town of Mielić, where my father had been imprisoned as a slave laborer in the city’s aircraft factory, which had been appropriated by the Nazis and turned into a camp. It was also where he had received his distinctive tattoo — a large KL on his right wrist, an acronym for Konzentrationslager Lager (concentration camp). But when asked, my father would declare that KL stood for “koidesh l’Hashem” — Holy to God.

My mother, Chana Perl Freilich, also a survivor from a Hasidic shtetl in Poland, punctuates the videos with a few well-timed and powerful cameo appearances. The Yom Kippur eve recording is particularly difficult to watch as my father repeatedly breaks down. Following his third or fourth failed attempt (before finally rallying), my mother comes into frame, kisses him on his head and says in Yiddish, “You know what? Today is Yom Kippur eve… And I don’t think you have so much to repent — you haven’t sinned very much.” 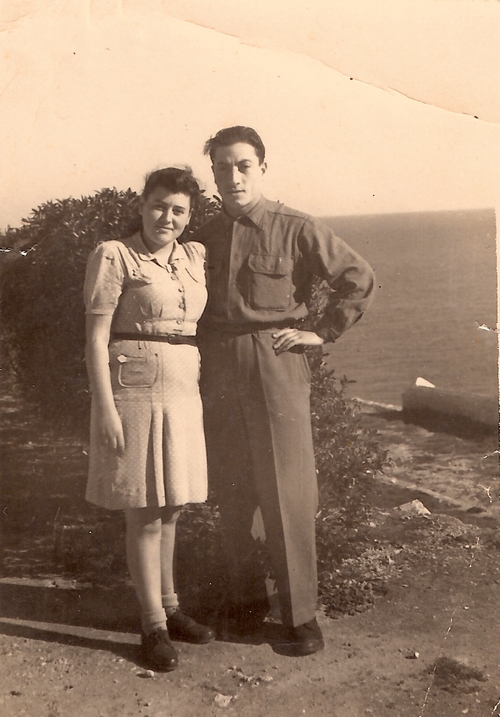 Implicit in her comments is the grudge many observant survivors bore toward God for the unwarranted catastrophe visited upon pious Jews. My mother would frequently wave a rhetorical fist at the heavens, saying “Ikh hub a din v’khesbon mit dem Riboineh Shel Oilem” – “I have an accounting with God”.

It was at once an expression of unquestioning faith yet resentment toward God, testifying to a longstanding and weary, yet intimate relationship.

Yom Kippur was a loaded day for my mother as well as my father, a day heavy with memory and fate. There’s a particularly chilling story related to Yom Kippur and my mother’s shtetl, Szydłowiec. The Jews of her ghetto were rounded-up and transported to the camps two days after Yom Kippur, on September 23, 1942. A surviving eyewitness recounts that as they were gathered in the central square before being deported to Treblinka, the rabbi of the shtetl, Chaim Yekusiel Rabinowitz, said, “Yidden, we will not even have anybody left to say Kaddish for us, so we are obligated to say Kaddish for ourselves.” 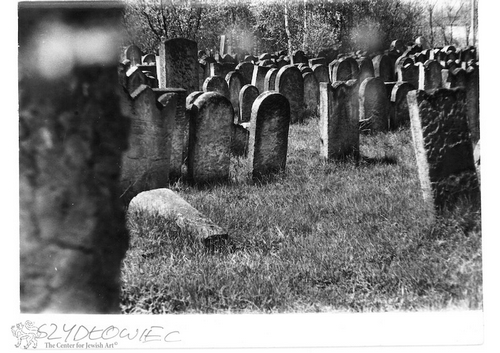 Jewish cemetery in Szydłowiec (Photo: Jerzy Budziszewski). From the Center for Jewish Art at the Hebrew University of Jerusalem; available via the National Library of Israel Digital Collection.

All of the assembled began to wail and chant Kaddish, the mourner’s prayer: “Yisgadal v’yiskaddash shemei rabba.”

A day earlier, my mother along with a married cousin and her husband, Gitele and Yossel Friedenson, had been fortunate to escape to the nearby town of Starachowice, having secured forged work papers for the labor camp. They barely survived the brutal conditions and were transported to Auschwitz on Tisha B’Av, July 30, 1944.

On the Shabbes tape, my father says that it was the custom among the Hasidim in his region to begin the Friday davening with a “kapitl Tehilim” — “a little bit of Psalms”, and he begins to chant the customary Psalm 107, reaching the following words:

Let them give thanks to the Lord for his unfailing love
and his wonderful deeds for mankind,
for he satisfies the thirsty
and fills the hungry with good things.
Some sat in darkness, in utter darkness,
prisoners suffering in iron chains,
because they rebelled against God’s commands
and despised the plans of the Most High.
So he subjected them to bitter labor;
they stumbled, and there was no one to help.
Then they cried to the Lord in their trouble,
and he saved them from their distress.

He finishes midway through the Psalm and says, “You see, I didn’t want to end on hunger, thirst, and bondage.”

And so, I will stop where he chose to end:

He brought them out of darkness, the utter darkness,
and broke away their chains.

About the Author
Toby Perl Freilich is a documentary filmmaker and writer living in Jerusalem. She co-produced and directed 'Moynihan,' a film about the late NY senator. Freilich also directed, produced, and wrote, 'Inventing Our Life: The Kibbutz Experiment,' and wrote and co-produced, 'Secret Lives: Hidden Children & Their Rescuers during WW II.' She has written for the Jewish Review of Books, Tablet, the Forward, and Sh’ma. Her current project is a film about artist Mierle Laderman Ukeles, the first artist-in-residence at the New York City Department of Sanitation.
Related Topics
Related Posts
Comments