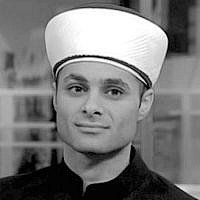 The Blogs
Mohamad Jebara
Apply for a Blog
Please note that the posts on The Blogs are contributed by third parties. The opinions, facts and any media content in them are presented solely by the authors, and neither The Times of Israel nor its partners assume any responsibility for them. Please contact us in case of abuse. In case of abuse,
Report this post.

Discord and friction among any people is always disconcerting. Yet conflict between brethren, who share so much, is far more distressing.

It is all a matter of perspective. To many modern Jews, the Palestinian-Arab is typecast as “uncivilized, destructive and lacking humanity.” To many modern Arabs, the Jew is stereotyped as “deceptive, manipulative and cruel,” not much different from the view Europeans held of Jews for centuries. For the latter, the Jew was presented as “killers of Christ” under a “blood curse”. In fact it was not until the conclusion of Vatican 2 in 1965, that the Catholic church officially changed its outlook on the Jewish people, stating, “True, the Jewish authorities and those who followed their lead pressed for the death of Christ; still, what happened in His passion cannot be charged against all the Jews, without distinction, then alive, nor against the Jews of today. The Jews should not be presented as rejected or accursed by God, as if this followed from the Holy Scriptures.”

There is no doubt that the demonization of the Jewish people for centuries by religious and political authorities gradually escalated from occasional acts of persecution whenever a calamity struck, whereby the Jew was the scapegoat, culminating in a tragic holocaust.

The respect accorded to Jews by early Muslims cannot be underestimated. In the first period, Jews and Christians, both viewed as people of the Book, were considered part of the Ummah, “the community of Faith”.

The prophet Muhammad was once sitting with his disciples when a funeral procession approached. Standing out of respect, he asked his disciples to do the same. Mystified, they inquired, “That is a Jewish funeral.” To which the prophet quickly responded, “Is it not a human soul, deserving of dignity, honour and respect?”

Even at Muhammad’s death, his armor was pawned to a Jewish merchant. With several wealthy disciples around him, why did he not borrow money from them? That question has puzzled many. Perhaps it was to show by example that the Jewish people should be included in the local economy.

The relationship between Muslims and Jews enjoyed better times. When Muslim conquerors took Jerusalem in 638 CE, Jews were allowed to return to the Holy Land for the first time since Roman Emperor Hadrian permanently expelled them in 135 CE after a failed revolt. Correspondingly, in 711 CE Jewish inhabitants of Iberia, in collaboration with Muslims, opened city gates to let in Muslim conquerors. The degree of freedom which Jews enjoyed under Abbasid rule in Iraq was unprecedented. Till today the rich heritage of Mizrahi Iraqi Jewish learning is well established. Yitzhak Kaduri, Ovadia Yosef and the Sassoon family are a testament to that legacy.

In 1492, when Christian Spain expelled the Jews en-mass, the Ottomans sent their navy to bring thousands of Jews to their territories. Many were brought to Salonika, Alexandria and other parts of the Empire. In lands ruled by Muslims, Jews rose to high government posts including Samuel Ha-Nagid (993-1056 CE), Yaqub Ibn Killis (930-991 CE) and Hasdai Ibn Shaprut (915-970 CE). Muslim peasants in Yugoslavia risked their lives to protect Jews from fascist Nazis during World War Two.

In the same way that Jews enjoyed prominence at various times, they also experienced persecution at other times, including during the Al-Mohad takeover in 12th century Morocco, when they, along with Christians and other Muslims, were persecuted by the puritan sect.

​M​any aspects of history may be idealized while others put out of focus. I am not nostalgic nor am I glorifying what the ancients did; rather my concern is how people can move forward from where we are now. Both sides have made many mistakes, but to dwell on mistakes will not solve the problem. Often when solutions don’t seem to be easily perceived on the horizon, the two sides digress to war and aggression. Both sides, while continuously receding back into the battlefield, claim superficial victories. Yet eventually war exhausts both sides and all parties will be forced to consider an alternative solution, one which will require both sides to compromise for the greater good.

Perhaps if Israel were to allot a percentage of what it spends on defense to rebuilding Palestinian infrastructure and the education of Palestinian and Jewish youth side by side, this would give these young people hope instead of despair. Such a strategy would itself be a more moral and assured form of defense.

Yes, blood has been shed by both sides, both sides have killed and destroyed. Yet, what benefits the Arab and Jew to continue upon this path of resentment through an endless cycle of carnage? Is not the path to reconciliation more advantageous?

Discord among any people is disconcerting, especially in the conflicted relationship between Arabs and Jews, yet do we digress into war and aggression or re-channel our efforts towards positive change?

About the Author
Mohamad Jebara is Chief Imam and Resident Scholar at the Cordova Spiritual Education Center in Ottawa, Canada
Comments