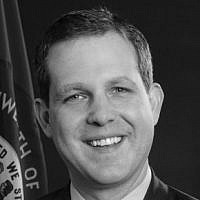 The Blogs
Jonathan Miller
Apply for a Blog
Please note that the posts on The Blogs are contributed by third parties. The opinions, facts and any media content in them are presented solely by the authors, and neither The Times of Israel nor its partners assume any responsibility for them. Please contact us in case of abuse. In case of abuse,
Report this post.

It was an alarming image for a Jewish adolescent growing up in the United States.

Yet, in the 1980s, it was a common theme of our temple youth group gatherings.

Gen X Jewish teens were constantly reminded about demographic trends and intermarriage rates that suggested our community could soon splinter into the dustbin of history — as early as the end of the 21st century.

At the same time, our rabbis began to share a darker take on the holiday of Hanukkah, at variance with the bright and fanciful miracle of our childhood celebrations. Instead of the cheery world of magic oil and brilliant lights, we learned how Judah Maccabee and his brothers successfully revolted against the Greek King Antiochus’s oppressive regime that was exploiting Jewish assimilation, poised to destroy our religion from within. We were warned gravely that 20th century assimilation similarly could lead to our own extinction.

The ’80s indeed were a challenging time for American Jewry. Overt, sometimes violent anti-Semitism had almost entirely vanished, the horrors of the Holocaust still fresh in the minds of our parents’ generation, felt like ancient history. And yet, in many areas of middle America, such as my old Kentucky home, we were still the “other”: There were social clubs my family couldn’t join, classmates’ parties to which I wasn’t invited, civic organizations that excluded my parents – all because of our separate faith. Anti-Zionism coincidentally peaked during the decade, as Israel’s war in Lebanon provoked unbalanced, disproportional coverage of the Jewish State from much of the American media.

It was easy to understand why so many U.S. Jews – particularly our youngest – took refuge by fading into the multi-colored fabric of secularized Christianity that enveloped American culture. With Gentile discrimination so diffuse and subtle, the only remaining strident enemy in the 3,000-year battle for Jewish survival was, in fact, ourselves.

But then the 1990s brought forth a modern-day Judah Maccabee: Adam Sandler.

OK, I exaggerate just a little.

What the ’90s did bring was an army of modern Maccabees, in the form of prominent, familiar, likable Jews thrust into the pop media spotlight: Jews that were both clearly identifiable and proud of being both American and Jewish.

This helped produce a sea change in Christian Americans’ acceptance of their Jewish neighbors. In the vast center of the country where few Jews lived, ignorance previously had bred distrust and suspicion. Now, through the magic of television – and shows such as Northern Exposure, Beverly Hills 90210, Friends, and most prominently, Seinfeld – Jewish comedians, actors, and characters entered the living rooms of middle America. Rural citizens who’d never met a Jew before now “knew” dozens, and understood that “they were just like us” – maybe a bit wackier.

Just as significant was the impact on Jewish Americans. We could now hold our heads up a bit higher, feel a little more comfortable to publicly pronounce our faith. We were now the tellers of Jewish jokes, alternatively wry and self-deprecating, instead of divisive and mean-spirited.

It was a phenomenon that Jonathan Alter – in his famous 2000 Newsweek cover piece heralding Joe Lieberman’s history-making Vice-Presidential candidacy – labeled the “Seinfeldizing of America.”

And at its epicenter in 1994 was a hastily produced, three-and-a-half minute musical segment on Saturday Night Live’s “Weekend Update.”

It’s a nostalgic treat to revisit Sandler’s premier performance of his now-classic “The Chanukah Song”: The comedian’s now all-too-familiar, man-child vocal affectations are, on the old video, refreshingly charming – emanating from the self-mocking smile of the skinny Gen Xer, struggling to read his cue cards.

But as silly as his lyrics were on the surface, Sandler’s sing-songy outing of pop culture icons with Jewish blood was sort of revelatory to his fellow Chosen People. Who knew that James Caan — Sonny Corleone! — lit the Hanukkah menorah? And while the Jewishness of Mr. Spock (Leonard Nimoy) was well-known – we all had learned in Hebrew School that the Vulcan hand salute was a tribute to an ancient Jewish blessing gesture – the Hebraic faith of Captain Kirk (William Shatner) was a welcome surprise. And Han Solo a quarter Jewish? Not too shabby.

(Actually, Harrison Ford is fully half-Jewish. And contrary to another Sandlerian stanza, baseball Hall-of-Famer Rod Carew – whose wife and children were Jewish – did not convert: The former California Angel and Minnesota Twin was never a Member of the Tribe. But who’s kvetching?)

I remember picturing myself as a child in the ’70s, literally the only kid on my block (with my sis) without a Christmas tree. What I would have given to have known at the time that the epitome of coolness – The Fonz himself (Henry Winkler) — had a Bar Mitzvah!  I imagined millions of other children learning the same way that many of their celebrity idols spun the Hanukkah dreidel.

After near saturation of holiday radio play rotations (station managers must have determined it both a popular and politically correct inclusion), as well through its subsequent sequels – the risqué Part 2 in 1999; the NSFW Part 3 in 2002 – the song intended as a filler comedy sketch emerged as a holiday icon.  And with its central, irresistible prophecy – that there are “so many Jews are in the show biz” – there was one simple conclusion to be drawn:

It’s cool to be Jewish!

(Of course, Sandler’s alter ego, Billy Madison, later proclaimed that it was cool “to pee your pants“; but we won’t examine here the history of Jewish incontinence.)

Admittedly, “The Chanukah Song” does very little to educate or inspire its listeners about the central principles of the faith that make me and so many others so proud to be Jewish. Nor has it ameliorated the same demographic trends, intermarriage rates and anti-Zionist propaganda that were a concern in the 1980s. And as long as humankind remains an imperfect species, anti-Semitism will continue to fester, albeit under the societally-accepted surface here in the U.S.

Yet in this, the most wonderful time of the year, when modern-day Antiochian mad men exploit naked consumerism to suck out the spirituality of the winter holidays, when attention-hungry Chicken Littles conspire to manipulate public sentiment by alleging phony wars on multi-denominationally embraced holidays, it’s comforting to realize that a silly, little comic ditty has played a small role in revitalizing the true meaning of the season.

So the next time you hear “The Chanukah Song” – whether you’e a Jew, Jew-ish or Gentile – take a cue from the Maccabees and make an appointment to spend a little time culturally and spiritually enriching the lives of your children and/or grandchildren.

About the Author
Jonathan Miller, The Recovering Politician, has been elected twice to statewide office (KY State Treasurer); authored two books on faith and public policy; graduated with high honors from Harvard's college and law school; co-founded No Labels, a national grassroots reform movement; played straight man on The Daily Show with Jon Stewart; reached the final table of the World Series of Poker; and with his summer camp sweetheart, raised two remarkable teenage daughters.
Comments