This morning, an angel led me into the Garden of Eden and I met my wife Miriam. Other angels had done the same on other Friday mornings.

What happen when Miriam and I found ourselves in the Garden of Eden? We worked together cooking lunch for our Shabbat afternoon meal. Miriam handed me the bunch of scallions that she had washed to chop into tiny discs. She rubbed the baking pan with olive oil, baked potatoes in the microwave, and gave the hot potatoes to me to slice and arrange in the pan. Listening to heavenly music from our favorite disc, we sprinkled garlic and herbs on the potatoes and spread a layer of cottage cheese that we dotted with the scallion discs and grated cheese. Miriam covered the pan with foil as I set the oven for 30 minutes at 180 degrees Centigrade. 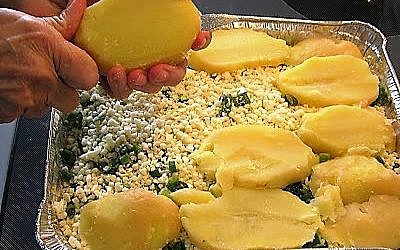 How did we discover that the Garden of Eden was hidden our kitchen? We realized that the biblical word for “angel” malach and “food” ma’achal are written with the same four Hebrew letters to teach us that angels are spiritual messages arising from everyday life. As Hebrew speakers living in Israel, we know that the feminine form of the word for “angel” malach is “work” malachah to tell us that spirituality can be experienced in all the meaningful work that we do. When Miriam and I work together in our kitchen preparing food, we discover that we are in the Garden of Eden like Abraham and his wife Sarah had discovered millennia ago.

He was sitting at the entrance of the tent in the heat of the day. Looking up, he saw three men (angels in disguise) standing near him. As soon as he saw them, he ran from the entrance of the tent to greet them. (Genesis 18:2) Abraham rushed back to the tent to Sarah and said, “Hurry! Take three measures of the finest flour! Kneed it and make rolls!” Then Abraham ran to the cattle to choose a tender and choice calf. (Genesis 18:6, 7)

The Midrash, a compilation of two thousand years of creative narratives that elucidate the biblical text, asks why does it say “ran?” Why doesn’t the Torah just say Abraham took a calf to grill? The Midrash explains that Abraham ran after a calf that ran away from him into a cave. He discovered that the cave was the burial place of Adam and Eve. At the far end of the cave, he saw intense light emanating from an opening. When he came close to the opening, he found himself standing at the entrance to the Garden of Eden. About to enter the pristine garden, he remembered that his wife and three guests were waiting for lunch back at the tent. What should he do? Should he trade paradise for a barbeque?

The Bible tells us that he chose to return to the tent and join his wife in making a meal for their three guests. Abraham realized that paradise is what we create with our spouse at home. Other visions of paradise are either mirages or lies.

Enjoy life with the wife you love through all the days of your life. (Ecclesiastes 9:9)

In Fragments of a Future Scroll, Rabbi Zalman Schachter tells a Hasidic tale set in Eastern Europe more than a century ago that teaches the essence of Kabbalah, the down-to-earth spiritual tradition of Judaism. It emphasizes that spiritual mysteries can only be understood at the level of everyday life.

Shmuel Munkes was walking down a road on his way to see his illustrious Rebbe when an elegant carriage stops. A well-dressed dandy invites him to ride with him since he is going to see the Rebbe, too. The dandy brags about being the son and grandson of kabbalists. Shmuel asks this self-proclaimed kabbalist for help in deciphering a kabbalistic text of cosmic proportions that he said he had found on a scrap of paper in an old holy book:

“In the very primal beginning there was chaos—all was sundered and separate. Grainy nuclei unconnected. Swirling. Then fiat, they were in one sphere. The sphere unfolded into an orb. On the orb-lines appeared, forces cut the space in fields. These fields became centered in a point and enfolded the point. Peace was made between fiery angels and the angels of the vital fluid and in their cooperation all came our as it ought to be.”

The dandy expressed amazement at this mystical text that he admitted he could not place. Shmuel explained that since he was a young student, he would have to wait weeks before the Rebbe would see him. He said, “Since you are such an important man, you will be invited to see the Rebbe soon after you arrive in town. Please ask the Rebbe about the text and tell me what he says.” The dandy agrees and does get to see the Rebbe without a long wait. The Rebbe slowly reads from the scrap of paper, closes his eyes and stares into inner places searching for the deepest meaning the text. He opens his eyes and turns to the anxious dandy explaining the text with one word: kreplach (a Jewish version of ravioli).

“In the very primal beginning there was chaos—all was sundered and separate, grainy nuclei unconnected swirling.” (That was flour.) “Then fiat, they were in one sphere.” (Dough.) “The sphere unfolded into an orb.” (The dough was rolled out flat.) “On the orb lines appeared, forces cut the space into fields.” (Of course, diamond shaped pieces of dough are cut and meat put in.) “The fields became centered in a point and enfolded the point. Peace was made between fiery angels and the angels of the vital fluid.” (As the pot was filled with water and put on the stove to boil, the kreplach were put in.) “And in their cooperation all came out as it ought to be.”

The Rebbe laughed when he finally saw Shmuel. “What a dish you cooked up,” he said.

My “Shook Shopping” blog post in my book Through a Bible Lens: Biblical Insights for Smartphone Photography and Social Media http://throughabiblelens.blogspot.com teaches how to you can find spirituality in everything you do. Written in Twitter tweets, the language of today’s digital culture, it begins with our daughter Iyrit shopping in the shook (marketplace) in Israel for the ingredients to make her family’s Shabbat meals. 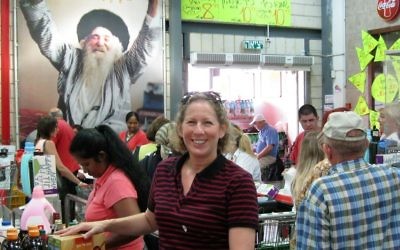 It continues with the thoughts of three of the of the 20th century’s leading spiritual leaders based upon the biblical passage “For the Lord thy God walks in the midst of your camp.” (Deuteronomy 23:15): Talmudic scholar Rabbi Joseph B. Soloveitchik, known as “The Rav” by the hundreds of rabbis he ordained at Yeshiva University in New York, The Lubavitcher Rebbe, Rabbi Menachem M. Schneerson, head of Chabad Hassidism that reaches out to Jews throughout the world, and Rabbi Abraham Y. Kook, the first Chief Rabbi of pre-state Israel and author of the poetic book Orot Hakodesh (Holy Lights).

In Rabbi Soloveitchik’s seminal book Halakhic Man, he teaches that Judaism does not direct its gaze upward but downward.

It fixes its gaze upon concreate reality an every aspect of life, from the mall to the banquet hall.

The Lubavitcher Rebbe teaches that we must strive to draw spirituality down into every part of life, from our work to our social life.

A person’s work should not only not distract him from his pursuit of G-d, but they must become a full part of it.

Chief Rabbi Kook explains that the first message that Moses chose to teach the Jewish people as they were about to enter the Land of Israel was to fuse heaven to earth.

They were charged to make the mundane to rise up to touch the Divine, the spiritual to vitalize the physical, not only as individuals but as an entire nation.