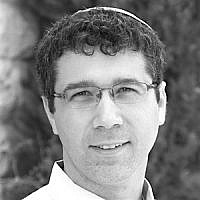 The Blogs
Chaim Navon
Apply for a Blog
Please note that the posts on The Blogs are contributed by third parties. The opinions, facts and any media content in them are presented solely by the authors, and neither The Times of Israel nor its partners assume any responsibility for them. Please contact us in case of abuse. In case of abuse,
Report this post.

Limits to the mitzva of Rejoicing

In a previous shiur, we noted that the mitzva of rejoicing on a festival is exceptional, in that it combines concrete action and inner emotion. We also said that this combination necessitates special caution. We are dealing here with a mitzva that can easily turn into wild abandon and blur the spiritual aspects of the commandment. When Halakha nurtures and stirs up a volatile emotion like joy, it also imposes limits, for it is well aware of the dangers posed by unrestricted emotion. We shall bring here a famous restriction cited by Rambam, which aims at diminishing these dangers:

And while one eats and drinks himself, it is his duty to feed the stranger, the orphan, the widow, and other poor and unfortunate people, for he who locks the doors to his courtyard and eats and drinks with his wife and family, without giving to eat and drink to the poor and bitter in soul – his meal is not rejoicing in a divine commandment, but a rejoicing in his own stomach. It is of such persons that Scripture says: “Their sacrifices shall be unto them as the bread of mourners, all that eat thereof shall be polluted; for their bread is for their own appetite” (Hoshea 9:4). Rejoicing of this kind is a disgrace to those who indulge in it, as Scripture says: “And I will spread dung upon your faces, even the dung of your sacrifices” (Malakhi 2:3). (Hilkhot Yom Tov 6:18)

We find another such limitation imposed upon the mitzva of rejoicing in a famous halakha:

Mishna: We may not marry women on Chol Ha-mo’ed, neither virgins nor widows, and we may not perform levirate marriage, because it is joy for him …

Gemara: And if it is joy for him, what of it? … Because we do not intermingle one joy with another joy. Rabba bar Rav Huna said: Because [the groom] will put aside the joy of the festival, and involve himself with the joy of his wife. (Mo’ed Katan 8b)

Why is marriage forbidden on the intermediate days of a festival? Rabba bar Rav Huna’s explanation is easy to understand: we are concerned that the groom will neglect those actions that give expression to the rejoicing required by the festival. But what is the meaning of the first explanation offered by the Gemara, “because we do not intermingle one joy with another joy”? Tosafot explain:

Tosafot explain that a person must not mix other joys together with the joy required by a mitzva, not only on the practical level, but on the emotional level as well. This is an additional limitation: rejoicing on a festival must be prevented from turning into mundane joy, even in the case of legitimate rejoicing, like the joy of marriage. The Torah is very strict in its insistence that the joy remain pure, for there is grave danger that the joy of the mitzva will turn into empty joy. Hence, it is forbidden to intermingle this rejoicing with other joys.

Rambam adds another limitation, aimed at preserving the purity of rejoicing on a festival:

When one eats and drinks and rejoices on a festival day, he should not overindulge in wine, merriment, and frivolity, in the belief that the more he does of this the more he is fulfilling the commandment to rejoice. For drunkenness, excessive merriment, and frivolity are not rejoicing but madness and folly, and we were commanded to indulge not in madness and folly but in the kind of rejoicing which partakes of the worship of the Creator of all things. For Scripture says: “Because you did not serve the Lord your God with joy, and with gladness of heart, by reason of the abundance of all things” (Devarim 28:47), showing that one should serve God with joy, whereas it is impossible to serve God in the mood created by merriment, frivolity, or drunkenness. (Hilkhot Yom Tov 6:20)

When a person rejoices, he must conduct himself with restraint, because wild rejoicing and rowdiness have no part in the joy that is an element of the service of God, for “it is impossible to serve God in the mood created by merriment, frivolity, or drunkenness.” How important is it to repeat and reiterate this bold assertion in our day!

The Role of Joy in the Worship of God

The closing words of the passage cited from Rambam raise an additional point. Rambam notes that rejoicing partakes of the service of God. What does he mean by this? What is the role of joy in our worship of God?

Rabbi Soloveitchik relates to this point as well. In this context, he refers to the well-known words of Ramban in his critique of Rambam’s Sefer Ha-mitzvot:

For Moshe was commanded at Sinai that Israel should recite a song [of praise] on their appointed days in honor of God who took them out of Egypt, split for them the sea, and set them aside for His service. [Later,] David came and instituted for them this Hallel for them to sing … And it appears from their words that [the obligation to recite Hallel] is a Torah obligation, as I have explained. And it is a halakha that was given to Moshe at Sinai, or else it is included in the joy regarding which we have been commanded, as the verse says: “Also in the day of your gladness, and in your solemn days, and in the beginnings of your months, you shall blow with the trumpets” … This being the case, we may interpret that on the festival days, when all types of rejoicing are commanded, singing [God’s] praises is included among them. (Ramban, critique of Rambam’s Sefer Ha-mitzvot, first principle)

What is that spiritual position? In order to clarify the matter, Rabbi Soloveitchik cites another halakha. The Gemara in tractate Mo’ed Katan discusses whether or not a leper observes the special laws pertaining to him on a festival. The Gemara proves that he does from the fact that a High Priest who is a leper observes the special laws of leprosy all year round, and all year round for the High Priest parallels a festival day for an ordinary person:

And surely the status of the High Priest all year is like that of all other people on a festival. (Mo’ed Katan 14b)

Tosafot Ha-Rosh explains the meaning of this passage:

According to most Rishonim (with the exception of Rambam), this Gemara teaches us that the High Priest does not observe any of the laws of mourning, because his status all year long is like that of all other people on a festival. What is the meaning of this comparison? Rabbi Soloveitchik explains that joy stems from standing before God. On a festival day we are bound by the mitzva of rejoicing, because on a festival day we stand before God. The source of the joy is spiritual. The High Priest stands before God all year long. He is, therefore, in a state of joy the entire year, and as a result he is automatically excluded from the laws of mourning. Rejoicing on a festival is not merely an external decoration adorning the holiday; rather, it stems from the spiritual essence of the day.

This article was reposted with permission from the VBM—The Israel Koschitzky Virtual Beit Midrash of Yeshivat Har Etzion. If you enjoyed this shiur by Rav Chaim Navon, click here to view his other shiurim.

About the Author
Rabbi Chaim Navon teaches Gemara and Jewish thought in Herzog College at Yeshivat Har Etzion and at Midreshet Lindenbaum. He is an author of several series of shiurim online at the VBM—The Israel Koschitzky Virtual Beit Midrash of Yeshivat Har Etzion. Rabbi Navon authored a number of books including: Caught in the Thicket: An Introduction to the Thought of Rav Soloveitchik. He studied at Yeshivat Har Etzion from 1992 to 2004 and received rabbinic ordination from the Chief Rabbinate of Israel and Rabbi Aharon Lichtenstein.
Related Topics
Related Posts
Comments