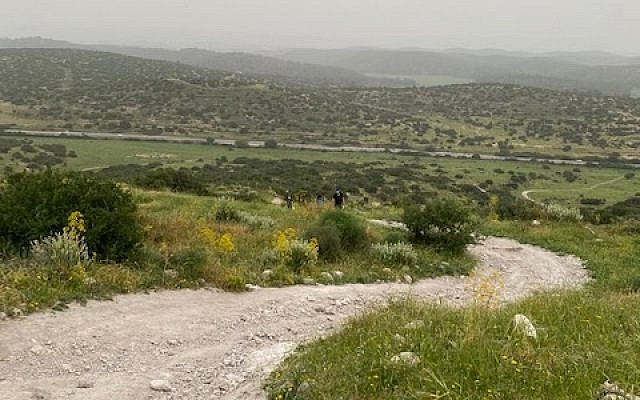 (Based on the book Eretz Yisrael by Rabbi Pinchas Winston, Talking About Eretz Yisrael: The Profound and Essential Meaning of Making Aliyah, 2017)

1) Where in the world is Divine Providence (Hashgacha Pratis) clearly evident on a daily basis?

Eretz Yisrael is the Land of Hashgacha Pratis השגחה פרטית. This is self evident from a pasuk in Devarim.

But the land, to which you pass to possess, is a land of mountains and valleys and absorbs water from the rains of heaven. A land Hashem, your G-d, looks after; the eyes of Hashem your G-d are always upon it, from the beginning of the year to the end of the year (Devarim 11:11-12).

Hashgacha Pratis is the entire reason why G-d created Eretz Yisrael in the first place. The World is imperfect, because evil can exist. We have free will to choose G-d’s Will and to bring Creation to fulfillment; or we can choose the opposite. The world is created on the system of cause and effect. This is seen throughout the stories of the Navi.

Eretz Yisrael is the land of Hashgacha Pratis. This cause and effect relationship is intense. It is so intense that one cannot not help but notice that the hand of G-d is directly involved in all that happens here.

The more we accept Hashgacha Pratis and remain aware of it, the more it makes itself known to us; so that we can respond to it and enjoy it.

Amalek brings doubt (ספק) to the world and results in Hester Panim (hiding the face/actions of G-d). This causes one to have doubt in Hashgacha Pratis. For this reason, Amalek attacked the Jewish Nation on their Exodus out of Egypt; to prevent their settling of Eretz Yisrael. Amalek’s sin is trying to prevent G-d’s “Holy Throne” כס י-ה, from being manifested in Eretz Yisrael. Whereas our goal, as Torah observant Jews, is the exact opposite; to serve G-d by settling all of Israel and observing all of His Commandments (מצוות).

2) Why do Jews tend to choose the materialism of the USA over the spirituality of Eretz Yisrael?

This concept started with Balak, Bila’am and the daughters of Midyan. Midyan represents the klipa of Ta’avah, materialistic desire ( Pri Tzaddik, Chukas). In the desert leaving Egypt on the way to Israel, we sinned with daughters Midyan and this stain has remained with us until this day. This has kept Jews away from wanting to make Aliyah to Eretz Yisrael.

3) How does the story of Yosef, teach us our relation to Eretz Yisrael?

All that happened to Yosef happened to Tzion (Tanchuma, Vayigash 10). Zion is Eretz Yisrael. The actual word in Hebrew has the same numerical value גמטריה  as Yosef.

Most Jews today look at Eretz Yisrael as the brothers, who sold Yosef into slavery, once viewed Yosef. At the end of days, The Land will say “I am Eretz Yisrael ” [where are you?].

4) Is our generation connected to the generation of the Desert מדבר, who sinned with The Spies מרגלים and rejected Aliya?

The Zohar (Shaar Hagilgulim ch. 20) writes that the Jews from the Generation of Desert דור המדבר , will reincarnate in the final generation. We are the final generation!  We have the choice of Tikun (fix past spiritual errors) or not.  The question of our generation is: To make Aliyah or to reject Eretz Yisrael.

5) Where does one have a life totally immersed with G-d?

Rav Akiva taught us that life without G-d and Torah is not life at all. Talmud Kesbos (110b) is very clear that those who live in Israel have a G-d and those that do not, are like those who are not with G-d. Eretz Yisrael is the place we can be closest to G-d in our lifetime. “Life” without the chance to be close to G-d is not life at all. The other options are to maximize one’s physical pursuits and pleasures and then experience a spiritual death.

6) How do we get spiritually close to G-d to the ultimate level called Deveikus דביקות?

We can express our desire to be close to G-d by our actions and willingness to sacrifice physical comfort for spiritual gain. When we learn to rely on G-d for all aspects in our life, then we have reached trust/Bitachon ביטחון and faith/Emunah אמונה . The automatic next step is closeness or  דביקות to G-d.

Eretz Yisrael is the most spiritually practical place to be for a Jew to live.

7) If Israel is so holy, how is it that secular people live in Israel?

Eretz Yisrael (הר הבית) is the central location at which the light of G-d enters the physical creation. Therefore, the more one comes closer to this location the more spiritual the reality becomes and the closer one comes to G-d. As a result, Jews go to the extreme: extreme religious or extremely secular. The spiritual light is so intense that it greatly inspires Jews to get closer to G-d or they go to the extreme to block this spiritual light and become vehemently secular.

A peel or a separation is a Klipa. It is something that creates a barrier from the inside to the outside. In the world of Kabala, Klipa is negative concept, since it can distance us from G-d and our ultimate purpose in this world. Klippos in good in the sense that they give us free will to choose good over evil and thus we can have the possibility of reward and punishment.

In addition, Klippos create Hester Panim, hiding G-d’s face, or spiritual distance from G-d. Thus, klippos can make someone evil over good. This is a result of a spiritual reality where there is a barrier between  G-d and man. A Torah observant Jew wants to get rid of any and all klippos possible. We can see Klippos in people who act un-godly. 0

Our relationship with G-d is dependent on our connection to the Land of Israel (Shaar HaGilgulim). Upon entering Eretz Yisrael (Aliyah), one is divested of his Klippos.

In the USA there is a greater drive for materialism which makes greater Klippos – or separation from G-d. Therefore, when a Jew with many klippos is exposed to Eretz Yisrael, he may be sensitized and feel compelled to stay away from the clear spiritual realty here.

10) Where is the land of the living ארץ החיים located?

Eretz Yisrael is referred to in Tanach as the land of the living. Here is where we actually fulfill our life’s potential in this world. Living in Galus is just practice until we are worthy to live in Israel.

In addition, the future event of revival of the dead תחיית המתים  will ONLY occur in Eretz Yisrael. ONLY those who are Tzadikim buried in Chutz La’aretz with be worthy of coming back to life 40 after the revival event in Israel. These Tzadikim will have their bodies roll all the way to Israel and then sprout to a new life from the ground in Israel.

11) Why is there Tuma טומאה, spiritual impurity and Secular Jews in Eretz Yisrael?

The Land of Israel is Holy . קדוש  The spiritual reality of Klipos  קליפות  do not have a portion in the Land of Israel. Chutz La’aretz has intrinsic impurity. For example, according to Jewish Law, Cohanim are not allowed to leave Israel.  Since Chutz La’Aretz (USA) has the same spiritual impurity as that of a cemetery. In contrast, Eretz Yisrael does not have intrinsic impurity, it is holy.

Others can gain forgiveness through Teshuva and Torah study here in Israel. Thus, all of those who live here on some level, are considered a Tzadik. If this is not true, then The Land of Israel would physically “spit” them out (Vayikra 18) and send them to the Galus of Chutz La’Aretz.

You shall not defile yourselves by any of these things, for the nations, whom I am sending away from before you, have defiled themselves with all these things. And the land became defiled, and I visited its sin upon it, and the land vomited out its inhabitants. But as for you, you shall observe My statutes and My ordinances, and you shall not do like any of these abominations neither the native, nor the stranger who sojourns among you. For the people of the land who preceded you, did all of these abominations, and the land became defiled. And let the land not vomit you out for having defiled it, as it vomited out the nation that preceded you (Vayikra 18:24-28).

About the Author
Arie E. Pelta, M.D., a Board Certified General and Colorectal Surgeon from the USA , made aliyah with his wife and 7 children in 2013. Received Rabbinical ordination in 1997. He is also a active Medical Corps Officer holding the rank of Captain in the IDF Reserves. Currently practicing in Laniado Hospital in Netanya; speciaizing in the surgical care of all problems of the colon, rectum and anus.
Related Topics
Related Posts
Comments