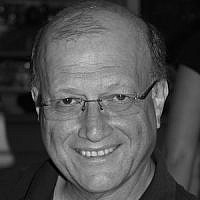 The Blogs
Chaim Feder
Apply for a Blog
Advertisement
Please note that the posts on The Blogs are contributed by third parties. The opinions, facts and any media content in them are presented solely by the authors, and neither The Times of Israel nor its partners assume any responsibility for them. Please contact us in case of abuse. In case of abuse,
Report this post.

Just before the Yamim Nora’im, my brother Avraham and I had one of our ongoing, spontaneous, ‘how are you’, talks. We generally avoid certain topics. While we’re both social democrats, we’re both ‘card-carrying’ members of the Zionist family since childhood, and we’ve both lived in Israel for many decades (he in Jerusalem and I, now, in Modi’in), we happen to disagree about where we should be heading regarding West Bank/Judea Samaria…and about the present President of the U.S. So be it.

Often our brotherly banter turns quite existential, usually in reflections about family, health, life decisions made and that yet need to be made. Avraham’s a rabbi and chazzan and I’m a Jewish educator and our shared thoughts are often studded with references to liturgy, to Tanach, to literature. But as brothers we found ourselves talking about, among other matters, films that we love and had seen in our more formative years (that’s 50-60+ years ago) and that we keep returning to.

Avraham reminded me of a scene in the Sam Spiegel/David Lean film The Bridge on the River Kwai (1957). A British army company, commanded by Col. Nicholson, is held in brutal captivity at a Japanese work camp commanded by Col. Saitu. Its assignment is to support the building of a strategic bridge that will enable the Japanese to transfer its troops more quickly and decisively to the front at which British troops are fighting the Japanese. The bridge is built only after Nicholson establishes that only superior British engineering skills and discipline will get the job done. As the work progresses Nicholson marvels at the possibility that ‘his’ bridge may stand for as long as 600 years. The bridge is completed and on time.

Towards the end of the film, he reflects on his achievement of having built a bridge in a situation of brutal captivity. In this scene he takes stock of his life:

Nicholson: “I’ve been thinking. Tomorrow will be 28 years to the day that I’ve been in the service. 28 years in peace and war. I suppose I haven’t been at home for more than 10 months in all that time. Still, it’s been a good life. I loved India. I wouldn’t have had it any other way… But there are times when suddenly you realize you’re nearer the end than the beginning. You wonder, you ask yourself, what the sum total of your life represents, what difference your being there at any time made to anything, or any difference at all really, particularly in comparison with other men’s careers. I don’t know whether that kind of thinking is very healthy, but I must admit I’ve had some thoughts along these lines from time to time. But tonight … tonight … “.

Avraham is 16 years older than I am. We grew up in different generations. Yet today, as quite seasoned adults, we both identify – me less and he more – to insights in Nicholson’s soliloquy, very sharply so in Elul.

I then sent a note back to Avraham, in part of which I said this:
Spiegel/Lean, came together again to make an equal film, at the very least. Lawrence of Arabia (1962) is, in its epic proportions, its depth of thought, its balance of visual and verbal poetry, an even greater artistic achievement. It’s by far my favorite film.

Lawrence, a British serving officer at military headquarters in Cairo during WWI, is seconded to the Foreign Ministry’s Arab bureau. His job is to assess, at first-hand, the intentions of Bedouin tribes staging an uprising against the Ottoman Turks in southern Arabia. His knowledge of Arab ways, his brilliance in military strategy and tactics, his audacity and his exhibitionism, quickly establish Lawrence as leader of the Arab revolt. Over time, his genius and eccentricities, while driving him to strategic victories, critically at Aqaba and finally of Damascus, also challenge his identity to its depths and drive him to the edge of madness. Finally, he and his Arab army, having captured Damascus, quickly prove incapable of organizing politically and even of maintaining Damascus’s basic utilities. The tribal leaders disperse, and Lawrence remains with himself, alone.

In the film’s final scene, Lawrence, a British serving officer after all, is being driven off from Allenby’s headquarters in Egypt. He is a shattered man: his achievements are broken, incomplete, and are being usurped by others, and with new British conscripts being driven in, Bedouin passing by on their camels, a motorcyclist speeding past him, sand is blown on his tortured face from them all.

Lawrence is portrayed as one who challenges the elements, human nature, human culture, his own identity. Recognizing, but not accepting, ‘what is’, he struggles with them all, modifying and moving forward what he could, he is then stripped of victories and accomplishments, his visions are overwhelmed, his sanity is exploded and his own identity is fragmented. He strived to be god and is reduced to very human size, indeed to one who is himself blown and shaped by powers far beyond him, as is sand.

Such are some are some of the triggers for ‘how are you’ reflections between Avraham and me as we entered the Yamim Noraim in Chodesh Elul.

About the Author
Chaim Feder is an educator specializing in global Jewish-Zionist education for decades as a professional and as a volunteer. He came on aliyah in 1977. Chaim is married to Irith, they live in Modi'in and their three children, spouses and six grandchildren, all live within 20 minutes driving distance.
Related Topics
Related Posts
Chaim Feder
Comments