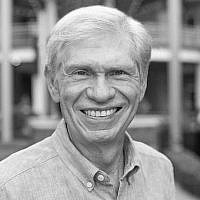 The Blogs
Stuart Gershon
Apply for a Blog
Please note that the posts on The Blogs are contributed by third parties. The opinions, facts and any media content in them are presented solely by the authors, and neither The Times of Israel nor its partners assume any responsibility for them. Please contact us in case of abuse. In case of abuse,
Report this post.

I have always respected Ben & Jerry’s for its intention to use the ice cream business to make a better world – to work for tikkun olam. Its core values are commendable:“to advance human rights and dignity, support social and economic justice for historically marginalized communities, and protect and restore the Earth’s natural systems.”

Ben & Jerry’s claims its decision to boycott “Occupied Palestinian Territory” (i.e., Israeli settlements in the West Bank and Israeli neighborhoods in East Jerusalem including the Jewish Quarter) was necessary to be “consistent” with its core values.

But when the independent board of Ben & Jerry’s embraced a boycott policy and an anti-Israel rhetoric advanced by the BDS (Boycott, Divestment, and Sanctions) Movement – a narrative that considers even Judaism’s holiest site, the Western Wall, to be “Occupied Palestinian Territory” — Ben & Jerry’s made a decision that was completely inconsistent with its core values of justice, human rights, and peace.

The BDS Movement opposes the two-state solution to the Israeli-Palestinian conflict. It does not just reject Israeli settlements in the West Bank. It calls for the destruction of Israel altogether. How is BDS’ goal to eliminate Israel compatible with Ben & Jerry’s commitment to support “nonviolent ways to achieve peace and justice”? Where is Ben & Jerry’s progressive commitment to honor the rights of the Israeli people to national self-determination?

The BDS Movement opposes the Abraham Accords and rejects any Palestinian normalization, negotiation, or engagement with Israel. How is BDS’ total rejection of coexistence consistent with Ben and Jerry’s core value to “honor the rights of all people to live with “liberty (and) security”? Where is Ben & Jerry’s progressive commitment to promote peace and reconciliation between Israelis and Palestinians?

These three examples manifestly demonstrate that Ben & Jerry’s action was worse than inconsistent with its values. Ben & Jerry’s actually violated its own core values. Ben & Jerry’s was so intimidated by social media attacks that it was insufficiently sympathetic to the Palestinian cause during the Israel-Hamas conflict last May that it completely lost touch with its own progressive principles of peace, nonviolence, and reconciliation. Shamed into believing that it was complicit in injustice, Ben & Jerry’s capitulated to the onslaught of online criticism from pro-BDS activists and to members of its own independent board who hold anti-Israel biases.

Rather than adopt the BDS Movement’s biased and hate-filled narrative about the Israeli-Palestinian conflict, Ben & Jerry’s could have used its considerable prestige in progressive circles to recognize, support, and strengthen the many Israelis and Palestinians who reject hate, abhor violence, and strive to make real a future for both peoples anchored in justice, equality, and peace. Now that would have been an action most consistent with Ben & Jerry’s values.