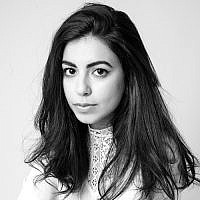 The Blogs
Shirley Seni Amiti
Apply for a Blog
Advertisement
Please note that the posts on The Blogs are contributed by third parties. The opinions, facts and any media content in them are presented solely by the authors, and neither The Times of Israel nor its partners assume any responsibility for them. Please contact us in case of abuse. In case of abuse,
Report this post.

I walked down a street one day, one of those streets they warn you about.

I walked down the street, running last minute errands for the holidays when I suddenly heard a cry that grew louder with every step. A young boy was muttering words I didn’t understand, eyebrows frowned, agitated. I didn’t know what he was saying; still, his language was clear from the sound of his unforgiving tone. His speech and gestures translated into aggressiveness and he was noticeably swearing or saying something unpleasant. Soon, I heard other children utter the same words, and adults forcefully stepped in. Older men were shouting and racketing down the streets, pointing fingers. I looked up, to the right and left, seeking to understand what the tumult was about when I noticed a man in a green uniform accompanied by a younger woman.

His expression outlined that of an uncomfortable grin. He continued walking as flustered faces furiously shouted at him. The disdain and violence painted on their faces caught me entirely off-guard. I suddenly felt as though I was in a dream, a cloudy, muted dream where I heard and felt; yet it didn’t seem real. It was all too much for my nerves. I stopped near the closest store and broke down in tears.

There are truly no words meaningful enough to express the torment and pain I felt in that instant. “He’s one of us, he protects us, they protect us day and night! He doesn’t deserve to be met with such baseless hatred; he’s just a boy! They give their lives to protect our country! Where is the gratitude?” My mind echoed with a river of questions I couldn’t answer. I felt the throbbing in my throat and a roar within. This is an attack; it is wrong, so wrong I thought to myself. Yet I felt powerless, immobilized, and significantly small in the midst of it all. “You did nothing” whispered a voice inside and the guilt rose. I watched and trembled with angst, nonetheless silence was all I spoke. What could I do, what could I say?

You see, it wasn’t just about this man who happened to be in the wrong place at the wrong time, though I would argue that he is in in his country, in his home, and it’s just about time at that! It was about what he represents, or perhaps what his uniform represents. In his famous speech “Plaidoyer pour ma terre”, Herbert Pagani upheld “Je me defends donc je suis”, “I defend myself, therefore I am/I exist”. As Jews, our existence solely stands on the pillars of defense. Without it, we would be long gone. Without it, we do not exist. It is everything we prayed and cried for: To be. Next year in Jerusalem! Together. As one.

The soldier is me, it’s you and it’s all of us who cry for unison across the world. And The uniform is a dream, a necessity, symbolizing our right to be, our right to stand on our two feet. At last. Upon the injustice and humiliation of a solider, I felt the plead and the cry of a thousand people, the pain of an entire body because we are one. And when one of us hurts the other, we all feel it to the core. How can I stand idly by the blood of my brother? Baseless hatred caused our very own destruction, and there I was witnessing it first hand. Why? I can’t help but be reminded of Frederick Douglass’s words written on a street wall in Jerusalem, “It is easier to build strong children, than to repair broken men”. Hatred soared from the folds of my unconscious; still, I knew that my raw aching would only feed in to the fire that is already burning. “If you hate, you’re no better than them” said the voice inside. I knew it was right. I also know what I saw and experienced was wrong. One thing is for sure, if I can say something about it now, I must.

I asked myself through the chaos, the hurried paces and heads looking down, was anyone going to step in? But more importantly, the question begs: why was I waiting for someone in the crowd to say something? Why do we hope for others to take the lead when we feel something is critically wrong? More often than we realize, we are given the chance to be the voice we desperately long to hear. We are given the opportunity to lead the dance that is life.