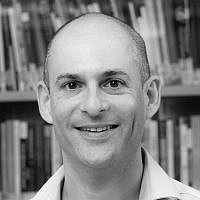 The Blogs
Gilad Malach
Apply for a Blog
Advertisement
Please note that the posts on The Blogs are contributed by third parties. The opinions, facts and any media content in them are presented solely by the authors, and neither The Times of Israel nor its partners assume any responsibility for them. Please contact us in case of abuse. In case of abuse,
Report this post.

The ultra-Orthodox live in extremely crowed housing conditions, and so are at much higher risk for contagion.  For weeks now, the authorities believed that the community would respect the social-distancing and isolation orders. It didn’t. Accordingly, a practical proposal to deal with the situation is presented below.

The spread of the virus in ultra-Orthodox neighborhoods is cause for grave concern. In the United States, the number of confirmed cases has spiraled into the thousands, with a mass outbreak in Brooklyn — an area with a large ultra-Orthodox population. In Israel, the predominantly ultra-Orthodox city of Bnei Brak ranks second on the scale of  localities, ranked by the numbers of residents infected by the virus. According to current data provided by the Ministry of Health, at least 40 percent of the patients are members of the ultra-Orthodox community.  The ultra-Orthodox paid little attention to the regulations issued by the ministry, and did not adhere to them. At the same time, various government agencies failed to adapt their actions to the way the community conducts itself and to its culture, and so — had only limited influence.

On the surface, the unique social and cultural attributes of the ultra-Orthodox should produce tremendous success in preventing the spread of the coronavirus: their almost total obedience to rabbinical authority; the extensive network of mutual aid organizations (free-loan societies and charitable nonprofits) of unparalleled scope; and the extremely effective community mechanisms for disseminating information (broadside posters, synagogue and Hasidic communities, special WhatsApp groups , and ultra-Orthodox websites). The fact that the  ultra-Orthodox community is very young, with only 3% aged 65 and over, would seem to predict lower rates of infection.

But all of this is the case only if the authorities act in an appropriate manner. If they do not, ultra-Orthodox society becomes even more vulnerable. The very same characteristics that could block the spread of the virus are those which have accelerated the contagion:

How Can We Change Course?

Until the last few days, the ultra-Orthodox went about their lives, generally indifferent about the need to take precautions against the epidemic. Their awareness of the danger was quite low, and many of their rabbis did not acknowledge the threat. Some on the ultra-Orthodox street saw the emergency regulations as a government edict that was not to be taken seriously.

Two factors: the spread of the disease, and direct communication with ultra-Orthodox rabbis and community leadership led to a change of course. Today, the community’s compliance with the restrictions is dramatically higher than before, but there is still a ways to go to achieve full compliance. In order to cope with the challenges we are facing, a number of additional steps are required.

1.    Setting up a government team to communicate with the rabbis. There must be a formal designation of who will be communicating with decision-makers in the ultra-Orthodox community. This is essential: When the rabbis finally recognized the enormity of the crisis, they issued halakhic rulings forbidding prayers in synagogues (and now — even in open spaces).

2.    Special preparations for Passover. The rabbis must immediately issue clear instructions on preparations for Passover (buying food, making pots kosher, burning the hametz, gatherings for the Seder etc. this cannot be delayed until the last minute. If necessary, special Passover kits should be distributed door-to-door, with the proper precautions, via the Home Front Command or food-assistance organizations.

3.    Developing channels of communication with the ultra-Orthodox public at large. The Health Ministry should take steps to support the daily distribution of up-to-date information to e municipal hotlines in ultra-Orthodox towns, which have the means to pass it on to the residents. There is also a need for an information campaign specifically targeted to the ultra-Orthodox, by means of the channels relevant to the community, featuring prominent medical personnel affiliated with it. In addition, the police presence in ultra-Orthodox neighborhoods must be beefed up, with fines imposed especially on the extremist factions that continue to disregard the directives. As the spread of the virus continues, indeed the government appears to be blocking all the entrances to Bnei Brak – the largest Haredi city in Israel.

4.    Setting up coronavirus testing stations in ultra-Orthodox towns. There must  be a virus-testing network, designated  specifically for the ultra-Orthodox (most of whom do not have cars, preventing them from getting to the Magen David Adom centers), along with  special arrangements for those required to go into quarantine. Quarantine at home is almost impossible for the ultra-Orthodox, but isolation facilities for them must meet their special requirements (with regard to kashrut and other matters).

There’s No More Time to Lose

The coronavirus crisis has created unprecedented challenges and dangers for public health, the economy, for daily life in the ultra-Orthodox community and for Israeli society overall. If we fail to find ways to cooperate with the ultra-Orthodox, they and the rest of us will pay a very heavy price. On the other hand, it is precisely this emergency that can raise our awareness of our common destiny; the virus does not distinguish between the ultra-Orthodox and those who are not. This crisis presents us with an opportunity to break down the walls, to cooperate, and emerge — stronger and more resilient.

Leehe Friedman contributed to this article. She is Adjunct Professor and Manager of the Honors Track in Strategy and Decision Making at the Interdisciplinary Center Herzliya.

About the Author
Dr. Gilad Malach is the director of the Ultra-Orthodox Society Program at the Israel Democracy Institute.
Related Topics
Related Posts
Gilad Malach
Comments