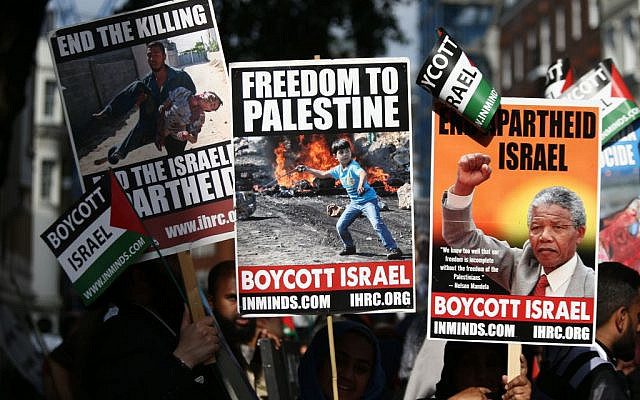 The so-called “conflation” of anti-Zionism (which I am hereby renaming “anti-Israelism”) and antisemitism has been widely discussed. We all understand how a fervent and implacable antipathy to Israel was fed by antisemitic tropes (and perhaps by latent antisemitism) and segued into antisemitism which was allowed to flourish in the Labour Party (and which, based on comments during the current Leadership contest, shows little sign of abating).

But what is less clear is how this fervent and implacable anti-Israelism arose in the first place. Those of us who have studied the phenomenon of anti-Israelism over many years know that it is based on a series of lies, notably one Big Lie upon which many more lies have been built. Or, perhaps it is simply a huge omission that amounts to a Big Lie.

That huge omission is the key historical fact that in 1948 under the Partition Plan the Palestinian Arabs would have had their own state in more than two-thirds of Palestine. As we know, and as records prove, this was rejected by Palestinian leaders who wanted (and expected) the whole of Palestine. That makes them, not Israel, primarily responsible for the creation of the refugee crisis.

But most of the left and quite a few Jews believe Israel is to blame for this tragedy.

The lie that Israel dispossessed the Palestinians of their homeland has been repeated so often and is perceived as “the truth” by so many (including some Jews) that it is almost impossible to challenge without seeming pedantic, nerdy or defensive.

How did this lie mutate into the “orthodoxy” that Israel is guilty (and by extension Jews are guilty) of a terrible travesty? How did the fake narrative that claims Israel “drove out” the Palestinians take root?

Perhaps I should say here, that despite categorically rejecting their version of events I have huge sympathy for the Palestinian people and the cynical way their plight has been exploited.

My explanation for how it took root sounds (even to me) alarmingly like a conspiracy theory. But let’s look at the facts. To do so, we need to step aboard a time machine and return to the mid-1970s when the Arab nations had just lost their fourth war against Israel. They had been on the losing side in 1948, 1956, 1967 and in 1973, despite on that last occasion having launched a surprise attack on Yom Kippur. I think we can safely assume the leaders of the Arab nations were deeply unhappy.

The next fact is that in the mid-1970s there was a powerful, well-funded, geo-political grouping known as The Arab League. It still exists today and has 22 members. When talking about the Arab League in this context, it is important to keep in mind when and why it was really created. It was created ostensibly as “a regional organisation for the promotion of Arab interests.” But the timing of its creation (March  1945) and its composition (its six founder members included Egypt, Syria, Lebanon, Iraq and “Transjordan”) possibly give some clue to its actual objective.  Its sixth member was Saudi Arabia. Though not directly engaged in the ongoing attempts to crush the then-unborn Jewish state, it held the purse strings. In addition to knowing that the Arab League’s wealth came from oil revenues (at an all-time high in the 1970s), we know its power derived from the fact that most of its member-states were allies of the Soviet Union throughout the Cold-War.

Moving from the firmly-rooted reality of a wealthy and powerful Arab League that was seriously displeased at its failure to defeat Israel militarily, we enter the realm of speculation based on rumours and gossip which swirled around in the 1970s. Rumours hinted that the Arab League was looking for non-military options. These may have included a PR/propaganda campaign or a Campus War designed to change perceptions about Israel, still seen then as the “darling” of the Left. Indeed, one of the most delicious rumours claimed that a top Madison Avenue PR firm had been asked to create a campaign, but unless all its employees were forced to sign stringent NDAs, surely that would have leaked by now…

Naturally any campaign (devised by whoever) would focus on The Palestinians who had been kept in wretched conditions since 1948 for their value as a propaganda tool and political weapon. But until the 1970s, only a few devoted Arabists claimed that Israel was responsible for the Palestinian tragedy.

Obviously, those who have drunk the Kool-Aid will claim it was because the “truth” came out. But I have an alternative suggestion which is that a fake narrative was unleashed on the world, starting with Britain. This narrative carefully blended lies, half-truths and omissions (notably the omission that the Palestinians could have had a state in 1948 but turned it down). This toxic, fake narrative, containing just enough truth to make it plausible, was used to turn Israel from darling and “underdog”, into “aggressor,” “pariah” and responsible for the Palestinian tragedy.

The masterstroke in this “campaign” was to flood British university campuses (and later university campuses across Europe) with angry young Moslem men (in the 1970s it was always men) to distribute Palestinian propaganda material. By starting on campuses, they were able to not only infect the generation of students hearing these lies, but those students would go on to hold influential posts after graduating. (This was the ‘70s, remember, when a university degree invariably led to a successful career.) And in their post, (with luck on a news desk or in a TV studio,) their sympathy to the cause would be helpful in spreading the fake narrative.

At the time Israel had no expertise in fighting back in a propaganda/PR war and, ironically, in light of a popular antisemites trope that Israel “interferes in British political life,” Israel would have seen it as a problem for the Anglo-Jewish community and declined to get involved. And the Anglo-Jewish community dismissed the campus campaign as, in essence, “a few hot-heads running around.” That assessment was about as accurate as the idea that Japanese Knotweed is “just a harmless bit of foliage.” In fact, the analogy is particularly apt, because the lies of the Palestinian narrative are now so deeply embedded (even among some Jews) and so widespread that they are almost as impossible to uproot as Japanese Knotweed.

Perhaps the notion of a well-funded “campaign” is as mad as most conspiracy theories. Perhaps it was just lucky timing by Palestinian sympathisers arriving on campuses with their identical fake narratives at a time when we weren’t able to stem the flood-tide of lies. But, my goodness, the lies they told were certainly effective at poisoning minds…