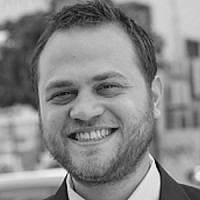 The Blogs
Alon Rajic
Apply for a Blog
Advertisement
Please note that the posts on The Blogs are contributed by third parties. The opinions, facts and any media content in them are presented solely by the authors, and neither The Times of Israel nor its partners assume any responsibility for them. Please contact us in case of abuse. In case of abuse,
Report this post.

Due to my line of work, as the Managing Director of Finofin — a company that builds, operates and promotes websites, I spend a lot of my time online. My company operates in several different markets and locales abroad so a sizable portion of my time is spent in British, American and Australian websites of all sorts — from personal blogs, through mainstream media, local and regional newspapers, governmental websites, social media and forums, to just about everything the internet has to offer locally.

Prior to my current role, I supervised over a network of 2,000 popular websites in 15 different languages; I spent more than 7 years building and overseeing that vast array of websites and while doing that I must have visited millions of different sites that “foreigners” would hardly ever visit.

These many years of wandering and strolling through the most forgotten paths of the internet, and observing user behavior through the websites I managed, have lead me to a series of observations on the subtle differences between different nations when it comes to internet preferences. Although it is said that the internet is the ultimate gateway towards a truly globalized world, it doesn’t necessarily mean that people in different regions of the world don’t have different desires, needs, and flavors.

In other words, the cultural differences show online as well, as expected.

When it comes to regional websites, niche magazines, or less-frequented newspapers, the substantial socioeconomic gaps between rich and poor are definitely visible. Have look at this random official police department website to see what I mean.

In terms of user behavior, Americans do love to buy. They are relatively quick to decide, and fairly compliant with information provided to them. Websites capitalize on that and like to direct relevant audiences directly to buy without much presell. Paywalls are also a common practice among the larger newspapers and magazines.

Their northern neighbor, Canada, doesn’t share the same mentality precisely. Although the design preferences and practices are somewhat similar between the two nations, I often found that Canadian audience likes to spend more time reading and appreciates lengthier and more comprehensive content. Canadians  are also a tad more critical and show favoritism to less commercial and more balanced type of content content than its American peer.

Overseas, in the UK, the audience is often even more critical than it is in Canada and sites are more upfront about what they’re selling, and they rarely put on paywalls. Every single websites actively seeks your confirmation for cookies with a visible bar. The harsher regulation relating to privacy disclosure and policies of course plays a big role in that, but it’s not only that. Paywalls are not as popular, and even large newspapers like the Guardian are politely asking you to donate to quality journalism by setting up a paid account rather than forcing you into doing it in the fashion Forbes does.

The average British client is a lot more keen to test several providers for each service, and takes information with a grain of salt. They are much more likely to be browse through your websites or ask questions before they make the buying decision. On the other hand, in some areas, their expectations may be lower than those of the American buyers (pricing and shipping are areas which they may be more flexible on).

Hence, based on my experience, many UK websites are a lot more detailed and provide more value to their users. Not necessarily because they want to go down this route, but simply because this is what the local market expects them to do.

The Australian market is different than either of those market in one main thing – it’s incredibly smaller. Not only that Australia’s population is about a third of the population in the UK, or less than 10% of the USA’s, it’s also a somewhat underdeveloped market.

That leads to a unique situation in which essentially one corporation, namely News Corp Australia, dominates the online news with a multitude of websites and newspapers. It also leads to a situation in which most of Google Australia’s search results lead to non-Australian websites (or, international websites that have created an Australian version of their website which is essentially identical to the American version).

Hence, it’s hard to say that there’s a developed internet culture in Australia or that you can find specific characteristics relating to an “Aussie behavior” online. Needless to say, in smaller English speaking markets like New Zealand or South Africa this situation occurs with a larger magnitude.

Greece is all over the place. The bigger sites are rarely up to par with bigger websites outside of Greece in terms of design, and the smaller sites often show little regard to user experience. It is not just the use of outdated technologies or design conceptions, it’s about websites which are genuinely hard to read and understand even if you speak the language. It makes sense, of course, for a nation of 12m people with only slightly more than 60% of the population connected to the internet, suffering through a debt crisis for the past 9 years.

With that being said, there are more than 3m people there who shop online at least once a year and future prospects are that this number will continue increasing. As the country’s situation will improve, I predict that the quality of websites offered to local users will improve.

In Scandinavia, the markets are also somewhat small and quite unanimous in design. There isn’t seem to be a lot of innovation when it comes to unique tools or groundbreaking designs, but it seems like the Scandinavian users are fairly satisfied with this situation. These designs are generally symmetrical, clean, and easy to navigate.

In terms of user behavior, the Fins seem to be more critical of others. They appreciate in-depth, quality, information and often devote enough of their time to read it through. Swedes, Danes, and Norwegians tend to demonstrate a lighter approach with less time spent reading. Online shopping is absolutely brimming with promise in these 3 countries as well which has more than doubled over the past 5 years.

Japan is a different story altogether, in more than one way. Trying to explain what goes on there is simply impossible to do. This is just a standard commercial website. Pink colors? check. A hundred banners on the sidebar? check. 1,000 links to click on? check. It is obviously working for them, being the 4th largest country in e-commerce worldwide, but I could not comment on something I fail to understand.

Last but not least on this is Israel. Being a startup nation you would have probably expected me to say Israeli websites are all that, but they actually aren’t. In my opinion, Israeli website designs are somewhat outdated, and commonly the interface is buggy. With that being said, the comparison is made against similarly populated nations, then Israel is definitely up to par and more.

As with other smaller markets, the Israeli market is centralized and there are fewer websites receiving the majority of traffic. What perhaps separates the Israeli market in that regard is that, sadly, it appears that the Israeli mainstream media is more receptive to blatant advertising hidden as newsworthy material, and isn’t as concerned with the consequences of working with advertisers that large-scale websites abroad would have rejected. Read any popular Israeli finance magazine and get at least three offers to trade like the best of them. These trading classes are the ones who pumped scammer brokers like Short Trade.

The above relates to three common characteristics of the Israeli audience – hate paying for content (pushing publishers to seek more aggressive advertising routes), looser regulation (fair disclosure laws), and the very fact that culturally there is perhaps a lesser sense of accountability.

This has been a short overview with specific insights about specific countries, and I may follow with a part 2 soon. Would be happy to hear your inputs on the comment section below.

About the Author
Alon Rajic is the Managing Director of Fintech firm Finofin LTD. Before that, he worked for XLMedia PLC as the Head of SEO, and helped the company grow from seed stage to a market cap of $200m.
Related Topics
Related Posts
Comments