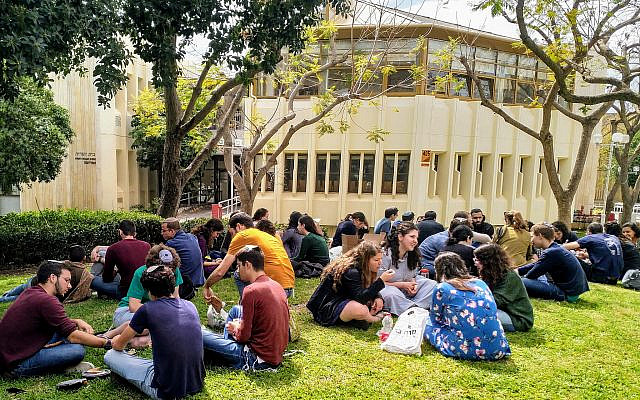 A meeting of student activists at Bar Ilan University who are affiliated with Ne'emanei Torah Va’Avodah's outreach on college campuses. NTA student groups at all six Israeli universities engage with the campus community, often setting up educational events on topics of religion and state, (Spring, 2019).

So here’s some food for thought. Israeli society is like a pizza. Each sector of our diverse population constitutes a slice. In theory, we can move forward on social issues when there is public consensus, where the tips of each sector meet in the center and all the toppings gather.

Shmuel Shattach shared that oft-used description by the journalist Bambi Sheleg with me back in 2008 when he took over as director of Ne’emanei Torah Va’Avodah (NTA). He uses it to describe not only Israel’s multicultural society, but also key parts of NTA’s strategy. Since its establishment in 1978, NTA has sought to promote a more progressive and inclusive approach to religion.

NTA focuses primarily on the slice of pizza composed of the Modern Orthodox, also known as the Religious Zionists. Sitting between the Ultra-Orthodox community and the Jewish secular community, they can lean to either side. There are some Modern Orthodox, for instance, advocating for greater LGBT rights, thereby overlapping with many in the secular community. And at the same time, there are other Modern Orthodox arguing for boys and girls to be separated in classrooms at increasingly younger ages, which puts them much more in line with the Ultra-Orthodox.

In recent years, the numbers of religious women who have voluntarily enlisted in the army has grown exponentially. This newspaper article in Yediot Ahronot, Winter 2017, describes women proudly announcing their decision to join the army service despite another call from conservative religious leaders voicing their opposition. NTA youth activists helped to organize a petition and video of support during this time when women explained their positive experiences as army recruits.

Before we explore the work of NTA, it’s important to recognize a complication of the pizza reference. Even when there are many slices in favor of a policy change, it is still difficult to move forward on many social issues with overwhelming public support, such as civil marriage. More often than not, the roadblock comes from the Ultra-Orthodox community. Not only do they have growing political power that is entirely disproportionate to their piece of the pie, but because the country’s founders granted them a monopoly over religious affairs, the Ultra -Orthodox Chief Rabbinate exerts vast control over everything from life cycle events -like how we marry and where we bury our loved ones- to the availability of public transportation on Shabbat and the setting of daylight savings times.

Despite living here for decades, the entanglement of religion in government and politics still seems incredibly foreign to me. You see, I was raised on lots of pizza and countless rounds of the board game Monopoly, but I was also raised on the values of Conservative Judaism in America and the principle of the separation of church and state.

And that is why even though my slice of pizza might be different, I am grateful that NTA focuses on making religious institutions more open and democratic. Each time that I get especially exasperated, Schmuel is always willing to patiently explain to me the challenge they face to loosen the Ultra-Orthodox monopoly over religious affairs. 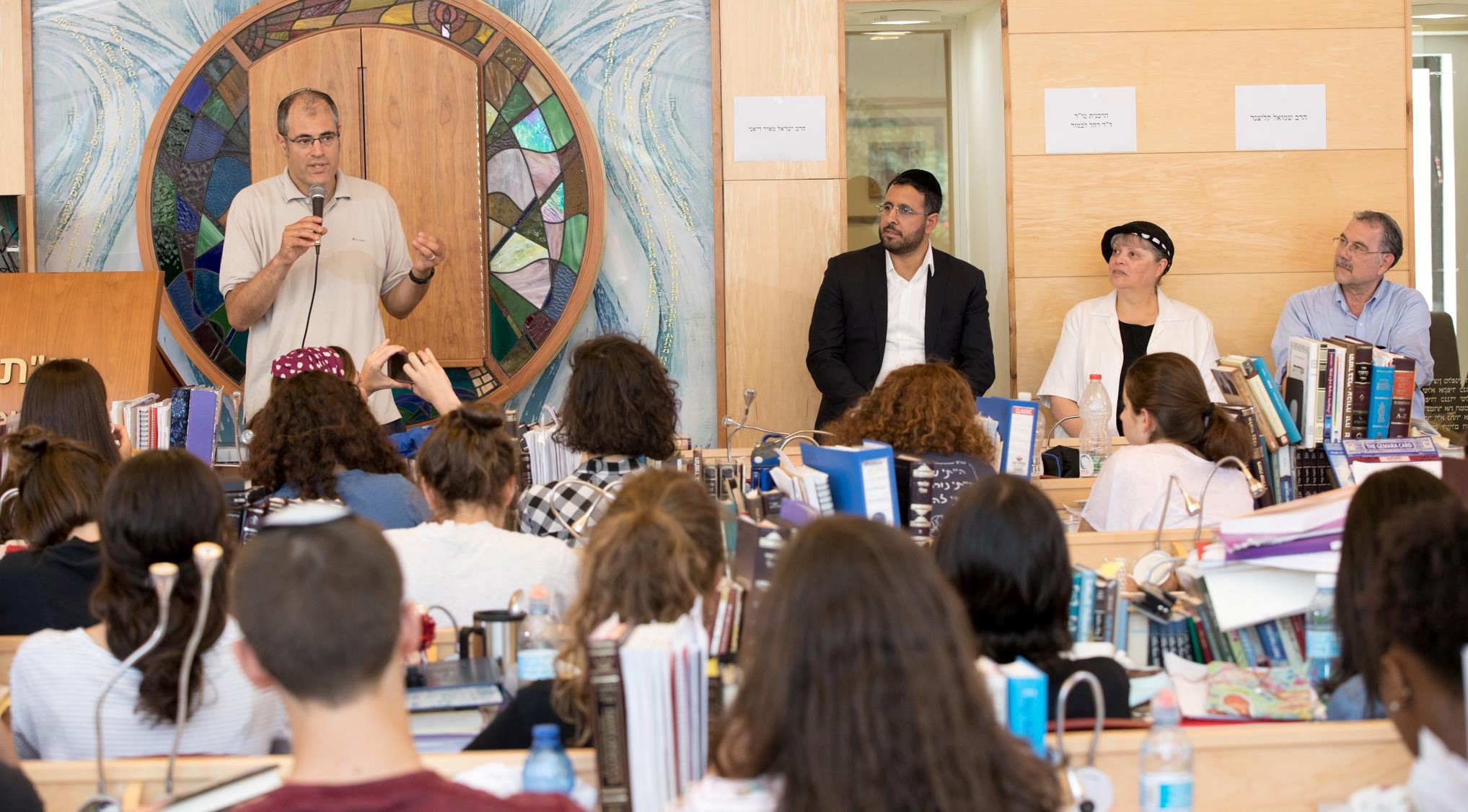 So what are just a few of the items on NTA’s crowded agenda?

How we eat:
Breaking the monopoly of kosher certification.
(There are now more options in a system that has been dogged by allegations of fraud, especially since the kosher inspectors are paid by the businesses seeking the needed certification.)

How we love:
Providing an option of civil marriage.
(Check out the booming business of honeymoon packages to Cyprus for Israeli couples and the fact that 20% of Israelis are coming up with ways to avoid marriages in religious ceremonies.)

How we educate:
Lobbying for school curricula to reflect tolerance and the study of the sciences and humanities.
(Ongoing vigilance is needed, when, for example, the Education Ministry has been quietly discouraging the teaching of evolution, and letting many religious schools refuse schoolbooks that include images of women.)

How we celebrate:
Advocating for boys and girls staying grouped together in everything from holiday celebrations to youth movements events.
(Free doughnuts at Hanukah time in the city square seems festive, but if girls and boys are then separated to ensure the ‘modesty’ of girls… Umm, not so much.)

How we pray:
Ensuring pluralistic access to the Western Wall.
(The unresolved controversy remains a great source of contention within the Jewish world, with such access essentially cut off by the Ultra-Orthodox control of the site.) 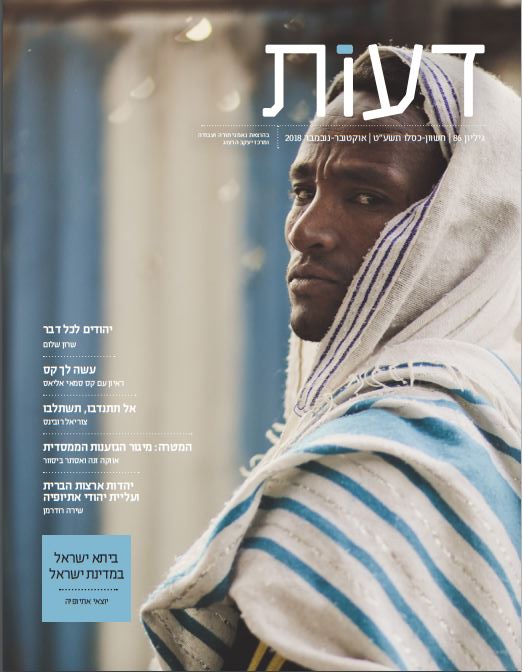 An issue of NTA’s journal De’ot, which discusses the Ethiopian community in Israel, and takes on topics that include racism in religious institutions (Winter, 2018). With contributors representing the entire spectrum of Religious Zionist thought, the NTA journal has sought to advance pluralism within the Orthodox community.

Much of NTA’s efforts are focused on pushing its own pizza slice towards democratic ideals and empowering moderate voices. It often does this by encouraging community and religious leaders to gently raise issues in digestible pieces, through the use of a journal, conferences, daily apps and social media. Using this approach, NTA has brought forward many topics once thought to be taboo.  This has included participation of women in synagogue services to welcoming LBGT members in the religious community, from confronting the prevalence of domestic violence to the handling of premarital relationships.

NTA also monitors extremism in its own school system – promoting the teaching of math, science and the humanities, pushing back against gender segregation and more. And you will always find NTA partnering with other organizations within its community like Kolech, Mavoi Satum, Tzohar, Bat Kol and Havrota, working to help tip the balance toward a more liberal minded approach.

As part of efforts to engage with youth, NTA holds Shabbat educational programs and monthly seminars to develop a community of students on college campuses. Shabbat seminar held in Fall, 2018.

Like any organization working in advocacy, NTA seeks to shape policy by using the court system and engaging with elected officials. It educates and offers alternatives on countless topics. Partnering with organizations sitting on a different pizza slice, like Israel Hofsheet, Itim, Israel Religious Action Center, and Israel Women’s Network, NTA has addressed a variety of issues including conversion protocol, open access to religious sites, public transit on Shabbat and the segregation of women in public institutions like the army and universities. 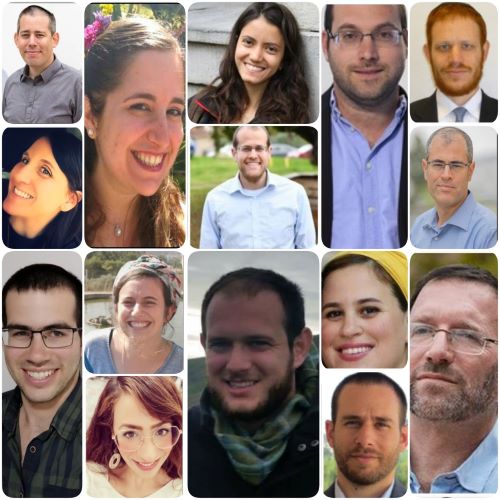 Some things to keep in mind as we go over NTA’s extensive agenda?  For starters, we have to be creative in how we measure success for organizations like NTA that are working to influence public opinion and policymaking. We need to consider lots of markers along the way. We have to appreciate that ‘it could be worse.’ And yes, patience is required. This kind of work has its ups and downs. Sometimes you pass ‘go’, and get a ‘get out of jail free’ card. Other times you pay a hefty fine or get stuck with a bad roll of the dice. There are fits and starts, progress and backlash.

The efforts of NTA and its partners show us that it is possible to change the trajectory, to influence over time.  Nothing is pre-ordained. But even as we feel the urgency of change, we need to recognize that it is not going to happen overnight. And knowing this, we still of course have to keep trying. But while doing so, we probably have time to grab a pizza and maybe even play a game or two of Monopoly.