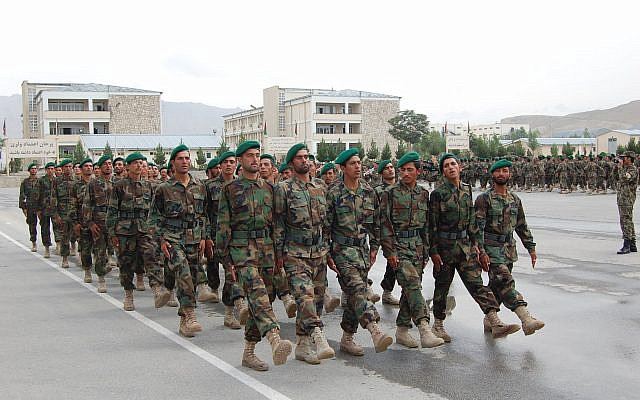 With chaos ensuing in Afghanistan after America’s withdrawal, many are analyzing what the collapse of Afghanistan means for various conflicts occurring throughout the globe, such as the Israeli-Palestinian conflict. While there are numerous potential implications for the Israeli-Palestinian conflict after the collapse in Afghanistan, one notable issue is how national security forces can run independently after receiving statehood.

Many within the right-wing camp in Israel who oppose a two-state solution with the Palestinians have warned that the Palestinian Authority (PA) would inevitably collapse and be overrun by non-state military actors no matter how well trained their security forces are. And with the recent collapse of the American-trained Afghan national security forces, one could use that as evidence to validate their argument.

For example, shortly after the Taliban swiftly took over Afghanistan, former Israeli Prime Minister Benjamin Netanyahu stated that he rejected then US Secretary of State John Kerry’s “Afghan model”, warning that the state would be overrun by non-state Islamist militias. He went on to write on his Facebook page: “An Islamist extremist regime conquered Afghanistan and will turn it into a terror state that will endanger the world. We will get an identical result if…we give parts of our homeland to the Palestinians. The Palestinians will not establish Singapore, they will establish a terror state in Judea and Samaria (West Bank), a short distance from Ben-Gurion Airport, Tel Aviv, Kfar Saba and Netanya.”

Indeed, with how the Afghan national security forces were easily overrun by the Taliban, one might assume that the same thing could happen to the Palestinian security forces in the event of a two-state solution.

Yet, despite these supposed parallels, the vast majority of retired Israeli military generals still advocate for a two-state solution and, in fact, cite the importance of preserving cooperation with the Palestinian security forces.

I recently had a conversation with (res.) US Army Officer Mike Duerr where he provided some insight on this issue. For some background, Duerr served for over a decade in the US military. He served in Afghanistan where he witnessed how his comrades trained the Afghan National Army and police. He also served at a Jordanian army base in Amman, Jordan where he participated in training the Palestinian national security forces.

After having a chance to witness and even participate in the training process of both national security forces, he said he observed a couple of differences between them. One was the difference in literacy rates. Indeed, literacy rates play a prominent role in the ability of a security force to function. For instance, if a lot of them cannot read or write, it affects their logistics, communication, training, and virtually every component a security force needs in order to work effectively. The literacy rate among Afghans is only 43 percent whereas the Palestinians have a literacy rate of 97 percent.

A more significant factor, though, that contributes to the instability within a national security force that Duerr observed is the role of tribalism. The various districts and provinces in Afghanistan have their own local security units and they tend to be dominated by a particular tribe or clan.​ Thus, many of the local units were more concerned with ensuring the well-being and safety of their local tribe rather than the broader Afghan nation. However, this made it easier for the Taliban to take power. Indeed, part of the reason why the Taliban were able to take over Afghanistan so easily was not just through military force, but also because they could sway the given local security force to work on their side by buying out their tribe.

Lastly, the Palestinian security forces will also continue to receive support from their Israeli and American counterparts. Indeed, even after Israel renounces sovereignty over the West Bank under a two-state agreement, they would still maintain robust security coordination with and support the Palestinian security forces. Moreover, the United States has supported and will continue to support such security cooperation between Israel and the PA through its US Security Coordinator office. Such a partnership did not exist in Afghanistan.

The Palestinian Authority and its security forces will absolutely need to be competent and stable in order to ensure Israel’s security under a two-state solution, but the notion that they will never be able to function independently is folly. A competent security force is not just a technical skill that any group of people can develop through adequate training, but there also seem to be certain structural, social, and cultural factors that may prevent the Palestinian security forces from being as prone to collapse as their Afghan counterparts were.

About the Author
Jonah Naghi is a Boston-based writer and the Vice Chair of Israel Policy Forum's IPF Atid Steering Committee in the city of Boston. A frequent commentator on Israeli-Palestinian and US-Israel affairs, Jonah has spent extensive time in the region and recently received his Masters in Social Work at Boston College and LCSW. All the views expressed are his own.
Related Topics
Related Posts
Comments