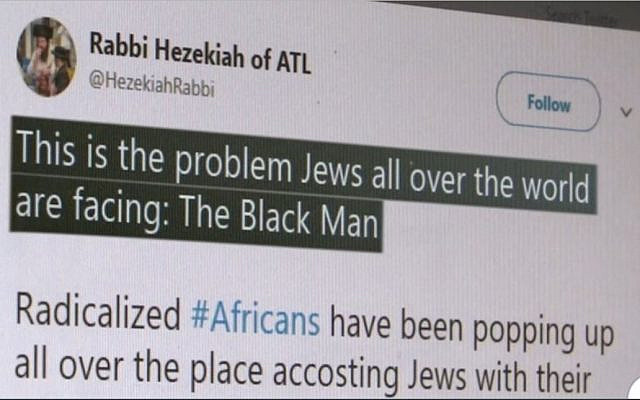 On shabbat, my rabbi told us how he had been interviewed by New York’s NBC News following the exposure of a fake Twitter account for a “Rabbi Hezekiah of ATL” fraudulently connected to our synagogue and spewing hateful things, all aimed at sowing discord between the Jewish and Black communities. The article points out what the social media companies are – and are not – doing about this disturbing activity, while providing another example of a fake account, one for a “David Rothstein” which used the photo of one of Israel’s Chief Rabbis. Both accounts had been discovered by Eric Feinberg who unsuccessfully tried to get Twitter and Facebook interested in his technology which finds hateful content.

When I shared this story online, people assumed that political powers or a particular party was behind this. But the truth may not be as clear cut.

In an NBC article from September another fake account, this one for an “Adam Greenblatt” which used a real person’s photo, was found to promote both anti-Israel and racially biased hate speech. Typically, anti-Israel speech might come from the far left while anti-Black messaging might come from the far right. The article found that behind this particular fake account was an anonymous call on “4chan, a fringe online messaging board frequented by white supremacists, [which] asked for people to create ‘a massive movement of fake Jewish profiles on Facebook, Twitter, etc.’.” Times of Israel also reported on many fake Jewish Twitter accounts which Tablet writer Yair Rosenberg discovered after the call went out on 4chan. How many 4chan followers answered the call?

Much more recently, CNN reported on an additional fake Jewish account spouting hate towards Blacks. In this case, “Elaine Goldschmidt,” used the photo of a Scottish comedian who herself had been targeted by those who are on 4chan. This fake Jewish account, too, tweeted very racist comments, trying to harm relations between the communities and towards the communities by others. As with the accounts spoofing my synagogue and “David Rothstein,” Twitter disregarded early requests to close the account. Meanwhile, “Elaine Goldschmidt” rang up likes and retweets and, according to CNN, 4chan users celebrated.

The relationship between Jewish and Black communities, both marginalized by so many, is one that ought to be strengthened. Trolls like these can inflict unwanted damage. The Forward’s recent piece, How to talk about Black anti-Semitism, does a thorough job of taking the reader through history, but more importantly, talks about what can be done to make it better. Hateful provocation, like that seen on Twitter at the bidding of 4chan users, is not only unhelpful, but could lead to violence, as my rabbi told NBC, “You just need one person suffering from mental illness or somebody who already has that hate in their heart to see this site and see our url and say ah, these are the people responsible and hold those views.”

The question is who is responsible and how do you reign haters in? NBC also reports on the Raise the Bar Act, a bill sponsored by Rep. Max Rose (D-Staten Island), which “would install non-profit referees to make periodic assessments of how effectively social media companies are removing terrorist content from their platforms.” If social media companies are not weighing outside technologies, are reacting slowly if at all, and are not yet subject to legislation that holds them responsible to monitor and measure (let alone to do anything), what can be done?

CNN reported this past summer that a federal judge ordered the editor of another hate-filled website, the Daily Stormer, to pay a Jewish woman $14 million dollars in damages due to the harassment that she and her family suffered from his site’s followers, after he called on them to carry out this harassment. The site is still in operation. Daily Stormer was not held responsible; its editor was. Can those on 4chan who are asking its users to create these fake Jewish accounts be identified and held responsible?

Or even better, can host servers be pressured not to host hate sites? After all, that is what happened after hate-filled 8chan, which had gone offline after the El Paso shooter was inspired by it, returned. This time, it rebranded itself as 8kun, but then its domain registrar then terminated that site due to breach of agreement. Can anything be similarly done to 4chan or Daily Stormer or the like?

I do not know the ins and outs of how the industry works, but perhaps internet service providers, domain registrars, webhosting companies or anyone else who enables sites to exist can follow suit? That is, sites which go beyond using free speech to spout hate to decidedly push users to take action ought to be made to see the value in creating standards of ethics or terms of agreement which prohibit such activity. Reputation, business ratings, fines, press – perhaps all of these could be used as carrots or sticks, I don’t know.

What I do know is that if we wait for social media companies to cancel accounts (or for the legislature to appoint “referees” to only measure hate), it will be too late. Damage will have already taken place. What else can be done now?