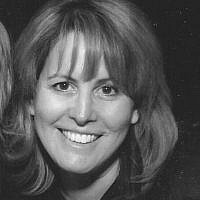 The Blogs
Sheryl Elias
Apply for a Blog
Advertisement
Please note that the posts on The Blogs are contributed by third parties. The opinions, facts and any media content in them are presented solely by the authors, and neither The Times of Israel nor its partners assume any responsibility for them. Please contact us in case of abuse. In case of abuse,
Report this post.

Our UK relatives (or “relations,” as they say in Britspeak) are asking about how we are doing this morning, more likely wondering if we are “mourning.”   If “we” is our immediate family, I can report back quickly.  If “we” is the United States of America, then my field report may take a bit longer.  I have tried to tell friends and family in Europe over the years that there is no one United States, that the person standing on the edge of a cornfield in Des Moines or sipping merlot in a gallery in Soho or just trying to get the through the day in a housing project housing in Chicago have very different opinions based in large part upon their very different life experiences.  The United States is a diverse, complex place.

I am neither proud nor comfortable with many/most of the concepts that have issued from Donald Trump’s mouth and I can only hope that now that the mudslinging of the campaign has concluded calmer, more sensible and sensitive minds will prevail.

But in order to move forward we have to try to understand how we got to this point.

If people are feeling a bit blurry this morning it is because, the lines have been blurred for some time and many, many people want clarity; they demanded it yesterday at the polls.

Voters want to see their concerns in mainstream media.

On November 9, 2016, the media professed shock with the election results, but, likely, many readers were just plain tired of picking up a newspaper and being told what to think.   Had the media concentrated on “reporting” they may have realized this a long time ago and they may not have been so shocked last night.

There are other potential sources of voter frustration that may have contributed to yesterday’s election:

There was Benghazi, the image of Ambassador J. Christopher Stevens, dazed and fearful, blood dripping from a gash on his forehead, allegedly physically and sexually tortured.   The very night of the attack, Secretary of State Hillary Clinton told the President of Egypt “We know the attack in Libya had nothing to do with the film and was a planned attack and not a protest.”  That same evening she told her daughter, Chelsea, the same thing.  Yet for weeks after the attack, Clinton stood before the American public, looked them in the eye and told them that the attack was a response to an allegedly anti-Muslim video produced by a small time West Coast filmmaker.

There was and is Syria.  In August 2013, horrifying photos emerged of a chemical attack on civilians in Syria.  Red line after red line was crossed, but the administration just kept coloring outside the lines.  The failure to stem the violence at each red line demarcation led to the catastrophic, international refugee crisis, with which we are now grappling.

Voters want to be confident in our judicial system.

There was Ferguson.  If a person violates another’s civil rights the perpetrator must be punished to the absolute fullest extent of the law. Moreover, our leaders must investigate and correct any flaws in the system that permit such violations, all the more so if the violator is a government official or police officer.  But punishment has to be meted out in the courts, not on the streets.  Voters needed to hear from our leaders, not only a forceful condemnation of those who violate others’ civil rights but also a strong, undiluted condemnation of those who take the law into their own hands and loot bakeries, convenience, liquor and sporting goods stores.

These are just a few sources of potential voter frustration. There are so many other reasons—relating to jobs, healthcare, immigrants, the environment, etc.—that a majority of voters went to the polls yesterday and gave a man who openly maligned women, minorities and even the disabled a key to the White House.

Some view last night as a bad dream.  Many in this country have been inhabiting a nightmare for a while; it did not just happen last night.  Last night was a response to various nightmares and this morning was a wake-up call.

We need to address the issues that have been dividing our country, together, cooperatively, and with respect for each other.

On November 9, 2016 and each day thereafter we have no choice but to move forward. To do so we need to:

President-elect Trump, you on board?

About the Author
Sheryl Elias is a mediator and arbitrator. She has coordinated various Israel-related student initiatives.
Comments