The Blogs
David Bernstein
Free speech proponent in the Jewish world
Apply for a Blog
Please note that the posts on The Blogs are contributed by third parties. The opinions, facts and any media content in them are presented solely by the authors, and neither The Times of Israel nor its partners assume any responsibility for them. Please contact us in case of abuse. In case of abuse,
Report this post.

What could possibly be wrong with a term as benevolent as “equity”?

Ibrahim X. Kendi defines the term in his best seller How to be an Antiracist. “Racial inequity is when two or more racial groups are not standing on approximately equal footing,” he asserts. Discrimination that produces equity, he assures, is anti-racist.

At first blush, this may sound like a fine approach to leveling the playing field. But once you think through the consequences and how radical a departure it is from our traditional understanding of the term, it becomes clear that not only is this view of equity bad for society, it’s potentially calamitous for the Jewish community. 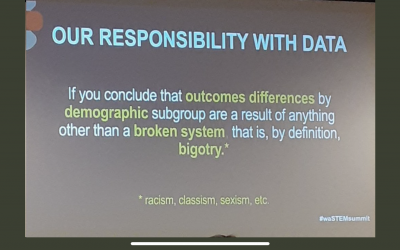 If you want examples of this version of equity in action, look no further than the bombshell of an essay by Anna Keating, who quit her job in the chaplaincy services for Colorado College Chapel. Colorado College had embraced the Kendi model of equity. Here’s what she says of how the policy applies to Jews:

Here this administrator decided that because Jews, being a tiny percentage of the US population are overrepresented in higher education generally, & at the college where I worked in particular, antiracism in this instance required that the number of Jewish students be reduced.

In addition to the intent to reduce the Jewish population at the school, Keating states that the school wanted to eliminate Jewish religious practice. She quotes her supervisor:

Because of the colleges’ commitment to antiracism and equity the question finally becomes, Is chaplaincy sustainable? Our Jewish community has the support of its alumni donor. How do we manage that? And Roman Catholic students and others interested in Catholicism can apply for grants from an endowed fund for Roman Catholic Studies. And in order to be antiracist we have to have equal resources for Hindu students, Muslim students, Buddhist students, or we need to do away with Spiritual Life groups all together

Keating states “because there were 60 students at Shabbat and only a handful of Muslim students on campus, the Jewish group should not exist.”

This is just one way Critical Social Justice (CSJ) ideology can give rise to antisemitism. CSJ’s common view on equity insists on proportional representation in the here and now by any means possible, and disenfranchises people who are deemed overrepresented. If you can’t find enough people from the disadvantaged group to achieve proportional representation (with no real pipeline in place, how can you?) then you must reduce the numbers of the advantaged group. Just imagine if this idea is brought to scale in all the places where Jews are overrepresented—academia, business, science, medicine, law etc.–and all the places they’ll need to be, well, purged.

I realize that equity won’t always go down like it did at Colorado. But neither is the liberal arts school an outlier. This version of equity is real and being implemented in numerous places. If we don’t push back, this could well become the dominant approach.

Is it not time for Jewish organizations to hit the pause button and ask: can we really get behind an ideology and a set of policies which, taken to their logical conclusion, discriminate against Jews and other minorities?

This is no way to bring about a more just and fair American society.