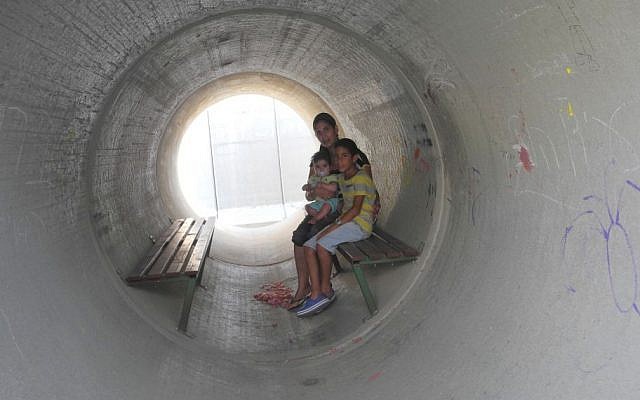 Illustrative: An Israeli family takes cover in a bomb shelter made of a converted concrete pipe during the 2014 Gaza war. (Melanie Lidman/Times of Israel)

I was in kindergarten during the Cuban Missile Crisis. I remember with perfect clarity when the Soviet threat became real. It was the day my teacher sent home a handout on how to build a bomb shelter in the back yard.

“Please!” I begged my parents, waving the handout. I was wild with fear over bombs falling on our quiet neighborhood. Even though money was tight, I was sure my parents would agree that building our own personal bomb shelter was a must.

My dad glanced at the handout and almost choked laughing. “Build a bomb shelter??” he gasped. “We can barely afford to live in this house as it is,” he said. Every day brought more financial woes; the Russians were the least of his worries.

“Forget it,” he said. “Stop worrying.” With that, he tossed the paper in the trash.

The Cuban Missile Crisis resolved, but Cold War tension remained. Civil defense drills at school continued for several more years. Even as a child, I thought that hiding under my desk or huddling in the hallway was absurd. These preposterous drills only made me more frightened.

Eventually things cooled off, at least from the perspective of a child. The civil defense drills stopped. No one talked about building backyard bomb shelters anymore.

I thought about that distant memory while talking to loved ones in Israel last week. After the recent Israeli airstrikes carried out against Iranian military targets in Syria, retaliation by Iran was on everyone’s minds.

I spoke with the young woman who is our daughter by every definition except DNA.

She described a palpable fear in the air, unlike anything she could ever recall. A dreaded waiting.

She told me that all the shelters on her kibbutz in northern Israel were open and stocked.

She reminded me that her husband, a career military officer, was on base at the Lebanon border. He had not been home for days. He would not be coming home for days.

And in her voice, I heard something I’d never heard before. This beautiful girl, as gentle as a kitten and as tough as nails, was afraid. Not for herself. For her two little children.

She asked me: If the siren goes off in the middle of the night, and I’m here alone, how will I get both kids to the shelter in 90 seconds?

Think about it. A little child woken from sound sleep cannot just break into a sprint. What do you do? How does a mother, barely 100 pounds herself, get two kids to the shelter in time?

These questions are not new. Families living in Sderot and other towns near the Gaza border have been dealing with them for years.

But it was the first time one of my loved ones had to figure it out.

And she had crafted a solution. “I’ve got the stroller by the front door,” she said. “I can push one kid in the stroller and carry the other.”

I imagined her doing this — her heart pounding, the adrenaline rushing, her breath ragged — and it made me ill.

The retaliation she feared took place a day later. It was carried out by Iran, not a proxy. Only four of the rockets made it into Israel and all were intercepted by the Iron Dome. Israel responded with a devastating attack hitting dozens of Iranian military targets in Syria.

So all is quiet. For now.

All of this took place while the United States withdrew from the JCPOA (the Iran nuclear agreement). The media broadcast a steady stream of pundits weighing in, some in favor, some against. All spoke with airy confidence, even when admitting that the consequences of the move remain unclear.

I remember those same pundits, arguing over the JCPOA with the same confidence in 2015.

Now we know some of the consequences of that agreement.

Bret Stephens of the NY Times wrote, “The easing of sanctions also gave Tehran additional financial means with which to fund its depredations in Syria and its militant proxies in Yemen, Lebanon and elsewhere.”

That Iranian military buildup in Syria is what Israel has been fighting. And that has stoked fears of Iranian retaliation.

Attacks? Retaliation? Proxies? Pundits talk and talk, but they don’t live with the consequences of the policies they argue over.

Neither do the armchair colonels or keyboard commandos, ever eager to weigh in on how Israel defends herself.

Whether the threat is coming in the form of Iranian rockets from Syria, rioters, flaming kites and terror tunnels from Gaza, Hezbollah’s arms buildup in Lebanon, and more — if you live outside of Israel, please remember this:

It’s easy to have an opinion on complex matters from a safe distance.

It’s easy to weigh in when you don’t live with the consequences.

You don’t need to keep a stroller waiting by your door and neither do I.

You don’t need to figure out how fast you can run to a bomb shelter and neither do I.

All I know of bomb shelters is that I begged for one as a child.

A bomb shelter that we never built and never needed.