The Blogs
Joseph H. Prouser
Apply for a Blog
Please note that the posts on The Blogs are contributed by third parties. The opinions, facts and any media content in them are presented solely by the authors, and neither The Times of Israel nor its partners assume any responsibility for them. Please contact us in case of abuse. In case of abuse,
Report this post. 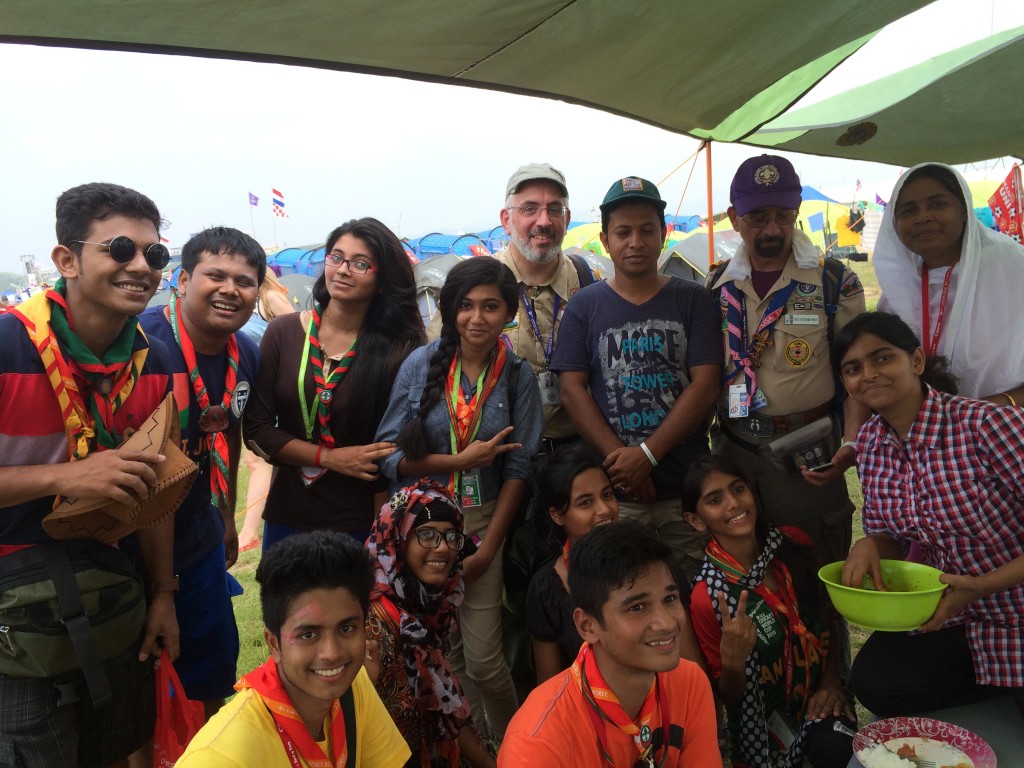 Rabbi Joseph Prouser, at the center of the last row, and a Muslim chaplain with a troupe from Bengal. (Girls are part of the scouting movement outside North America.) 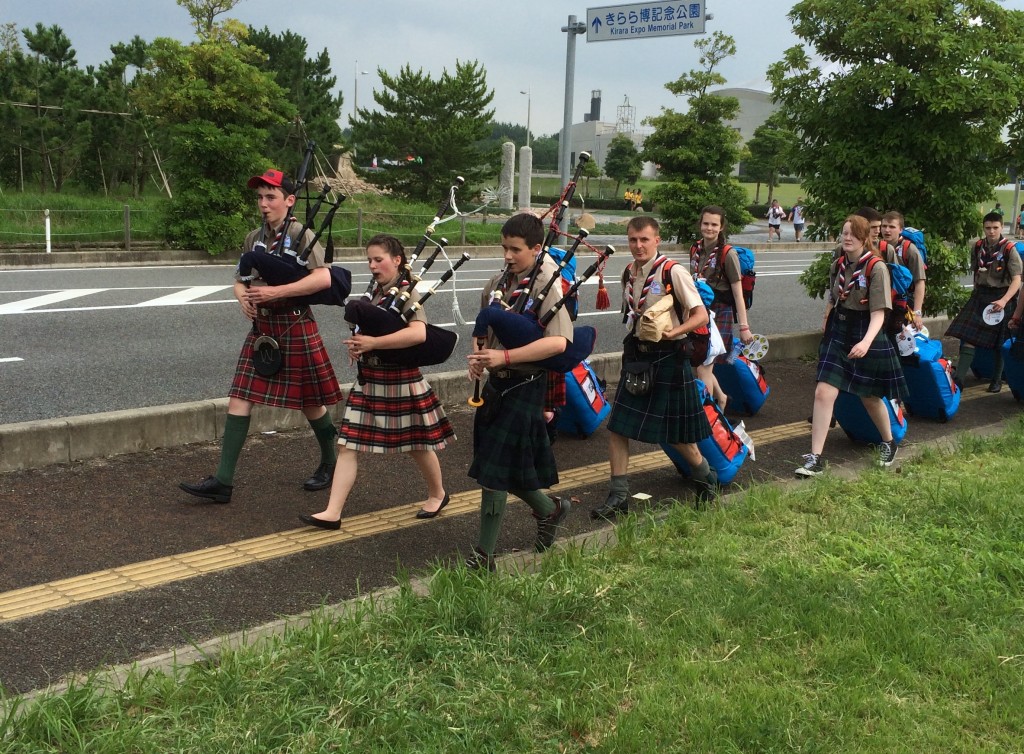 The Scottish contingent arrives at the Boy Scout Jamboree.

A distinct high point among my rabbinic activities this past week was the opportunity to offer an invocation at an Eagle Scout Court of Honor — the ceremony at which a boy is recognized with the highest award the Boy Scouts of America bestow.

The newly minted Eagle Scout in this case had been a young member of the congregation I led in Newington, Connecticut, for many years. His parents were active members of the community, congregational leaders, and observant Conservative Jews. This was not the first rite of passage that brought me and this particular guest of honor together — almost 18 years ago, it was my privilege to bestow his Hebrew name upon him at his bris. I also had joined his parents together in marriage.

It was deeply gratifying to be reunited with this young man, and to see how seriously he has embraced both his religious obligations and the values of character, patriotism, and leadership at the heart of the Boy Scout movement, an organization with which I (Eagle Scout Class of 1976) have been proudly affiliated for some 40 years.

One of the troop leaders in attendance at the celebration shared a series of statistics with the assemblage, demonstrating the impact of the Boy Scout experience. For example, he pointed out that 89 percent of boys serving as high school senior class presidents have been involved in scouting, as have 85 percent of those boys elected high school student council president. So, too, 71 percent of high school football captains and 65 percent of basketball captains. Looking only at the men in each of these groups, Boy Scout alumni also account for 85 percent of FBI agents, 65 percent of college graduates, 72 percent of Rhodes scholars, 63 percent of Air Force Academy graduates, 68 percent of West Point graduates, and 70 percent of Naval Academy graduates. Eleven of the 12 astronauts to walk on the moon had been Boy Scouts, including Eagle Scout Neil Armstrong. Apollo 13 commander Jim Lovell (with whom I had the opportunity to discuss Scout programming) also was an Eagle Scout.

In addition to opening this week’s cheerful proceedings with a word of prayer (“I have borne you on eagle’s wings, and brought you close to Me…”), I also presented my young fellow Eagle Scout with a congratulatory letter and certificate on behalf of the National Jewish Committee on Scouting, on which I have served for many years. The function of that national committee (one of the oldest in the Boy Scouts of America, together with the analogous Roman Catholic body), is to provide Jewish programming, to administer a religious awards program (recognizing boys’ learning, observance, and service in the Jewish community), and to recruit Jewish organizations — congregations, Jewish community centers, and schools — to sponsor local troops and Cub Scout packs.

For many years, the National Jewish Committee’s efforts to recruit sponsoring organizations — called charter partners — in the Jewish community has been hampered by objections among progressive Jews to a BSA policy barring gay men and women from serving as volunteer adult leaders. Many congregations and Jewish schools have refused to sponsor affiliated troops or have severed ties to the Boy Scout movement to protest the policy on adult leaders. As a result, the number of Jewish-sponsored local units — and as a consequence, the number of Jewish boys and teens affiliated with the BSA — declined precipitously in recent years. The Boy Scouts of America was impoverished by the decline in Jewish enrollment. More tragically, Jewish boys and teens have missed out on an outstanding program that combines fun, healthy outdoor activities, patriotic expression, leadership- and character-building activities, and socialization in a culturally diverse context.

All this is done through an organization that from its founding more than 100 years ago has — on principle — warmly and explicitly included Jews at every level, and that has inspired countless young members of the Jewish community (this rabbinic writer among them) to deeper religious commitment and devotion.

The national policy barring gay volunteer leaders, which has led so many Jewish organizations to eschew the Boy Scout movement, has been dropped. In a new policy introduced by BSA President (and former U.S. Secretary of Defense) Robert Gates, himself an Eagle Scout, and adopted by the BSA executive board, local charter organizations — synagogues, day schools, and Jewish community centers, as well as churches of a variety of faiths — now will be permitted to set their own standards for volunteer leaders. That is to say, prospective sponsoring organizations in the Jewish community henceforth may organize troops staffed with adult volunteers regardless of sexual orientation if they so choose.

Religious organizations with principled objections to enrolling gay adult volunteers in their own troops are permitted to make their local staffing decisions accordingly. It is widely assumed that Roman Catholic and Mormon churches, for example, will avail themselves of this option, as may some traditional Jewish groups. A church or synagogue or religious school that uses scouting as an aspect of its own religious educational program or ministry properly is entitled to shape the local troop activities and structure to reflect its own religious vision. Sponsoring organizations that are not faith-based (fraternal organizations, for example) do not have the option of a local policy excluding leaders on the basis of sexual orientation.

While shifting staffing decisions to the local sponsoring organization may not satisfy all those who have objected to the earlier BSA policy, I hardly think that the religious scruples of, say, a local Mormon church in Orem, Utah, or a Catholic church in Chicago, should preclude a Reform synagogue or a Jewish community center or a Hebrew day school in New Jersey (or elsewhere) from providing young Jewish boys with a religiously sponsored Scout troop experience in accordance with their own religious and social principles.

In short, it is time for the progressive Jewish community to step up. Religious organizations that have boycotted the Boy Scouts on the basis of its volunteer leadership policies — offering assurances implicit and explicit that a cooperative relationship would resume upon adoption of a more inclusive stance — now should eagerly make good on those stated intentions. A broad influx of BSA charter partners from within the Jewish community would have a transformative impact on the organization, raising the visibility and stature of the Jewish community in a venerable and diverse American institution, providing an avenue for Jewish youth activities (with a long record of proven success) tailored to reflect local Jewish values, and demonstrating to the Boy Scouts of America the profound benefits of responsiveness to Jewish religious and moral concerns.

Not insignificantly, a broad influx of BSA charter partners from within the Jewish community — thereby matching action to rhetoric — will be a dramatic expression of the honor and integrity that the Boy Scouts of America, regardless of religious persuasion or political perspective, so deeply cherish and sincerely value. “A scout is trustworthy.”

As for Jewish sponsoring organizations and individual supporters of scouting who maintained a relationship with the BSA despite misgivings about leadership policies, your persistent friendship has been profoundly appreciated, not only by your fellow Jews in scouting, but by all who value the BSA’s mission. May your bonds with scouting grow only stronger and more satisfying.

For those in the Jewish community who viewed the BSA’s erstwhile policy with approval, all your scouting compatriots look forward to your continued support and participation.

On the BSA adult volunteer policy — as on almost every issue confronting us — the Jewish community has never spoken with one voice, and honorable and mutually respectful discussants will continue to hold differing opinions. Whatever your religious perspective on homosexuality — and whatever your views on the earlier BSA policy on adult volunteer leaders — Jewish religious organizations from across the denominational spectrum should now take a fresh look at the Boy Scouts of America, and declare as one — in both word and through meaningful action: “How goodly are thy tents, O Jacob!”

May those ancient words of prophecy (first spoken at Sedeh-Tzofim, literally “A Field of Scouts” — see Numbers 23:14; 24:5) continue to bring blessing to the Jewish people, and may a principled Jewish community — now more than ever — do all it can to bring blessing to a deserving organization that has served and shaped our youth for more than one hundred years.

About the Author
Joseph Prouser is the rabbi of Temple Emanuel of North Jersey in Franklin Lakes.
Comments