In the wake of the devastating kidnapping of three of our boys, there has been a lot of talk about ‘tremping’,  since it was in a ‘tremp’ that the boys were kidnapped.

For the uninitiated, in Israel a tremp (adapted from the European slang “tramp” but with an Israeli accent) is basically a ride for the carless or the cheap. Also known as hitchhiking in other parts of the world, in Israel this cultural mainstay is almost an informal carpool system. As I do have a car but I am often cheap, I have found myself to be both a tremper and a giver of tremps; often on the same day.

There has been quite a bit of unwarranted, sanctimonious criticism tossed around about people tremping in Israel. In an effort to explain the tremping culture, Jessica Steinberg, of The Times of Israel, wrote How Hitchhiking Became the Norm. While I greatly respect Jessica, I believe that the article is very misleading and some things listed as facts are altogether incorrect. Here’s my take on it. 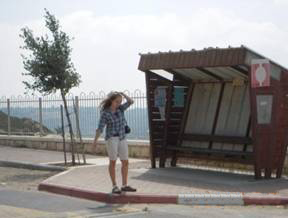 Hitchhiking is a way of life here in Israel.  Adults and kids; religious and secular; students and professionals; it’s standard. Some people erroneously believe it is a religious phenomenon. It may seem that way since there are many religious people in the Judean and Samarian communities which rely heavily on tremps. But stand at a trempiada for a while and you’ll see that nothing could be further from the truth.

A case in point would be the trempiada in Gilo, on the way to Gush Etzion. You will see haredim tremping to Beitar standing right next to largely secular people tremping to Tzur Hadassah. Every. Single. Day.

Tremping is kind of like (very) informal, spontaneous carpools… Rather than calling everyone you know to see who is going to where you have to get to, you simply stand at a standard community entry or exit point and ask the people who are already en route, clearly heading in the right general direction.

There are lots of rules and expectations that are generally followed; hand signals, gestures, and so forth. This is the way we get around here. Yes there are cars and buses and taxis. But cars are expensive to buy and more expensive to run. Taxis are even more expensive. And buses? They’re great if they’re scheduled for when you need it. And when they actually come. And when they happen to be going to where you have to get to…  The point is that people who get into a tremp are not being reckless for the chance of being kidnapped any more than you can say getting into a car is reckless since you might get into an accident. (And are frankly the latter is MUCH more likely to happen…)

Steinberg quoted a high school student saying, “If you’re right-wing or an extremist, you take a tremp.” This is completely ridiculous. If you’re an extremist you tremp?? What does that even mean? Perhaps she happened to interview a right-wing, extremist, clueless student. But the impression he gives is sorely, sorely misleading.

She further quoted Professor Gad Yair, a sociologist at Hebrew University who claims that the main populations that tremp these days are the haredim who tremp because it is inexpensive, and the National Religious who tremp because of the following attitude: “‘It’s our state and no one will stop us or scare us.’” He added, “It’s a guerrilla stance.”

It was those three points that got many people up in arms about the whole article, as you can see in the comments. I felt compelled to respond, but as an academic was quoted, I wanted more than just my personal impressions and opinions to back me up, so I put out a survey. Surely my survey would not hold up to any real scientific scrutiny, but it most definitely has value.

Here’s what I found from 100 people who responded:

Of the respondents, 66% listed ‘Israel’ as where they live, and 23% listed Israel-Judaea/Samaria. The rest live outside of Israel. Age range and religious observance was widely across the spectrum.

Upon analysis, the only pattern I found was that those living outside of Israel had a lower opinion of tremping. Of those who had a favorable opinion, they were just as likely to be secular or religious. The opposite was true as well. Same with age factors.

Most people added their own comments which further supports the practice:

“You need to be careful and mindful and educated but [tremping is] a generally accepted way of getting around.”

“[Tremping is] a neighborly act, helping others get to their destination.”

Moving on, it is important to clarify a few things. There is certainly a difference between tremping from just any random spot on the side of a road vs. tremping from within the gates of your community, or from a popular, populated ‘trempiada’ (like an informal – or actual – bus stop which is used as a pick-up point for trempers) – particularly one with security or an army presence.

Other factors such as tremping alone, tremping in the middle of the night, and tremping from a remote or desolate spot are all certainly things that can affect safety. But really? Just walking alone in those circumstances can be dangerous. Does that mean we tell people not to walk? We mustn’t be irresponsible, but to those who understand the tremping culture it is not just ‘randomly jumping into any strange car from any place that happens to be going in your direction.’ We aren’t stupid.

Bottom line? Tremping is NOT a guerrilla act. It’s NOT a display of ownership. And it is NOT a right-wing or extremist statement. It’s a solution to a problem of poor public transportation and expensive cars. And the practice isn’t going away any time soon, though certainly extra precautions are being taken across the board. Most importantly, if a tremp – or any other action – leads one into the clutches of terrorists, the blame can be ascribed to one place and one place only: the terrorists.

With all that said, and most, most importantly, may our boys – Eyal, Gil-Ad and Naftali – be found safely and swiftly, and returned to the loving embrace of their incredible families.