Notwithstanding a most probable error of identification, purposeful or not, I accept that for Muslims, the Haram A-Sharif courtyard in Jerusalem, built over the Temple Mount precincts, called also the Al-Aqsa Compound, is holy and sacred for them.

To their credit, most do acknowledge that its degree as a holy site is only third  after Mecca and Medina.

However, exactly how does a religion respect their own holy site? And more importantly, if that same site is a sacred location of another religion, what then?

You can watch Muslim children play soccer there. Do handstands. Play with toy guns and even aim them at policemen. Or threaten to stab one with a knife.

Just recently, roman candle firework were smuggled in to a mosque to be fired at policemen as TOI reported last week.

It is so holy that Hussein ibn Ali, who established a Sharifate in Mecca in 1908 and had declared himself a Caliph in 1924, for all of some eight months, had himself buried there. 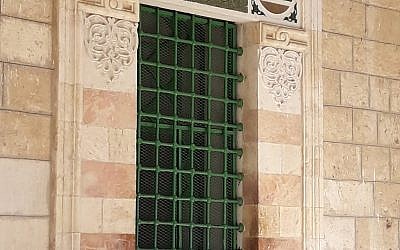 Don’t laugh at his “Caliphate”. It is included in the 2013 agreement between the Kingdom Of Jordan and the Palestinian Authority which arranged the rerecognition of the King’s custodianship over the Temple Mount:

That agreement also slyly expands the 144 dunam courtyard by using language that annexes areas outside the walled compound so:

Al Masjid Al-Aqsa with its 144 dunums, which include the Qibli Mosque of Al Aqsa, the Mosque of the Dome of the Rock and all its mosques, buildings, walls, courtyards, attached areas over and beneath the ground and the Waqf properties tied-up to Al Masjid Al Aqsa, to its environs or to its pilgrims (hereinafter referred to as “Al Haram Al Sharif”)

In short, the ‘historic’ status quo (as PM Netanyahu declared back in October 2015: “Israel will continue to enforce its longstanding policy: Muslims pray on the Temple Mount; non-Muslims visit the Temple Mount”) is not that static.  It’s just that Muslims can alter things like banning Saturday visits, create new holiday periods or construct new buildings and Jews still can’t pray openly, cannot engage in archaeological excavations or stop terror-supporting rallies. Arab MKs enter and contribute to the incitement of violence.

In a sense, this is a very grave matter.