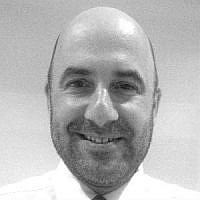 The Blogs
Richard Millett
Apply for a Blog
Advertisement
Please note that the posts on The Blogs are contributed by third parties. The opinions, facts and any media content in them are presented solely by the authors, and neither The Times of Israel nor its partners assume any responsibility for them. Please contact us in case of abuse. In case of abuse,
Report this post.

On Tuesday night in the British Parliament I asked Manuel Hassassian, the unofficial Palestinian ambassador to the UK, why in the speech he had just delivered in which he accused Israel of “war crimes” he made no mention of Palestinian violence, specifically the recent murders by two Palestinians of four Rabbis and a Druze policeman at a west Jerusalem synagogue.

He answered me directly but when he said that Palestinian President Mahmoud Abbas had condemned the killings I reminded him, as you can see in the clip below, that Abbas had incited the murders in the first place with his violent rhetoric including imploring Palestinians to use “all means” to stop Jews visiting the Temple Mount. Here is our confrontation:

Meanwhile, a woman had just told the room that the Palestinians were suffering a fate worse than that of Anne Frank.

What she said was bad enough but the most chilling aspect was the warm applause she received from both Hassassian and ex-Labour MP Martin Linton, now chairperson of Labour Friends of Palestine, as well as from the others present.

Here’s the clip of her mocking the memory of Anne Frank who was murdered by the Nazis at Bergen-Belsen concentration camp at the age of 15:

The actual event at Parliament was about that recent vote to recognise a Palestinian state at some time in the future. Although it was held under the auspices of the All Party Parliamentary Group on Third World Solidarity it was for all intents and purposes another sickening Labour Party anti-Israel event.

As well as Linton current Labour MP Khalid Mahmood spoke. Labour MP Richard Burden and Labour’s Lord Ahmed were also due to speak but were both absent.

Mahmood replied to my question on the role of Hamas in the conflict by accusing Israel of bombing the Palestinian Authority out of Gaza so leaving the road clear for a Hamas takeover.

Hamas had fought a bloody civil war against the PA but Mahmood’s response shows the serious level of misinformation gladly assumed by many British politicians. Here is Mahmood expressing his pure ignorance of events:

Finally there was Linton, now notorious for invoking anti-Jewish Nazi imagery when he once referred to “the tentacles of Israel” interfering in Britain’s political system.

At Tuesday night’s event while he mentioned that Mohammed Abu Khedair was murdered by Israelis he never mentioned that Israeli teenagers Eyal Yifrah, Gilad Shaar and Naftali Frenkel were murdered by Palestinians. According to Linton the latter had been merely “kidnapped”. I interrupted to remind him of their fate as you can see here from 2 mins 40 secs:

Remarkably there were only 25 people present at the event with swathes of empty seats. Those present finally convened for a group photo, see below, and with numbers short I offered to help out with taking photos for those who wanted a memento of the sour night.

see more at my blog at www.richardmillett.wordpress.com

About the Author
Blogger who writes about Israel and anti-Semitism. Has a Masters in Near and Middle Eastern Studies from the School of Oriental and African Studies, London. Supports Leeds United and Yorkshire Cricket Club. A Londoner.
Comments