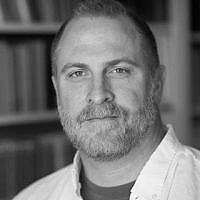 The Blogs
Robert R. Cargill
Apply for a Blog
Advertisement
Please note that the posts on The Blogs are contributed by third parties. The opinions, facts and any media content in them are presented solely by the authors, and neither The Times of Israel nor its partners assume any responsibility for them. Please contact us in case of abuse. In case of abuse,
Report this post.

I am a friend of Israel. I have been for a long time. And yet, it took these past two decades of experience and study to understand what that phrase truly means.

In 1999, I was headed to Banias — ancient Caesarea Philippi — as part of my very first archaeological excavation headed by John F. Wilson of Pepperdine University and the late Vassilios Tzaferis of the Israel Antiquities Authority. I was a graduate student on my way to dig a first century CE site that is mentioned in the New Testament — a place where Jesus performed a miracle, no less (Matthew 17:14–20; Mark 9:14–29), and perhaps even the location of the Transfiguration (Mark 9:2–8)!

Having been a baseball player in my undergrad years, and a catcher at that, I had a familiar relationship with dirt, and was comfortable with hard work and sweat. Combined with the fact that I was a natural science major (human physiology), archaeology came naturally to me, and became an instant love, bordering on an obsession.

I loved archaeology and the Bible, so naturally I loved Israel. I loved the very concept of Israel — its history, its people, its geography. And, because I tended to conflate modern with historical, I identified ancient Israel with modern Israel and merged my love for biblical Israel with support for the policies of the government of the modern state of Israel, regardless of the political party in power at the time. I fused my passion and love of Israel with political support for the Israeli government. I did this because I was a friend of Israel.

It was on my first dig in Israel that my view on what it meant to be a “friend to Israel” began to change. One evening, while we were sitting around talking after a hard day of digging, I was criticizing an individual who claimed he loved Israel, but who opposed a particular policy held by the Israeli government. I questioned how he could say he truly loved Israel (and implicitly, whether he had ever bothered reading his Bible), if he was opposing the Israeli government.

Just then, one of the Jewish Israelis, Omer, working with us chimed in. Omer said, “So, Bob, you are a Republican?”

“That’s right,” I replied, for I had been at the time.

Omer continued, “And you are a proud American?”

“I love my country!” I exclaimed proudly. “I love America!”

Omer replied, “But you don’t like President Clinton and oppose his policies?”

I retorted, “Correct. I think his policies are wrong for America.”

Omer then looked down at his glass, and then looked up at me and asked, “So, you oppose your own government, but you claim to be a ‘proud American’?”

I began to respond, “Yes, because opposition to a particular political party in government does not equal opposition to the nation as a whole, or its history, or its …”

And then I stopped. And that was it. As I was responding, Omer silently had raised an eyebrow at the exact moment I recognized the inconsistency of my logic.

To my own shame, that was the moment I realized the mistake I had been making every time I criticized someone for not “loving” or being a “friend” of Israel simply because they had a difference of opinion with regard to a modern political policy of the Israeli government.

I looked at Omer and said, “Point taken.” I shut my mouth and didn’t speak for the rest of the evening (I am certain to the delight of everyone around).

I also came to realize that like any true friendship, being a friend of Israel is an active process, not a passive one. It means being more than a fair-weather friend; it means celebrating successes together, encouraging her to be the best she can be, promoting and defending her, but also being willing to speak truth and offer words of correction, when she has offended others, or is engaging in policies that undermine her credibility on the global stage.

Finally, being a friend of Israel means loving, forgiving, and moving forward with the knowledge that true friends will walk by each other’s side, through thick and thin.

Through friendship, memories are born, and many of my fondest memories were forged in Israel. I have experienced the greatest delights and crushing disappointments. I have witnessed absolute joy and sheer terror. I have laughed and cried, beheld hope and despair, and experienced a life’s worth of emotions in this holy land I call, “my friend Israel.”

I’ve been proud of you and have been disappointed by you. My youngest son, Judah, derives his name from you. I’ve written books about you and given my life to trying to understand you — your history, geography, and archaeology; how this reality came to be represented in the Bible; and how the Bible was, in turn, received and reinterpreted by various groups.

I guess what I’m ultimately trying to say is that I love you and will always be your friend.

So l’chaim, Israel! Happy 70th birthday. May all your people know peace. And as my great-grandfather used to toast in broken English, “Everything the best!” — B.C.

Robert R. Cargill is Editor of Biblical Archaeology Review and Assistant Professor of Classics and Religious Studies at the University of Iowa.

About the Author
Robert R. Cargill is editor of Biblical Archaeology Review and assistant professor of Classics and Religious Studies at the University of Iowa.
Comments