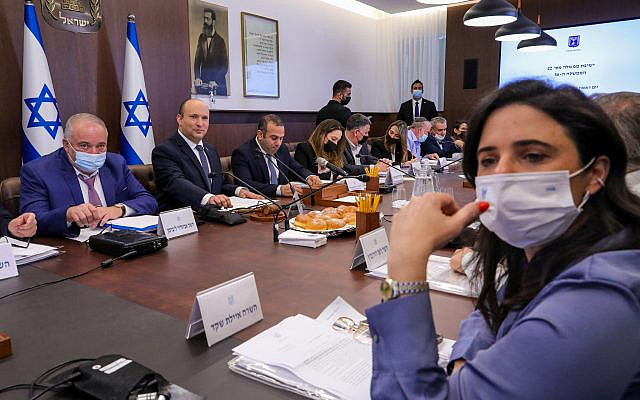 The Bennett-Lapid coalition is entering its ninth month. In a few weeks, its gestation period will be over. It is succeeding, despite enormous odds, in sustaining its formal continuity. But can it also assure the stability of governmental rule? The answer to this question is in doubt as potentially divisive decisions are either sidestepped or postponed on almost a daily basis.

On 13 June 2021, the Bennett-led “change” coalition of eight political parties spanning from the ideological right to the left (and including an Arab party for the first time in Israel’s history) was established on the basis of an agreement to maintain the “status quo” on all matters not in consensus. This was meant to signal that the thorny issues of peace and security would ostensibly be put on hold (or, as Prime Minister Naftali Bennett put it: “there will be no Palestinian state and no annexation”).

The logic behind this move was as obvious as it is fallacious. The diverse coalition knit together to oust Benjamin Netanyahu had in common only one thing: the desire to rid the country of more than a decade of the increasingly authoritarian and populist rule of a politician under indictment on multiple counts of corruption. Its partners believed that by tackling the mounting problems of the coronavirus pandemic and its socioeconomic ripple effects, it could reinstate faith in government and reset Israel’s course. What they chose to overlook is that nothing is static in the country’s complicated and constantly changing environment.

The divergent interests of the component parts of the new coalition, even when immense efforts are made, cannot be put on hold indefinitely. Moreover, as life goes on, new challenges constantly arise in a tumultuous regional setting ensconced in a shifting international order. Reality has a way of rearing its head and demanding attention, even from a government averse to making critical decisions. A policy of extinguishing brushfires when the country is burning is no longer an option.

The best-known flashpoint requiring immediate action is in the Sheikh Jarrah quarter in Jerusalem or, as labeled by militant right-wing groups, the Shimon Hatzadik neighborhood. The ouster of some Palestinian families from the area by Jewish settlers and the pending eviction of yet another family continues to ignite widespread violence well beyond its confines. Sheikh Jarrah has been a bone of contention for quite some time, sparking multiple clashes in the past, leading up to riots in May 2021 that spread throughout the West Bank and Gaza and then deep into the heart of Israel. The violence is now threatening to erupt once again unless the government takes a stand. But it can’t do so without either clashing directly with its right fringes (who fear confronting the most rabid anti-Arab elements in the country led by avowedly racist Member of the Knesset Itamar Ben-Gvir), its leftist-leaning components (who, aware of the ramifications, oppose any further inequitable treatment of Palestinians in Jerusalem), or traditional allies in the democratic world who caution against any further escalation. Inaction is, in this and other instances, a prescription for inevitable explosion.

The same holds true for the contested future of the illegal outposts Evyatar and Homesh, which have yet to be evacuated despite long standing court orders to do so. These beds of anti-Palestinian vigilantism have spread untold damage in recent months, but removing them permanently constitutes a domestic powder keg that engenders considerable reluctance in government circles. The upshot is rising violence which itself constitutes, according to the uppermost echelons of the defense establishment, a growing security threat.

Add to these flashpoints the continuation of settlement and infrastructure construction in the occupied territories, the inability to protect Palestinian residents from settler brutality, growing unease in and around the Gaza Strip – fueled by politicians whose presence in the streets and the media far outweigh their parliamentary activity – and the mirage of a manageable status quo becomes even more ludicrous. The Palestinian-Israeli question can no longer be neatly brushed under the carpet as if it were an easily controllable and temporary annoyance.

These tensions have spilled over onto large portions of Israel within the Green Line, with skirmishes around attempts to plant trees near Bedouin villages in the South, growing violence within Arab communities in the country, ongoing clashes between hawks and doves – many involving law enforcement bodies – on the streets of Israel’s main cities, and the renewal of the patently discriminatory ban on family unification for Palestinian citizens of Israel with the reintroduction of updated versions of the Citizenship Law. All of these further unsettle an already precarious domestic situation fraught with economic uncertainty, social insecurity, religious-secular strife, and ethnic acrimony.

These issues inevitably have a bearing on Israel’s ability to contend with burning external issues as well. Close to home, the capacity to deter the Hezbollah has given way to a stand-off, raising serious questions about the utility of Israel’s “campaign between the wars.” The same holds true for its repeated incursions into Syria under Russian auspices. And, despite multiple efforts to cement relations with moderate Sunni states – especially in the Gulf – even the closest of alliances have proven to be unpredictable in current circumstances.

In the broader region, it is still unclear how Israel will react to the impending revised agreement with Iran following its failure to prevent its renewal without substantial changes that would address concerns regarding other aspects of the Iranian presence in the region.

All this now impinges also on Israel’s stance on the escalating crisis in Ukraine. Israel is trying to support the American-Western European efforts in order to fortify its strategic alliance with the United States without alienating Putin’s Russia – on which it depends for its maneuverability on the northern front. In the interim, it has tried to avoid taking a position on Ukraine. How much longer can this government play both ends against the middle without any consequences? Such a stance would be both irresponsible and unconscionable.

The effects of this purposeful indecisiveness are more apparent now than ever before. The ingrained fragility of the present government, protestations aside, is rising. Israeli society is even more bifurcated along socio-political lines than in the past, with unequal polarization fast becoming embedded in every aspect of daily life. Security is everywhere compromised – with personal safety at a low ebb. As competing groups constantly vie with each other in every conceivable forum for power and dominance, the control of formal institutions is waning (the exchange between Member of the Knesset David Amsalem and President of the High Court Esther Hayut is one example), the public interest is being sacrificed, and with it the capacity to govern is being severely curtailed. As institutional breakdown proceeds apace, it is no wonder citizen confidence in state institutions has reached a new low.

A direct line links this government with its predecessor. The pattern it has created builds upon and deepens trends that emerged during the Netanyahu era, accentuating the systematic erosion of the rule of law and the unraveling of binding norms which became the hallmark of the last decade. In what is undoubtedly an ironic and yet unsurprising turn of events, the replication of pragmatically-driven indecision is exacerbating the implosion of the public domain.

This picture can and must be reversed. But this requires four intertwined moves. First, on the immediate level, the inherited aversion to making hard decisions has to be overcome not only on regional (Iran, Lebanon, Syria) and global matters (Ukraine) but also on questions related to imminently explosive Israeli-Palestinian relations. Second, the government needs to shore up fraying state institutions, which involves both reinforcing accountability and assuring horizontal and vertical checks and balances, while promoting consistency in policy and implementation on an equitable and inclusive basis. Third, the strengthening of governance cannot be achieved without fortifying the foundations of state power – especially the fast-dissipating monopoly over the use of force and the clear delineation of boundaries. Finally, then, in the long run, all this leads back to the imperative of confronting the root issue of devising a durable, equitable and just formula for how Jews and Palestinians can peacefully share the land.

All these measures cannot be set in motion concurrently, especially not by the risk-averse coalition in office today. But if it wants to continue to rule it must set the process in motion. This is what governability in this part of the world, especially in the third decade of the 21st century, ultimately means.