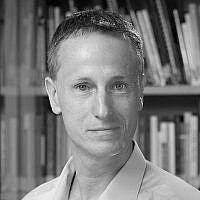 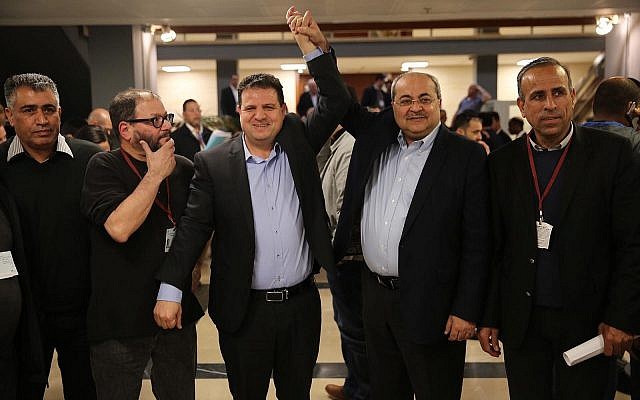 Illustrative. MKs Ayman Odeh and Ahmad Tibi react after submitting a joint list of candidates from their Hadash and Ta'al parties to the Central Elections Committee at the Knesset on February 21, 2019. (Hadash)

There are just over 6.3 million voters on the electoral roll for the 21st Knesset elections this year. Of these, some 950,000 (15 percent) are Arab citizens of Israel. In the 2015 elections, voter turnout in Arab localities stood at around 64%. In the upcoming elections, according to a survey by the Abraham Initiatives, voter turnout among Arab citizens is expected to drop sharply to 56%. If this indeed occurs, it will signify a return to the average levels of voter turnout in the Arab sector during the decade that preceded the formation of the Joint List.

Now the question is this: from a pool of 550,000 actual votes by Arab citizens, and assuming that around 80,000 of these will go to Jewish-Zionist parties, how will the remaining 470,000 votes be split between the two newly unions established from the former four components of the Joint List — Hadash with Ta’al, and the Islamic Movement with Balad — and also ensure that the parties retain the 13 seats won by the Joint List in the last election.

The Joint List is now, of course, history. Two months ago, MK Ahmed Tibi announced that his party, the Arab Movement for Change (Ta’al), was withdrawing from the Joint List, an umbrella union for the four leading parties in the Arab sector, established just before the 2015 elections. His decision was not based on ideology, but rather on Ta’al’s demand to increase its representation on the Joint List to two slots among the first 13 seats that the Joint List won in the 2015 Knesset elections.

The political history of the Arab sector has seen several election campaigns in which voter turnout increased and reached a relative peak, compared to the average turnout in the Arab sector at the time. In the 1977 elections, voter turnout reached 75%, after Rakah (the New Communist List, which later established Hadash) recruited Arab citizens using nationalist slogans after Land Day of March 1976. In the 1996 elections, voter turnout reached 77% — the highest ever since military rule was abolished in 1966 — due to the participation of two new political actors in the Arab sector at the time: the Islamic Movement and the Arab-Palestinian nationalist party of Balad. In the 2015 elections, voter turnout reached 64%, thus reversing to some extent the effect of an elections boycott following the October 2000 events, in which 13 young Arab citizens were killed in violent confrontations with Israeli police. The common denominator of these three elections is that Arab citizens felt that the parliamentary game had reached a critical point in which their representatives would be able to work in synergy and trigger real change.

But there is a catch to this scenario.  In both the 1977 and 1996 elections, Arab voter turnout was almost as high as the national turnout. By contrast, in 2015, it (64%) was much lower than the national turnout (72%). Some Arab commentators choose to look at the half-full glass and say that a slight increase in Arab voter turnout in the 2015 elections was enough to create an unprecedented achievement to the parties comprising the Joint List.  However, the political crises that the List has endured over the past year — from the crisis over rotation of MKs to the resignation of the Arab Movement for Change — have had a negative impact on the Arab street. Recently, there have been explicit calls to boycott the elections in protest of what is seen as politicians’ insults to the intelligence of the Arab voter. Some public figures in the Arab sector even claim that in the upcoming elections, the Arab parties’ representation in the Knesset will revert back to numbers seen in the 1980s, when they won a maximum of five or six seats.

A large majority of the Arab public in Israel takes a pragmatic and matter-of-fact approach to politics. According to the findings of the 2018 Israeli Democracy Index survey, the three most important qualities that Arab citizens expect from any public figure is the ability to get things done (39%), to keep promises to voters (33%), and incorruptibility (24%). By contrast, ideology is considered to be of negligible importance (cited by less than 2% of the respondents). What remains to be seen is whether Arab elected officials will indeed adopt a pragmatic and matter-of-fact approach and overcome the obstacles standing in the way of establishing political partnerships among them, in order to encourage Arab voters to go to the polls on Election Day.