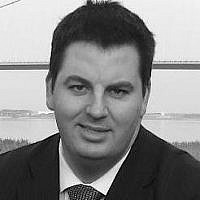 The Blogs
Andrew Percy
Apply for a Blog
Please note that the posts on The Blogs are contributed by third parties. The opinions, facts and any media content in them are presented solely by the authors, and neither The Times of Israel nor its partners assume any responsibility for them. Please contact us in case of abuse. In case of abuse,
Report this post. 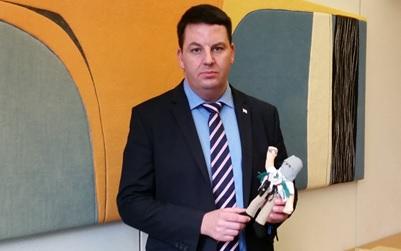 As I write this article I have a knitted children’s doll of a masked Palestinian with a rock in his raised hand, sitting on my desk beside me. Last month, Israel intercepted four thousand of these dolls in Haifa port; they were bound for the Palestinian Authority, where the PA would have distributed these dolls to its youngest citizens.

The dolls encourage Palestinian children to throw rocks at Israelis. Incitement to violence is commonplace in the Palestinian Territories and amounts to psychological abuse of children. The doll is just the latest example of the hate and abuse directed at Israel, or rather Jews, which routinely appears in Palestinian textbooks and official PA TV children’s programmes. As many as 25 schools have been reportedly named after Palestinian terrorists who targeted and murdered Israeli civilians.

Yesterday, Sarah Champion MP led a Westminster Hall debate on the detention of Palestinian youths by Israel. I have no doubt that Sarah Champion is motivated by the interests of children. As a former teacher, I too want the very best for children and young people across the world. I was inspired on a recent visit to Jerusalem to meet Palestinian and Israeli Jewish young people being educated together. That is what we need to be promoting; increased contact between the two communities, especially young people. We don’t hear this from those in the Palestinian solidarity camp though, who prefer a base ‘Israel evil’ narrative.

It is depressing that so many pro-Palestinian and anti-Israel advocates seem more concerned with portraying Israel as a monstrous villain that targets Palestinian children. It is true that Israel’s security service arrest and detain many Palestinian youths, mostly in their late teens. This doesn’t happen in a vacuum though.

The sober, inconvenient truth is that 70-75% of all crimes committed by the youth of the West Bank are violent. In 2013 for example, of the 470 indictments filed against minors, 54% were related to rock-throwing and 14% to throwing Molotov cocktails. In some cases, they are deadly.

It was staggering in yesterday’s debate to hear one Labour MP state that no stone thrown had ever killed anybody. This is factually incorrect. Leaving aside that these stones should really be described as rocks, not only have they caused serious injuries to civilians, they have led to deaths. In March 2013, five Palestinian minors hurled rocks at an Israeli car carrying Adva Biton and her three young daughters. The youngest of these girls, three-year-old Adele, recently died due to complications after she was permanently brain damaged in the attack. In September last year, a rock-attack on a car in Jerusalem resulted in the death of driver, Alexander Levlovitz, who lost control of the vehicle. Four Palestinian youths were arrested.

The violence isn’t limited to stone throwing. We could mention Eden Attias, stabbed to death while sleeping on a bus by a 16-year old Palestinian in November 2013. We could also mention the 13 year old and 15 year old Palestinian minors who stabbed a 13 year old Israeli boy in Pisgat Zeev in October 2015. We could even mention 17 year-old Hakim Awaad who murdered five members of the Fogel family in Itamar, including a four year old baby, a four year old child and an eleven year old child. We could mention these instances of minor-on-minor violence; indeed we are compelled to mention them because many MPs who describe themselves as ‘Friends of Palestine’ fail to do so.

We should also reflect on the response in the UK when we had youths on our streets for a few nights in 2011 hurling missiles at the police and our fellow civilians. The country was outraged, mass arrests of youths were required and many people in this country called for the army to be deployed to quell these rights. That was the response in this country after just a few nights of rioting, whereas Israeli security forces face this onslaught almost daily and, given the circumstances, respond in a measured way.

The information about Palestinian minors Sarah and others choose to omit is vital, and much of what is claimed is factually incorrect. In an earlier article on the Huffington Post website, Sarah claimed that “soldiers have no obligation to inform [the children] of their rights”, adding “they’ll see their lawyer for the first time once they are in court, not during detention/interrogation”. These bold assertions are plainly false: Palestinian minors detained in the West Bank have a right to an attorney, who must be informed of any investigation, in order to provide the minor with legal counsel. Sarah ludicrously claims Israel’s detentions of minors amount to “a war crime”, when Israel’s Military Justice system was established and operates in accordance with the Geneva Conventions.

The simple truth is that the Palestinian Authority fails to deal adequately with minors assaulting Israelis, providing Israel with no viable alternative to detention. I passionately want to see fewer Palestinian young people arrested, but so long as the PA fails to engage with Israel on alternatives to detention, the Israeli administration is faced with no alternative. It is also worth noting that those who criticise Israel on this issue, fail to mention the thousands more arrests of Palestinian children by the Palestinian police force and the allegations of abuse and beatings at their hands, as reported by Palestinian NGOs.

Quite perversely, the PA nurtures an environment where children learn that attacking Israelis is somehow a noble cause. Palestinian youths grow up in streets bearing the names of Palestinian killers, and attend football stadia named after terrorist murderers. Terror groups instil hatred by indoctrinating children to achieve their political goals, whilst recruiting from amongst the young. Terrorists impress upon these malleable children their murderous and twisted ideology.

We must ask questions of the Israeli government on this issue and encourage them to make further improvements and where, as much as possible, ensure that the judicial system in the West Bank, mirrors that of the civilian system in Israel. Those are legitimate questions to ask and ones that will be willingly acknowledged in democratic Israel.

It is also important, however, to take an active role in encouraging Palestinian society to promote positive role models for children. Too many of those who take part in this debate have nothing to say on these issues, they never mention Palestinian incitement, and they refuse to hold the PA to account for its failings.

So long as advocates continue to ignore these issues, they are not helping Palestinian children. These children will just continue to be subjected to a poisonous stream of incitement and hate that manifests itself in 13 and 15 year old Palestinians walking the streets of Jerusalem with knives intent on stabbing innocent Israelis. This is an ideology that teaches children that if they die trying to killing innocent Israelis then they will be heroes, and possibly honoured with a school in their name! If those who claim to care about Palestinian youth really want to help then they must start asking tough and searching questions of the Palestinians, just as they do of Israel. Simply relying on the binary ‘Israel bad, Palestinians victims’ narrative risks condemning the next generation of Palestinians to a further cycle of hate and violence.

About the Author
Andrew Percy is a British Member of Parliament, from the Conservative Party.
Comments