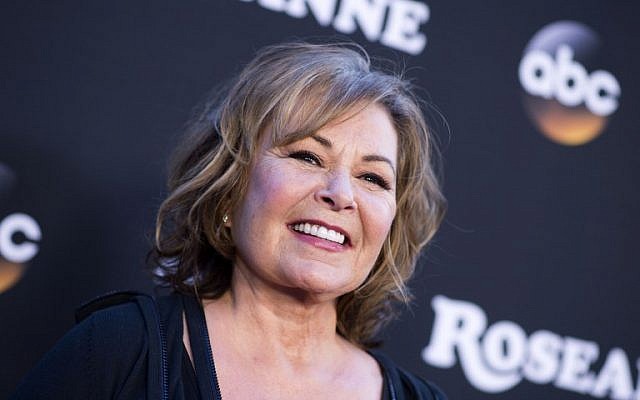 This morning, as I walked the streets of Israel and saw teens racing to their bus, I noticed the camaraderie of black and white friends and I wondered why I do not have any feelings or notions of racism inside me? From where did I learn not to let the thoughts of racism ever enter my worldview?

At that moment I realized that besides my great and noble Parents who taught me that all human beings are created in the Image of G-d and must be treated as such, there was another influence in my life who had reinforced my views about race and the harmony of all.

And immediately flashed before my eyes was the one and only, Ms. Roseanne Barr. But how could that be? Isn’t she that terrible person that hates black people, and believes the worst about them?

And it was then as the kids were boarding the bus that I remembered how Roseanne Barr influenced me and my subconscious mind over 24 years ago with one TV episode. I recalled how one TV show reinforced my Parents’ teaching about equality. How one TV show so implanted in me the feelings of respect, appreciation, and love due to all human beings that I could not forget it. Nor will I ever forget it. How one TV show would give me the moral courage to stand up to bigotry, racism and social injustice.

Immediately I googled that show. And there it was. The show that
had left an everlasting impression on me to be accepting and respectful of others. A moral and ethical lesson from a TV mom who in 1994 had the courage to tell her millions of children – students – viewers around the world that, “Hey. Black people are just like us. They are every bit as good as us.”

And as I played that episode which was posted on Youtube on December 21, 2015, entitled,

“Rosanne Barr Telling the Truth about Race!”
uploaded by x6Blood1Hound4x

Dan and Roseanne find out that D.J. wants to skip participating in his school play because he has to kiss a black girl, and is uncomfortable about it.

And so the dialogue between D.J., Dan and Roseanne took place.

Dan: Son. No matter what it is? You can tell us. Is it because she is black?

Roseanne: Yes. We will. I did not raise you to be some little bigot.

DJ: I just don’t want to kiss her.

Roseanne: Hey. Black people are just like us They are every bit as good as us….

I beheld not only the truth about “race,” but also the sad truth about how a moral giant of human rights is being thrown under the bus and being misrepresented because she dared the PC establishment with her quest for truth, questioning their extreme negative views about Israel, BDS, Zionism, and Trump’s extraordinary success in both domestic and foreign arenas.

From 1988 and until now, the Roseanne Barr show literally caused a social revolution felt to this day, which still empowers women, races, people of various religions, and orientations.

Thirty years ago, Roseanne Barr, a woman, a Jewish woman who had to overcome anti-Semitism and fatism appeared on network television. She not only took America by storm but the world at large as well. A woman so smart, daring, and socially controversial that people from all creeds, color, gender, religion, and orientations had to take note of and listen to.

Overnight, this woman became the working class beacon of social justice that dared showed that a populist TV show was not about dumbing down issues but rather demonstrating that working class America could think, reason, and had moral ethical values about recognizing the humanity and dignity in one’s fellow citizen and human being.

This woman became America’s teacher, and for that matter, a teacher to a generation of men and women and boys and girls. She would teach morals, ethics, and the equality of all through a fictional show based on reality. That woman was and is Roseanne Barr. And until May 29, 2018, Roseanne Barr was the Abraham Lincoln of Women’s rights, Black Rights, Sexual Orientation Rights, and Religious Rights.

In a nutshell, Roseanne was the revolutionary that was recognized as the trailblazer for Human Rights. And overnight, in one tweet the giant of television became the devil incarnate.

But is she Satan?

For years even though I respected her views on Human Rights I was disturbed about her views about Israel and Zionism until I heard her brilliant speech about the wickedness of BDS and its diabolical anti-Semitic agenda to destroy the democratic Jewish State.

I was so impressed with her and her ability to seek the truth that I reached out to her. In a course of nearly a year of conversations, I truly learned of her genuine compassion for others, her respect for all human beings, her drive and need to fight bigotry, evil and hate, and of her quest, since she was a little girl, for the Utopian Messianic dream. Whereby all human beings will recognize the G-dliness in themselves and others, and G-d, as the Creator of All, thus creating a world of everlasting peace, equality, justice, love, and forgiveness.

In one tweet the extreme PC world forgot that most of their ideas of social justice were heralded by Roseanne herself. Suddenly they forgot her kindness, her moral courage, her love for all and her social revolution that she set ablaze for the last 30 years.

Suddenly, all she did was if she never did. Suddenly, she was dethroned. Suddenly, her own cast members, who knew her over 30 years, abandoned her. Suddenly, she became the “hateful, anti-semitic, racist, villainess.”

Her tweet was a political comment about extreme groups uniting to shut down the freedom of speech in America and around the world.

And her badly worded tweet was the exact ammunition the extremists needed to defame her and shut her up.

But what is so sad is not what her enemies did.
What is so tragic is how her friends betrayed and abandoned her.

But, I, as a man who was raised to fight for the truth and never to abandon those that are maligned will not abandon Roseanne.
I will not her be bullied and shoved into the dustpan of TV history to be silenced.

She is too a great and good of a human being who has literally brought social justice and human rights to millions.

For all those women, races, religions, and the downtrodden in society who benefited because of Roseanne’s brilliance and moral courage
they cannot abandon Roseanne.

For all those women, races, religions, and the downtrodden in society
that yet need her, We cannot abandon Roseanne.

We must remind the world that until May 29, 2018, Roseanne was society’s teacher to millions about the incredible Torah commandment of “Love thy neighbor as Yourself”.

And that one badly worded tweet cannot and should not take her glorious deeds away from her, nor her continued presence to enlighten lives, minds, and souls.

Let us set social media aflame with “Justice for Roseanne”!